Ektomorf - What Doesn't Kill Me 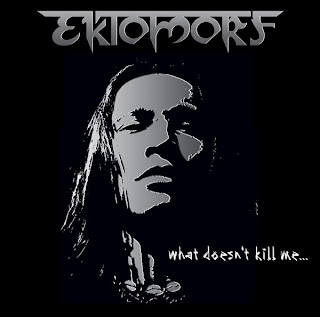 On one side of this line, it can be insipid, self gratifying, meathead music. On the other side, it can actually be honest, vibrant, and a snapshot of one’s mental anguish over deeds done wrong. From that line, the drop to negative is an incredibly steep drop to the bowels of derisive mockery. The reward from walking this treacherous, corpse ridden line is that those who survive and do it right, come out with a product that can excite and inspire all who believe in it. A Hungarian bunch figured out the proper steps along the path. They call themselves Ektomorf, and to be honest, I wasn’t expecting too much from this offering (I’ve been feeling negative with submissions of late.) What I got when I dropped the needle on the record was an overwhelming sense that these guys were pissed off about something and I too suddenly wanted to run amok and break shit. What has come over me? I’ve heard angst-y music before and most times I find myself thinking, “Really? Is it all that bad?” With Ektomorf, I finally felt the angst that these other bands so fruitlessly tried to pass off. I felt the bitter resentment of physical, mental, and emotional persecution. I felt the pain, and the hatred, and the violent need to react with force. What Doesn’t Kill Me is a cathartic release of demons that possessed a group of guys from a small, impoverished nation, and frankly, I’m buying what they’re selling.
“Rat War” crushes through the walls like a tank! The tune is a detuned, throbbing groove number, reminding me at times of Streetcleaner era Godflesh. It’s heavy as all hell, aggressive, unrelenting, punishing with its low end power, and to the point without meandering to some deeper psychological meaning to it all. It’s all about dealing with the cock mangler’s who try to keep us down. Fighting the power with a clenched fist and a violent mind, standing up for your rights regardless of how beaten down you are. Anthemic in spirit, punk rock in attitude, this is the kind of song that goes with a cup of coffee better than a dozen glazed donuts. High energy from start to finish, “Rat War” immediately grabbed my attention and made me reassess my previous feelings about angst laden metal. Being just a hair over two minutes long, this song is perfectly penned to capture the essence of the pure, unadulterated revilement towards the status quo in a concise manner. Finally . . . a band that’s come along who can deliver the goods, as the great Rob Halford would say. But, would the rest of the album hold this kind of intensity? 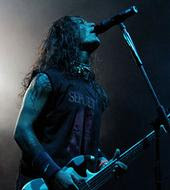 Whoa! “Nothing Left” picks up exactly where “Rat War” left off. A bit slower in tempo, but the intensity is more than adequate. Again, overwhelmingly heavy, it’s filled with great breaks and enough instrumental texture to keep the song from sounding like a standard 4/4 beat down. Most importantly, the message comes across loud and clear, never once feeling like the nonsensical ranting of a privileged pretty boy. The honest delivery of the vocals, filled with enough venom to kill upon contact, take center stage as the music crushes small villages that stand in its way. One part hardcore, one part metal, one part industrial . . . damn, Ektomorf have pretty much covered all of the musical styles that have no problem flexing muscle. Though, What Doesn’t Kill Me is a bit one dimensional, in that there aren’t a whole lot of a variations of emotion, the band does an excellent job of adding slight textural wrinkles within the music to keep it interesting.
The workout song of the decade is the title track. “What Doesn’t Kill Me” is the perfect mindset for this album and aptly captures the mood for the entire album. The tune is a chugga-chugga fest, packed with intense guitar riffery and the kind of attitude that usually starts a riot. Again, the vocals are like a steel trash can being crushed over the back of the head. In your face, filled with rage, and perfectly reflecting the attitude that this dude’s had enough of the bullshit. He’s faced the ridicule and torment of social inequality, and he’s stronger from it. This is a bad ass tune! 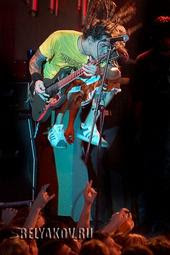 Fairly simplistic in structure, the songs on What Doesn’t Kill Me follow the rule of simple is beautiful, or at least, sometimes the simple ways are the better ways. Let’s face it, What Doesn’t Kill Me isn’t going to win any awards for Breakthrough Technical Album of the Year, but that’s not the point of the album. As the vocalist so eloquently states at the beginning of “Love and Live,” “all I feel is pain!” this album is about that pain and dealing with it, whether it be strictly through the conviction of beliefs or fighting against the oppressive forces that have turned the perception of the world black. This is the first time that I’ve ever felt an angst ridden metal album come across so damn honest! On more than one occasion while living with this album, I’ve pictured with my mind’s eye being so frustrated with life that I’ve holed myself away in my closet and screamed at the top of my lungs for the world to die. Every negative emotion that runs through our being has to be released and Ektomorf have exorcised those demons in concise and systematic fashion. There’s not much else to say about this. If you’re in need of an album that’s gonna’ get the blood flowing, whether it be for a physical work out, getting pumped up for that big sales meeting, or just getting out of bed, What Doesn’t Kill Me is the album that should be within arm’s reach. - Pope JTE