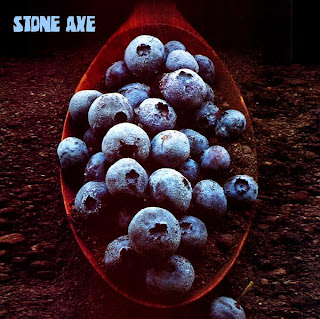 There's a famous line in a movie that goes, "You had me at hello." That sums up my experience with Stone Axe.

Sometimes it doesn't take much to hook you, to grab you, to reel you in like some thrashing marlin off the coast of Baja. And I'll tell you, it only took 1 (count it, one) second of the first track of Stone Axe's debut album to know that I was hooked. If I was a marlin you could just go ahead and drag me into the good Stone Axe fishing boat, gut me, hang me up by my heels and weigh me. Oh heck, stuff me and stick me on the wall of the Stone Axe pub because I ain't going anywhere.

Stone Axe is the creation of Mos Generator guitarist Tony Reed and The Swinos vocalist Dru Brinkerhoff and should be adorning the shelves of all fans of big time, blues-injected classic rock like Free, Bad Company, and early Moody/Marsden Whitesnake. I saw this album referred to as "stoner rock," on some random music zine, but I gotta disagree. That's really just lazy publishing. Not all retro-70's, big riff rock and roll is "stoner," just like those bands I mentioned aren't stoner. No, this is big time, ball bashing, groove-laden, riff mongering blues and roll, directly related to those bands from the past, but streamlined right here into our future. 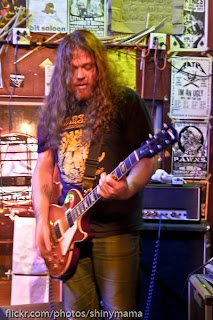 Now that first second of "Riders of the Night," starts off with a greasy and nasty, slightly grungy, big-time blues riff of the type that'd make Mick Ralphs cry with appreciation. Tony Reed immediately blows my mind with his guitar work, toning down the fuzz from Mos Generator and cranking up the bluesy savagery. But he's not content to stop there. No, Master Reed has to go on to prove that he's just as accomplished on the bass and drums. Yes, he plays every instrument here. And I'm not just talking, keeping-time 4/4 drumming. Tony drops in some subtle flourishes on the high hat, some tasty fills, and a generally grooving beat. When Dru drops in his vocals about 15 seconds in, be prepared. This cat is a revelation. His tone and timber are as reminiscent of Paul Rogers as I've heard in ages. And it sounds perfectly natural, not forced, just deeply soulful, heavily emotional, and perfectly toned. If I played this song unannounced, I bet 9 out of ten dentists would think it was Free playing. This is a lost classic track from the '70's that we've always loved yet for some reason haven't heard in ages. But thank God it's here now.

"My Darkest Days," begins with a rumbling bass tone, accompanied by some gentle acoustic guitar, and a touch of Cream psychedelia. Dru's voice takes on a more David Coverdale tone here, reaching deep down to pull out every ounce of it's emotion. And lest you think for a minute that isn't a compliment, just remember that before the John Sykes era, The Cov was undeniably one of the best blues rock belters out there. Some nice wahed guitar burst in through the ominous beat, surrounded by thundering percussion, and some swirling keys, bringing on a Zep feeling.

"Black Widow," is one of the main standout tracks on a disc full of standouts. Think early AC/DC as inspiration for the opening guitar, but Dru jumps right into his deeply Coverdale vocals here tossing this song right back to the glory days of early Whitesnake. Perhaps for no definable reason this song reminds me of Whitesnake's "Blind Man," but referencing isn't necessary. This is one rolling, rumbling, mean and nasty blues rock jam, percolating with a passionate, sensual energy, nearly sultry in the way the groove lays out, like a dangerous woman spreading her legs across your bed. Tony's fingers fly from one riff to another, dropping in a tasteful solo, before Dru launches back in with that amazing voice. Seriously, if you're a fan of the vocals of Paul Rogers or the Cov, you need to check this one out. 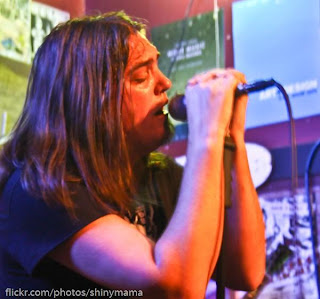 "Shining On," moves quickly through another Zeppelin inspired polyrhythmic blast, right into "There's Be Days," who's loose strung strumming instantly captivates. As the guitars pick up, strumming and picking in nice overdubs, Dru comes in, belting it out like Rod Stewart in his early (and still listenable) Maggie Mae days. "The Skylah Rae," ushers in a touch of the psychedelic for a freeform spacey ride on a cosmic ship journeying through the outer reaches of our galaxy. Slightly muted in production, mirroring the space theme, this song grows in power on it's looping bassline, gaining momentum, building in intensity. Dru gives another masterful vocal performance while Tony throws just about every trick he knows, and makes up a few new ones, with his drumming, guitars and bass. The epic centerpiece of the album, it shouldn't be missed.

Some nasty fuzz greets us with "Rhinoceros," shades of early AC/DC rides through "Diamonds and Fools," all the way to the surprising Thin Lizzy-esque closer "Taking Me Home," proving that Tony and Dru have digested a vast assortment of influences and digested them well before bringing their own meal to the table.

In the end a vastly satisfying album, infused with a genuine passion and love of the classic '70's rock. It's like Mr. Wizard dialed the 1970's into his wayback machine, grabbed the best of the lot and dropped it right here into the lap of the two dudes capable of bringing it all back to life, as big and beautiful as it ever was, and revved up for the current day. This is straight on rust and whiskey blues rock and roll, remarkable in it's depth and warmth, brimming with authenticity and moxie. I've seen that the album and some singles are available on vinyl and that would be the absolute best way to savor each texture the guys create here.

Yep, count me glad to be caught and hanging on that pub wall. If this is the house band, there just aren't too many better places to be.

Right there with you on this one... an excellent album. All those Free, Bad Co. and "proper" Whitesnake similarities hit my spot! "There'd Be Days" tho' - great song... pure FACES!!!

I'm blown away by the kind words here and thank you dearly for this descriptive review. We are most appreciative. Thank you

No need to thank us. You're the guys that did all the work, making the music - a damn fine album- all we do is write about it.

Stone Axe on tour in Zeptember! Brooklyn show with Sun Gods In Exile and Mighty High. Book your flights now!

Killer review. I am one of the few lucky ones that have been witness to this band's rise over the past couple years. These guys lay it down live, and by all means you should see them if they are in your area soon.

This is some bad-ass, straight-ahead ROCK AND ROLL.