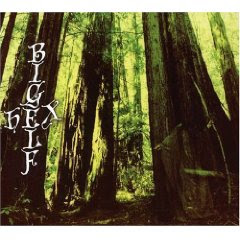 There's an old saying that goes something like this. "Though I walk through the valley of the shadow of death . . . I wouldn't want to set up camp there." I think the same thing could be said for Damon Fox's mind.

The main architect of the glorious doom, bombastic glam that is Bigelf, Damon's mind is not a safe place for the uninitiated. No one knows what's lingering behind each synapse, hiding between the axons, lurking within the dendrites.

Last year, I thought I was going out on a limb when I named Bigelf's mind staggering album, Cheat the Gallows, my number one heavy album released in 2008. Turns out, many other of the contributors to that Best of List, felt similarly, adding Cheat the Gallows to their lists as well. Well, I got news for you. In 2007 the Bigelvin men released an album Hex, that in many ways is just as impressive, and certainly heavier, than Gallows. If it had been released this year, it would already have the top spot nailed down.

Released on Custard Records, Hex explores the same virtual roads of insanity that Gallows explored but if anything, it's an even darker, heavier affair. Whereas Gallows was a momentary visit to a darkly demented carnival, Hex is a full-time institutionalization into the asylum. The same big flourishes of Alice Cooper, Pink Floyd, and Sabbath can be found but some of the more pomp rock ELO-isms of Gallows instead are replaced with the riff-mongering flavor of Off the Record-era Sweet. In all, it's a massive, gut-wrenching, sanity-defying journey through the chasms of one man's incredibly twisted brain, and what a staggering feat of beauty that is. 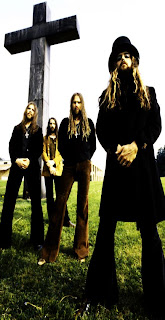 "Madhatter," starts this affair off, our admission to the Mental Home, heaps of massive Sabbath riffery puling under the maniacal laughter of hordes of insane minds. Big glam flourishes layer across as the song launches headlong into the "Another Brick in the Wall,"-style verses. Damon Fox's voice is in fine form, sounding substantially like that monstrous demon living inside my head, calling out all my darkest fears. Everything about this song rocks harder than most of the tracks on Gallows. Just listen to the scratch guitar as the verse breaks down into the chorus. Seriously, it's hard to find words to describe the intensity of this song and the freakishly strong craft. It's big, it's loud, it's bombastic. It's over-the-top and nearly psychotic. It is just a fucking masterpiece of demented rock. Bigelf make it clear that they operate in a dark dimension all of their own making.

Macabre prog I call it, and if that label sticks, then I'm selling it!

"Bats in the Belfry II," reaffirms that Damon Fox's mind is a horrifying place to visit. Huge synth washes flow over the densely Roger Water's-esque Pink Floydism of the song. Big organ tone and acoustic guitars layer on, the whole song building slowly, adding to the weight of it's own mental instability. "Pain Killers," attacks us next, turning up the amplitude big time. Riding some chugging riffing into its huge explosion of purple nail-polish, dark-twisted glam. This is Sweet after a long weekend of downers, trapped in a Halloween haunted house with no hope for escape. The riff here lays out perfectly with Fox's vocals, building tension through the horror show that lives inside his skull. Hollow-eyed patients pass you in the hallways. Slobbering, raving lunatics eat paint chips off the wall. Sadistic orderlies laugh themselves silly preparing your next acidic enema. This is no Happy Homes resting ground, this is Damon Fox's asylum from Hell, and no medication can make the visions go away.

"Disappear," brings on a jazzier vibe, changing pace, just like the boys did so effectively with Gallows. A beautiful, haunting bass line leads us in gently, gingerly, like we're being guided by some old man who we don't really trust and fear he could mutate into an ancient slobbering skeleton at any time. Pink Floyd lives here big time, camping out in the synth washes, the choral structure, the dynamic of tension and release. The song plays out like a moment of respite from the sheer insanity that is Bigelf, but in reality its a false lull, a dishonest moment of security. In reality we're being strapped down to the cold steel table in the asylum, the demons hiding just out of reach, ready to pounce at a moment's notice. Damon sings this one with remarkable depth and emotion in his voice, the whole shebang leading to some tasty guitar work from Ace Mark. A troubling, unsettling, starkly terrifying song, and beautiful because of it. 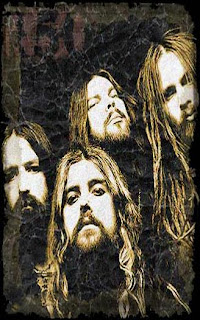 Your journey through the asylum continues through the "Have a Cigar,"-isms of "Rock and Roll Contract," the just-downright glam riff-rocking of "Sunshine Suicide." It's circular riff reminds me of the Beatles "Day Tripper," but from darkened alter-dimensions. Running down the peeling hallways, past the mad-laughing inmates strapped in their straitjackets, "Falling Bombs," explodes out of the asylum P.A. system in one pounding wave of bombast after another. Damon's voice takes us to new heights of anxiety as he wails through the chorus of "Falling Bombs," Duffy Snowhill's bass and Froth's drumming beating down on us with the oppressive force of the orderlies cattleprod.

Finally, herded into the corner by the crazed staff, "Black Moth," erupts as the physical embodiment of all of your darkest fears. Like the best of Alice Cooper, Damon locks onto his twisted muse, the Black Moth being symbolic of every one of his deepest nightmares. Yet throughout all of the sheer horror, and throughout the whole album, Fox manages to contrast the sheer heaviness of his macabre vision with some glorious melodies and moments of pure artistic beauty and genius. Not an easy feat when the subject matter is this dark, but one Fox seems to handle effortlessly.

But the institutionalization doesn't stop there. All the way to the end, a hidden track, early (demo?) version of their hit "Money, it's Pure Evil," there are no safe moments here. Bigelf never drop down to rely on rock conventions or cliches. With screams of madness rampaging through the darkened corridors, Fox just keeps on digging deeper, and deeper into the human psyche. Not liking very much what he finds there. But perhaps this is best put in Fox's own words from the track "Carry the Load." "There's no treatment for what I've got/leave me here to die and then rot."

Yep, not a place for the timid.