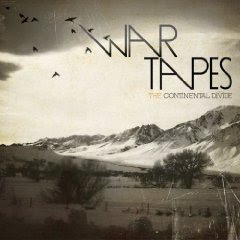 Sometimes there’s something beautiful about a piece of music so deliciously dark. It may seem like a somewhat odd thing to say in that so many of us have been born and bred to believe darkness equals bad. But the truth of the matter is that there can be beauty in all things not just that which society deems acceptable. Enter War Tapes. Now, I don’t want you Waveriders thinking that these guys are some morbidly dark, simmering evil cavalcade of church burning metalheads. Far from it! These guys harness the dark arts much the way bands like Depeche Mode or The Cure would do. Finding those sullen tones, morose vibes, and using gloomy imagery to create a quasi-gothic sound that borrows as much from that of the 80’s sound as they do more modern stylings.
The Continental Divide is a complex album that really shows two aspects of War Tapes. On one hand, there’s a ton of hugely melodic and pop sensible numbers, on the other hand, those same pop drenched numbers have fair amount of up tempo hard edged rocking going on. Best of both worlds? Perhaps. “The Night Unfolds” kicks the whole thing off with that balls to the wall type of tempo, filled with some incredibly distorted guitars and frenetic rhythms, but layered on top of the dissonant sounds are the rich vocal melodies of Neil Popkin. Sometimes haunting, other times uplifting, but never once boring, Popkin’s vocals add such a variety of texture that it’s practically impossible to think about anything but the lyrics. Even though this track is wide open and full throttle, the band do a great job of keeping it accessible and melodious, and I think a big factor to the sound remaining lush throughout the hectic tempo is the approach of the guitars. Big, fat, and distorted when they need to be, the players found that they can create even more tension by breaking things down and letting the instruments breathe on their own. The more subtle approaches to the guitar work the song to spectacular and create a great mood, and not just on “The Night Unfolds,” but on the entire album.

The dark and brooding “Mind is Ugly” is a haunting standout track. Leaning into the darkened goth-y tones, the song reminds me of the more metallic goth / doom bands like Katatonia or Paradise Lost. Heavy guitars and driving rhythms propel this song into the dissonant arena, but those aforementioned guitar subtleties and the tortured vocal performance plant this song in a genre all to itself. The female vocal harmonies make me want to hide further from the penetrating glare of the sun, prop gargoyles around every gable of my house, and clothe myself in the darkest fabrics known to man. On top of all of the great physical affects that these vocals have on me, they also provide additional texture to an already vibrant track, giving it deeper dimensions and an air of mystery. Again, the song shows War Tapes ability to meld hard driving rock oriented music with infectious and memorable melodies.
“For Eternity” erupts from the speakers like a long lost Cure song. You almost get the sense that you’re about to hear Robert Smith start crooning about boys crying or being love on some particular day of the week, but instead, the more gravelly timbered voice of Popkin chimes in and takes us in a completely different direction than one might expect. The chorus laden guitar notes channel that great Cure sound, but War Tapes have done a masterful job of adding their own voice to the sounds of the past to create something unique.

“Dreaming of You” is my personal favorite from The Continental Divide, mainly because it speaks to the romantic in me. The lyrics are focused on living life in a dream because it’s just easier to get what you want that way. The vocal performance at the chorus comes across so damn compelling that I fall head over heels into Popkin’s dream world. I would so much rather live in a world where I get what I want rather than live in a world of continued disappointment and subsequent misery. And, though the lyrics tug on the heart strings, the words would feel less complete if it weren’t for that awesome melody! The composition of the song is solid, the individual performances sell the soul, and the subject matter is something that most people can relate to. This is a shit hot song!
What more need be said? The Continental Divide is a strong disc that gets better with every listen, though quite honestly, War Tapes had me from the first struck notes. It’s an album that will have you staring out the window during the next rain storm, your mind wandering to that one person who touched your heart the most . . . or the worst. Stellar musicianship, especially in the way of the guitars. These guys have captured the guitar sound that made The Cure so damned lovable, but with a touch of modern pop / rock sensibility. And the vocals . . . can’t get enough of that deep rumbling sound emitting from the diaphragm of Neil Popkin. Strong marks and I highly recommend y’all check this one out. - Pope JTE

GRIT PR said…
Here's some deliciously dark pop for you...
The powerful and enigmatic Johnny Indovina fronted the critically acclaimed band of the late 80's and 90's, Human Drama. The band made its mark on the Los Angeles music scene, then the national scene...a mark that has barely faded despite the decades that have passed.  In 2006, Indovina debuted his new group, Sound of the Blue Heart, with the album titled ...Beauty?  On July 14 the second release from Sound of the Blue Heart will be released.  It is titled Wind of Change and 2 singles are currently available on iTunes, Rhapsody, etc. It features some of Indovina's best work to date.
www.soundoftheblueheart.com
www.myspace.com/soundoftheblueheart
www.reverbnation.com/soundoftheblueheart
June 18, 2009 at 2:54 PM