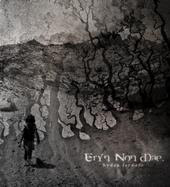 We reported a few months back that the doomy and droning French extreme metallic unit END. had signed with Metal Blade and that they had a new album in the works. All of that is true. So true, in fact, that you can now pre-order the album from Eryn Non Dae.’s official web and MySpace pages. Joining us this week, we were lucky enough to track down guitarist, Franck, and entice him with a comfy seat on the red leather couch. Little did he know that he was the latest victim for our Sunday Conversation piece, and I don’t think he realized the intoxicating napping power held within the cushions of said sofa. Read on and see what Franck had to offer in his band’s approach to creating the sonic bedlam that Eryn Non Dae. does so damn well.

Eryn Non Dae. just signed a record deal with Metal Blade. How do expect this deal to further the career of the band? Will it allow the band to greater develop the sound that’s already been touched on with your EP The Never Ending Whirl of Confusion, or is more of a case that it will help with the distribution of the bands material?
Exactly! Having signed with Metal Blade gonna help the band to gain in notoriety and we are so happy about that! It is hope that with this signature we will quickly find a large booking agency in order to tour everywhere! And, of course, doing a lot of interviews to make ourselves known. Then, our sound is the same as before the signature with Metal Blade, it will never change because it is a part of END.'s entity... And that's also the songs that are finally giving a sound to the band.
You have a new album poised to be released in the very near future that was recorded at Conkrete Studios. What can you tell us about the musical direction of the new album?
This album « Hydra Lernaia » is the result of 2 years of hard work that followed the EP. We have digested all of our influences and I think I can even say we’ve finally found our own identity... All the instruments and the vocals are much more wide and varied. Some songs are fast, some others are slow, mid tempo. Some songs have many riffs and some others not. All of that finally gives a varied album.

Eryne Non Dae. features some of the heaviest low end production that I’ve heard in a long time. How much input did your producer, Mobo, have in getting this dense tone?
Thank you! As I said before, the songs and the tuning that you use for your instrument already bring an identity to the sound. It's true that Mobo, already for the EP, has worked on the bass in a more precise way... He's a bass player too, that's why!!! So, the bass is there for much in this compact and low frequency sound... Afterwards, with 3 tracks for the bass, the « mammoth sound » is not so far!!!
With my recent discoveries of bands such as yours, Hacride, Hypno5e, Hollow Corp., and a whole mess of others, have you noticed anything specific in the way of a new musical movement in France? Or, has France always had such a vibrant underground movement?
Nevertheless France has had a metal scene for more than 20 years! With the Gojira effect the whole world wonders, whether like Sepultura at the time for Brazil, if it's the first French band! But actually not, Loudblast, a few years before had an international notoriety for instance. France always had a metal scene but it's true that recently, a lot of good bands have arrived in front of the international scene and that's great!
Who are some of the local, unheard of bands that you particularly like that the world needs to hear about?
As regards the Toulouse region there are the excellent Ethersens, Naïve, and Carrecube which works rather in a dark rock'n'roll. Not far from on our premises you have Ananta, Minus Human... In France in general we like much JenX, Scarve and Hacride but they are already well known.
I would like to quote Benea Reach which is an awesome Norwegian band… 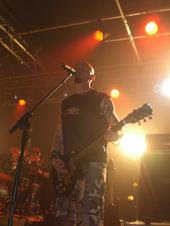 What demons are you trying to exorcise by playing the music that you do? Is the extremity of the music a by-product of social or political conditions in your country?
We exorcize our anger towards the human being and his behavior in all the aspects of the social and economical life, towards the nature, the animals, and the ego which animates it and I pass from there... The world in which we live is directed by the man and he is the only one in charge of what occurs and will occur… And considering the current situation, it puts us in a good state of mind for the creativity...

Genres are so misleading and such a way to pigeonhole bands. Without resorting to labels, how would you describe your music?
I would describe it as dark, apocalyptic and hypnotic.
When you write a piece of music, do you consciously write from the mind set of being different than what's out there now?
We think about it indeed but it's extremely hard! Any artist, human being is influenced thus it is very hard, and more and more over the years, to find an « original » style. So many things were already done in music!
Initially, we wish not to make the same song again and again and then yes, we seek to have our personal trick. To be up-to-date of what is currently done, not thank you. 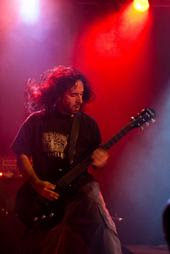 Who are your “gods” in the way of musical influences? Are there influences out there that one might find out of the ordinary?
Metallica of course!!!!!!!!!!!!!!! I started with them and then I discovered Sepultura and Machine Head. But you see, they are not necessarily a musical influence. Meshuggah and Neurosis have a print on END.'s music. Tom Waits can also influence us for his dark, wobbly and alive side from the point of view of the recording studio…
If the makers of Guitar Hero approached you about doing a version of the game with Eryn Non Dae., would you jump at the opportunity? Why or why not?
Good question! I really don't know at all because I only know the game by name! I don't play video games at all, I don't even know what does it looks like! So, why not!!!

We, at The Ripple Effect, are constantly looking for new music. When we come to your town, what's the best record store to visit?
I would say Vicious Circle! There you will find discs of bands of the area even into auto-production and foreign bands also… You have full of vinyl so underground music lovers all go there.
Thanks again for taking the time to chat with us. Do you have any words of wisdom for the Waveriders reading this?
Modestly, I would say to them to have a spirit of tolerance, comprehension and to respect all forms of life... Thank you.