The Specimens - The Quick and the Deaf 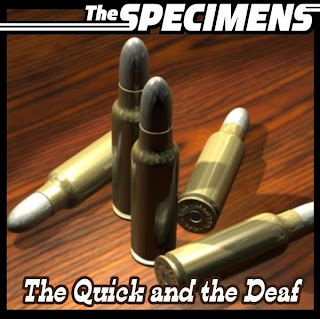 I’ll be the first to admit it. I’m not a big fan of the whole garage rock sound. Just ask Racer. He knows. He’s seen the derisive curl of my lip as he’s played the stuff, and I think he either enjoys tormenting me or he actually prefers my face to look that way. No matter. Today . . . today is the day that I can finally sit back in my office chair and claim to have found an appreciation, nay . . . a love for at least one band that fits the garage rock mold. That band, as I’m sure you ever so brainy Waveriders can be, is The Specimens and I have the fine folk at Zodiac Killer Records to thank for getting this into my hands. And, I suppose I oughta’ thank Racer for not snaking this one off of my pile of goodies. Thanks Racer!
I’m not gonna’ go comparing The Specimens to Jet or The White Stripes or whoever is rummaging around in your garage these days. Quite frankly, I have a hard time telling the difference between most of these guys so I’m sure I’d being doing everyone a disservice by making comparisons. The Quick and the Deaf is fast paced, straight forward rock n’ roll with just enough sleazy edginess to give the whole thing a punk rock vibe. Big walls of distorted guitars, upbeat drum patterns, some outstanding bass licks, and lyrics laden with good old fashioned sexual innuendo make this album the infectious dose of rock that I didn’t realize I was searching for. Basically, The Specimens have brought a sound to my ears that knocked me on the floor, got me back on my feet again, and then did the whole routine one more time for good measure. 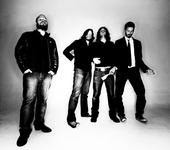 Oddly enough, the album starts off with a sound that almost has me thinking psychedelic groove, but that lasts all of a minute as the band comes in as a cohesive unit playing balls out, hyped up rock n’ roll. The guitars are razor sharp in the mix and cut a mean riff to push “Head Straight” through the back of your skull. The guitar tandem impress throughout this recording in that they provide some of the tastiest and classiest licks! Fairly simple in structure and song composition, the nine songs on The Quick and the Deaf are instantly memorable because of the great hooks like the one featured on the chorus to “Head Straight.” I found that the entire time I was marveling at the guitar work and the vocal performance, my body was bouncing up and down in time with the beat . . . and that’s when I noticed this rhythm section! My God . . . the bass lines, while keeping a perfect groove, are all over the place, dropping unexpected notes here and there, and pushing the song into the soul.
I can’t help but smile when I hear “Get on Top.” The tune is all sorts of fun and my favorite track from the set. The lyrics tell the tale of a guy who doesn’t want to spend the night alone, but is also too lazy to go out and get some . . . let alone go to any work to get himself off once his girl actually show up. So, he then pleads for his girl to “get on top for a ride.” These simple lyrics at the chorus pretty much tell it all, but I defy you to not sing along! The opening riff alone is cool in that you can hear the guitarist in the right speakers just pushing his pick through the strings, the muted distortion suddenly opens up and the main riff explodes with all that sleazy sexual tension. The band works well together, feeding off of each other’s attributes, and the tightness to the performance shines like a spotlight in a mirror factory. Each member of the band is doing his own thing, playing his part, but in such a cohesive manner that the song sounds deceptively simple. When I’m not jumping around like I have springs on my feet, I sit back and marvel at the band members’ individual approach to their work. “Get on Top” is a gem that should be everybody’s ring tone on their cell phone.

“Kiss on the Lips” is another standout. Now, this one I know kicks off sounding like Jet, but outside of that, it’s a bluesy rock n’ roll power house that has The Specimens written all over it. The musicianship on this track is much the same as the rest of the album, it’s just that there’s this incredible dose of energy being pushed through the speakers that this song demands that you move. The guitar work is a swaggering sex-capade, while the rhythm is the ultimate driving force behind this beast. The break at the midpoint of the tune is tight and creates a great amount of open space for the song to build for the searing guitar solos to soar. I think I figured out why I like this stuff so much more than much of the other garage rock stuff . . . the production. The production is dead nuts on with every instrument audible over the other, yet so well mixed that it all works well together.
The Quick and the Deaf was released in 2007 and The Specimens have a new disc lingering out there called Jazz Brutus, so you may want to look into that one as well. The copy of The Quick and the Deaf that I was supplied with features the Burn City Burn E.P. as well as the bands first full length recording, Fast & Loose. The production value on The Quick and the Deaf is immediately apparent when compared to these older recordings. Though still extremely solid works of music (check out the tracks “Shithouse Rat” and “Burn City Burn” and you’ll know where I’m coming from,) the sound quality is lacking in the clarity and crispness that can be found on this later release. I know, some of you “garage purists” will want to hear the music as buried under a pile of wet clothes as possible, but not me. I love that I was able to hear each instrument defined unto itself and how the band worked together to create their end masterpiece. Think of it this way . . . I like my garage clean and organized. It’s easiest to find what I’m looking for when I need it the most. - Pope JTE

Amazing album! I'm suprised The Specimens didn't end up bigger than Jet, they were definietly one of the best rock bands that came out of Melbourne.
The singer Terry Opie has a weird new project called 'Killing Liars'
www.myspace.com/killingliars
Not sure if he has released anything yet. Tim Wold the guitar player has a project 'Russian Roulettes' with Sam Agostino Digger & The Pusycats fame.