Another installment in our Musical Martyrs; the Vilified Albums series. 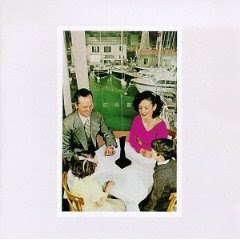 Led Zeppelin’s 1976 album Presence is the overlooked step child in their discography.

A lot of Zep fans will say it’s their worst album but will also admit to not listening to it for many years. But most serious Zep fanatics will claim it as a favorite alongside Led Zeppelin III. The truth is that Presence is not their best album or an all time classic like I, II or IV but it’s way better than Houses Of The Holy or In Through The Out Door. It’s Jimmy Page’s favorite and it’s the only Zep record I listen to in its entirety. There’s also the bugged out record cover designed by Hipgnosis with “The Object” as a part of everyone’s daily life. Somedon’t care for the art but the stark graphics match the mood of the music quite well.
The album was written mainly in Malibu, California by Jimmy Page and Robert Plant towards the end of 1975. Plant had been in a bad car accident that forced the cancellation of a big world tour. Conspiracy theorists say this is the beginning of Led Zep’s back luck mojo that would follow them until John Bonham’s death in 1980. Following the writing sessions the band went to Musicland Studios in Munich, Germany where they recorded and mixed the entire album in less than 3 weeks. Jimmy Page was doing a LOT of drugs back then and has said that he stayed up 2 days straight doing guitar overdubs. This was the fastest the band had recorded since the first album and the sound of it is big, warm and spontaneous. It’s a stripped down sound with lots of guitar and no keyboards. It really sounds like you’re listening to a band playing in the room with you. That’s probably where the title Presence came from.

“Achilles Last Stand” is the thunderous opening song and is one of the absolute jewels in the Zeppelin catalog. Ten minutes ofunrestrained trampling. “Kashmir” has been played to death on the radio since it first came out in 1975. Radio programmers were probably scared of the dark, heavy groove laid down by John Paul Jones and John Bonham. Jimmy Page’s layers of guitar swirl around Robert Plant’s trippy sword & sorcery lyrics. It’s hard to imagine Plant cutting all the vocals on this album from a wheelchair, but that’s what he did. It’s also probably why he’s a little more restrained on this album and there’s less screeching and “OOOOOOH BAAAAABY” stuff going on. You can hear how this song had a huge influence on both Iron Maiden and the Jesus Lizard. Heart had a big hit with “Barracuda” in 1977, which completely apes the rhythm of this song. Jimmy Page is often accused of stealing riffs (and is usually guilty, too) but nothing like this song existed before or since.

The pace relaxes on “For Your Life” with Jimmy putting the whammy bar of a Stratocaster to good use. If you turn it up really loud you can hear it squeaking a little bit because he’s pressing so hard on it while Robert asks if you want “cocaine cocaine cocaine?” This is probably the closest Zeppelin ever got into Rolling Stones territory, probably because Jimmy was becoming a big a junkie as Keith Richards. A good song, but at 6 minutes it could have used a little editing. A wild night in New Orleans inspired the song “Royal Orleans,” named after their preferred hotel in the Crescent City. This is probably the only throw away song on the record. It sounds kind of like a cousin of “The Crunge” from Houses of the Holy. It’s the only songwriting credit for Bonham and Jones on the album. It probably has something to do with a reference to “kissing whiskers.” Rumor has it JPJ woke up with a transvestite in New Orleans once. Maybe Robert and Jimmy figured that cutting him in on the royalties would prevent him from complaining too much. 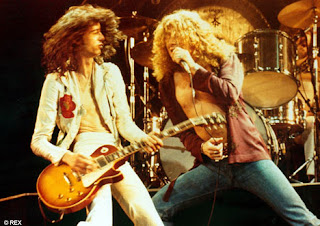 Side two of the original album opened up with the flanged out sounds of “Nobody’s Fault But Mine.” The lyrics are mainly swiped from Blind Willie Johnson and the music is sort of in between Zep’s “Black Dog” and “In The Light.” Clocking in at 6 and a half minutes there’s plenty of time for a good harmonica solo from Plant and a typically great guitar lead from Page. This was the song that got some radio play when the album came out but has long since vanished from classic rock radio’s playlist.

The twisted rockabilly of “Candy Store Rock” is another stand out. The riff sounds kinda like Link Wray trying to play James Brown while Robert Plant pays homage to Elvis. Bonham lays down plenty of tasty fills while JPJ’s rolling bassline keeps everything glued together. “Hots On For Nowhere” was another song from the album that got some radio airplay. Every time this song comes on, I always think about skipping over it because I’m not crazy about the “la la la” chorus but the weird guitar solo always grabs my attention. This is another one that features some heavy Strat whammy dive bombs.


I’ve never been a big fan of when Zep would play a slow blues but “Tea For One” is an exception. This one really captures the feel of the blues. Plant’s vocals are relaxed and it actually sounds like he has the blues and not blue balls. It has a real “last call” feel to it and contains no overt steals from any old blues masters. Buddy Guy could do a great version of this song, who probably inspired it in the first place. It’s almost ten minutes long, but when the groove is this good, what’s the hurry?


Robert Plant has gone on record as saying he’s not happy with Presence and he was not given enough time to recuperate. As mentioned before, a lot of fans don’t like it at all and it’s one of Zep’s poorer catalog sellers – only a mere 3 million copies sold in the US. The follow up, In Through The Out Door, has done 6 million to date and only Coda has sold less, with 1 million. The monster sales of Zep IV is currently at a whopping 23 million and counting.


The tour supporting this album in 1977 was volatile. Recordings attest to the awesome live power of Zep on a good night, like the famous Destroyer bootleg from Cleveland 4/27/77. Then there’s total duds like the show from the Houston Summit 5/21/77. Page sounds completely smacked out. He’ll start some solos brilliantly before they completely fall apart, sometimes they start off bad and get great. Even Bonham had some bad nights on this tour. Insiders say he was dabbling with smack, too around this time. Video footage from Seattle 7/17/77 is also pretty disappointing. The tour ended on a sour note with an ugly, violent incident in Oakland involving promoter Bill Graham’s crew. Not long after that tragedy would strike Robert Plant’s family with the sudden death of his son and it was a very different band that resurfaced in 1979 with In Through The Out Door.
--Woody

Whoa there, way better than Houses the Holy? Sorry, Houses is my favorite Zeppelin album and Presence only beats out In through the out door. Presence isn't bad at all, but it was the first signs of the band losing that shine that was so strong on all of the previous albums. They sound tired and even the best songs sound like leftovers from Physical Graffiti.

I'll agree that Presence is an excellent album. Tunes like Archilles Last Stand blow my mind! What was impressive is the album was recorded while Robert Plant was in a wheelchair!

But was it Zep's finest moment? No. I think Physical Graffiti was their best.

I liked your review, makes me want to give this another listen. Its the only one I don't have on my iPod in its entirety.

I do love most of Houses, but it gets serious demerits from me for "The Crunge" and "D'Yer Mak'er."

Led Zeppelin continues to amaze me til this day.

Presence always gets looked over or easily dissed..
I love this album SO much and I have to listen to it in it's entirety! Page is employing a Telecaster with a String Bender on many of these tracks.. some amazing playing by everyone through these tracks! I would have to place this album in their best top 3..
If you haven't listened to this album ALOT, then your opinion holds no water for me...

I haven't listened to this one in a while.
I'm still diggin those willie dixion covers on 1. Plants voice is so haunting.

But ya, gotta love the opening track to that one, that riff.

Have you ever heard of the band Jet Jagger? You might like them, they are pretty unknown though

"Tea for One" will forever be one of my all-time favorite Zep blues tunes. Masterpiece.