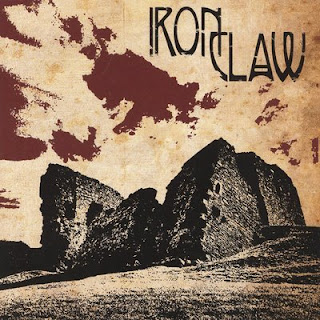 Sometimes, there just ain't no justice.

We've been writing in this column now for almost a year about the blisteringly heavy sounds that were developing during the dawning days of the 1970's as the cheerfulness of psychedelia mutated into an altogether uglier beast we now know as heavy metal. This proto-metal period is a source of endless fascination for us here at the Ripple, as ground zero of all that we know and love as hard and heavy. Lot's of bands toiled away in obscurity, their love for heavy music placing them way out of the mainstream for commercial tastes. Still, somehow, many of these bands found at least part of the audience they deserved.

Then there was Iron Claw.

Scratching and clawing their way out of Scotland like some caged animal chewing at it's tether, Iron Claw were one of the earliest purveyors of thunderously heavy proto-metal. And let me tell you, these guys could play with the best of them. Laying down a brontosaurus-sized riff with enough intensity to make Mr. Iommi blush and a bleak beat that predates sludge metal by a number of decades, Iron Claw crushed everything in their path across the UK from 1969 until 1974. Yet during this time, after recording at many stages throughout their career, they never officially released a single disc. If not for many of their tapes kicking around the underground, they'd be completely lost to the winds of history.

Now, all that has changed, and Rockadrome has lovingly put together a knock-out package, laying down once and for all a proper homage to a band that never got the justice they deserved during their lifetime. Complete with liner notes from founding member Alex Wilson, a complete band line-up roster, artist quotes on each song, tons of photos, and, most importantly, 16 pulverizingly heavy early masterpieces of dirty doom metal, this is a can't miss package for all fans of heavy psych, proto-metal and the early days of doom rock. And let me tell you, this shit is heavy! 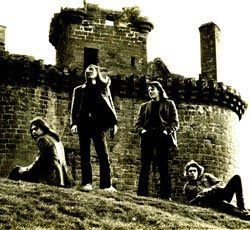 To get an idea where these cats came from, you need to look no further than their origin. Having formed after Alex witnessed Zeppelin playing on their first tour of Britain, the band finally found their direction after hearing Sabbath perform at the Dumfries Youth Club in 1969. Initially, the band was so enamored with Sabbath that their live set was the entire first Black Sabbath LP! Then slowly, they began to write their own material and the real talent of Iron Claw began to emerge. Featuring a guitar player. Jimmy Ronnie, who at 15 already possessed fingers made of electric acid, the boys whipped up a career's worth of seriously mutated, devastatingly heavy psychedelic blues in only a few recording sessions.

The disc presents, roughly chronologically, the bulk of Iron Claw's recorded output, and it's a fascinating study of one band's development and perseverance. The first 5 tracks come from what is known as Mark I of the band, featuring the original line-up. This is by far the most Sabbath derived period of the band, the influence as clear as the ghastly pale on a corpse's face, but that doesn't mean it's entirely derivative. The boy's could whip up their own riffs with macabre intensity, and the low-fi, 4-track recording adds an endearing, garage quality to their fits of doom. "Clawstrophobia," is just what the title suggests, a claustraphobically heavy riff-fest, sound closing in on all sides of that 4-track like a casket closing over your still breathing body. This is the most Sabbath-esque track on the disc, eerie as anything done by the masters, and worthy of appearing next to "The Wizard," or "Black Sabbath." Nearly impossible to believe that the band were nearly all teenagers at the time. "Mist Eye," rides another charging, Sabbath-y proto-metal riff, with a strong vocal wail and a clear hint of the string-bending psychosis that Ronnie was capable of unleashing. "Sabotage," follows a near jazz intro into a monster of a distorted blues riff, enough sting and venom coming from Ronnie's strings to paralyze half the audience. "Crossrocker," is a full-on fuzzed doom assault, while "Skullcrusher," does exactly what the title suggests, imploding unsuspecting temporal bones with sledgehammer heaviness. Each of these are prime examples of the burgeoning heavy metal sound and each stands as a testament to the worthiness of this band as one of the heaviest outfits in their day. Worth buying for these five tracks alone, but the best is yet to come. 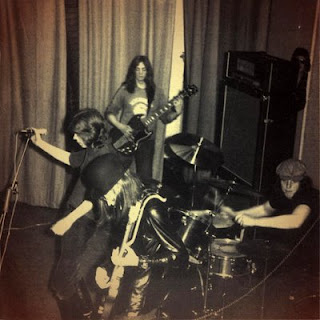 Having laid down these mighty platters of weightitude, Iron Claw finally met Sabbath, but rather that being embraced as brothers-in-arms, they were instead hit with a veiled threat of litigation if their early tapes were ever released. That alone should speak volumes about how much Sabbath was threatened by these upstart Scots! But it also marked the demise of Mark I of the band, the singer leaving in 1971. Undeterred, the band reformed with a new singer and extra guitarist and launched head-long into Mark II of their existence, which quickly morphed to Mark III when that guitarist was asked to leave. This period, Mark III, heralds the real halcyon days for the band. Keeping the inherent heaviness in their groove, but lightening up the affair a touch with more blues base, the boys had grown, learned their instruments, and concentrated on songwriting. "Rock Band Blues," charges like some amphetamine-fueled Deep Purple outtake, sans John Lord's organ. New singer Willie Davidson adds a more soulful tone than before, more confident in his vocals, and positively tears it up in understated fashion through this blues distortion. Ronnie once again proves to be one of the most unheralded, unheard guitarists of his time. His tone and phrasing on his jams here are knock-out mindboggling! "Pavement Artist," follows some grotesque version of a drum solo intro into another drop-dead catchy blues riffing. Echoes of Free reside here, or some proto-version of early Whitesnake, a tone found also in "Strait Jacket," "Gonna Be Free," and the band's one and only attempt at a ballad "All I Really Need." These tracks show a band just brimming with promise and it's a damn shame none of these cuts were released back in the day or else we may be singing a different song with this review about a "lost classic" band.

But, as with most bands that can't find success, the Mark III version vanished when original drummer Ian McDougall quit. The new version of the band adopted a more experimental, free form jam sound producing interesting cuts with "Winter," and "Devils," but nothing to match the pure rudimentary doom of Mark I or the great blues-inflected hard rock of Mark III.

Iron Claw would have remained lost in the deep caves of obscurity if not for the loving attention of Rockadrome, perhaps the industries finest purveyor of resurrecting lost heavy psych. And thank God they did. There's way too much quality early metal on this disc to remain unheard and some doom metal that will cause your socks to drop and your nights to be filled with terror.

Maybe, finally, Iron Claw can get the justice they deserve.

Wow! This is great, never heard of these guys.

Thanks to you guys, there's no way I would have known this great band. Just cannot believe what I am listening to. Subash. www.great-anonymous-albums.com

The more I listen the more I am in awe of this Band. Thanks once again for posting their details. It is sad, the Rock world is sleeping, not having heard them.

For those who may be interested, Iron Claw have a new album due out in August/September 2011. Entitled "A Different Game" it includes 13 new tracks, some of which owe their origins to the early days of the band. this is the album that has taken 42 years to make - the wait has been worth it.