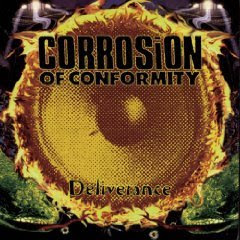 Within the hallowed halls of the Ripple office, I can’t think of any other album so unquestionably revered as this one. Often discussed over a piping hot cup of coffee thick enough to hold a spoon straight up, Deliverance has been crowned on more than one occasion as the perfect metal album. That’s not to say that it’s the heaviest (though it is pretty frickin’ heavy,) or the fastest (though it has some pretty fast shit,) or the most technically proficient (though there are some jaw dropping moments,) or the fiercest (do I really have to go through this?) album in the world. It does, however, capture all of these elements and more. And, maybe that’s what has endeared this slab of distorted and toxic sludgery within our hearts. It’s as balanced a heavy metal album that you’ll find. Downtempo instrumental ditties break up the head bangin’ and heart racing moments, while the up tempo passages pull us from the doldrums of everyday life. Deliverance is an exposed nerve ending that came out when the rest of the music world was busy tapping the vein or capping themselves, and though it may not have been a conscious effort, the music reflected its surroundings.
Let’s just pretend for the better part of this review that Corrosion of Conformity was never a punk band. Let’s just pretend that there was nothing before Blind. I know I’m asking a lot, but let’s forget that C.O.C. existed before guitarist/vocalist Pepper Keenan joined the band. I’m asking you Waveriders to do so because this band needs to be perceived for what it is, or rather, what it’s not. C.O.C. made the transition from a hardcore punk band to heavy metal sludge lords. Yes, they started off playing music fueled by adolescent rage, and guess what? Like all of us, they grew up. Growth. Personal . . . musical . . . emotional . . . maybe they should have changed the band’s name to match this stylistic change, but they didn’t. They’ve moved on, and so should the rest of us. Okay . . . I’m stepping down from my Pope-box and getting into the album now.

“Albatross” and “Clean My Wounds” were the chart topping hits from the album, so odds are that I don’t need to go too much into either of these. For those who don’t know about these two mainstays you should probably know that they’re heavy in detuned Sabbath inspired riffagry, brimming with groove and swagger, and laced with venomous lyrics about Lord only knows. Like most of the lyrics from the band, they can be interpreted in a number of different ways. These two songs in particular could be about drug addiction, suffering through life surrounded by inhumane humans, dealing with the injustices of the world, or ironing a silk shirt. It’s up to you to decide, or better yet, call Pep to get his take on the lyrics. The short story of these two tracks is that the riffs are compelling, especially that of “Clean My Wounds,” and will inevitably have you riff hungry Waveriders coming back for repeated listens.
Lead track “Heaven’s Not Overflowing” is a distortion drenched and feedback laden bear of a tune with a ton of low end and just enough technical guitar knowhow to make the gearheads ears twitch. It’s an up tempo number that sets the stage for the rest of the album by giving the listener a slap with a muddy outstretched palm across a freshly shaven face. Many a speaker has been blown out to the tune as it vibrates the housing of any sound system to the point of failure. Yeah, it’s a dirty sounding tune, but the band did an excellent job of keeping it cohesive and incorporating enough melody to make it memorable and not just an atonal sensory beat down. I’m willing to bet that producer John Custer had a lot to do with keeping the sound coherent through the massive wall of low end that the band was creating.
Interwoven between the dense musical tones, C.O.C. was kind enough to give us short interludes to gather ourselves before the next wave of hard hitting tunes roll in. “Without Wings,” “Mano de Mano,” and “#2121313” are all subtle instrumental pieces, strategically placed within the arrangement of Deliverance to help build the tension of the whole album. Without these tracks, the album would simply lack depth. On first listen, these songs may seem like nothing more than filler, but stop and listen to the tunes, specifically “Without Wings” with its pinched notes and airy acoustic guitars, and you’ll hear that there’s some serious musicality shining between the darkness of the heavier stoned out vibes. Think Zeppelin III to some extent. 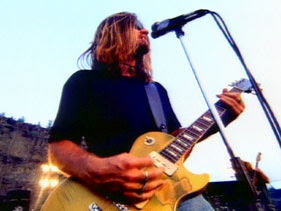 “Senor Limpio” is C.O.C.’s musical equivalent of someone getting brained or, at the very least, sucker punched. The opening riff drops in like a pallet of ceramic tile pushed from a thirty story rooftop. Perfect guitar tones help propel the riff and Pepper’s vocals shift between that crazed out, psychedelic distortion to his straight up whiskey rich bellow, adding a million elements of emotion conveyed through a bevy of vocal utterances. I love drummer Reed Mullins approach on this one as well, as he assaults the bell of his ride, creating that ever so unique chiming sound. You gotta’ remember, back in ’94 we were listening to Pearl Jam mumble on about some guy and his butter, Scott Weiland sounded like he was swallowing his tongue while singing about flies and Vaseline, and that chick from The Cranberries was yodeling about Zombies. And while there was the whole black metal underground scene that was building itself on the ashes of burnt out churches, there was nothing quite this heavy hitting the mainstream. On this track, also pay attention to the guitar interplay between Woody Weatherman and Pepper Keenan. Loose approach and filled with passion and soul.
The title track, “My Grain” with its funked out Mike Dean bass vibe, the acoustic and mournful “Shelter,” and the Sabbath-y doom groove of “Shake like You” are all stand out tracks that deserve high praise. In fact, there’s not a bad track on this album. I never felt that Deliverance so much as fell into the stoner metal category as much as people didn’t know where else to put it, so that’s where they put it. The album’s too thrashy to be stoner, and too sludgey to be Southern rock, and too metal to be punk, and too good to simply be dismissed for not being what people want the band to sound like. Its heavy metal aside from any sub genre and it’s preformed by four cats who wanted to separate themselves from the rest of the music world at that time. Hell, that was fifteen years ago . . . the songs sound just as vital today as they did back then. I stand by that earlier sentiment . . . perfect metal album. - Pope JTE
Buy here: Deliverance

It's not a bad album but seriously I can't pretend that C.O.C didn't exist before Blind. In large part due to the fact that they were a great hardcore/crossover band in the 80's. Pepper Keenan was a destroyer and the original members deserve responsibility for letting him wreck this band. There were and still are far better stoner rock bands than the C.O.C that has existed since Pepper Keenan joined. However there have not been a lot of hardcore bands the caliber of where COC were at between 85-87. I stepping down off my soapbox now.

I like most of COC's stuff but Animosity is still my favorite. Most people don't like the Technocracy line up, but live they were incredible.

Ok, this is hard.

There are some really good songs on Deliverance, my favorite being "Heaven's Not Overflowing."

This is not an amazing album. If it never came into existence, it wouldn't matter -- sorry. It's good, but just good enough to enjoy, but not good enough for you to wake up in the middle of the night and find yourself playing air guitar to it -- which is what worthwhile albums do. (Reign In Blood bitches!)

COC with Pepper is just okay. COC of Animosity fame...is something we'll just have to reminisce about.

I understand where all you guys are coming from, but check this out. Deliverance was the FIRST COC album I ever heard (I'd missed out on the Animosity days, etc.) Playing it over and over one day while cleaning the house, I was stunned by how complete an album it was. They essentially laid down the blueprint for Sludge metal, which hits all the right notes with me.

So, if I imagine Animosity never existed, (which isn't hard for me to do) and only have Deliverance to listen to, I find it a great album. "Clean My Wounds," is an amazing track, as are several others on the disc.

That's not to take anything away from Animosity, it's to ignore that it ever existed. COC is a different band after Pepper joined. Doesn't matter which version I like better. I still find Deliverance an very strong album!

I LOVE this album!

I'm with Racer on this one. Amazing album, one of the best metal albums in the last 20 years. And I grew up with the Animosity stuff, blind was cool but Deliverance was the shit. I love Slayer just as much as anyone but am I the only one who thinks
Reign In Blood is overrated?