Rollins Band - The End of Silence 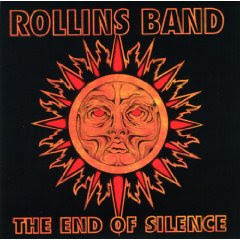 With the breakup of Black Flag in 1986 and the solo career of Henry Rollins taking flight shortly thereafter, the release of The End of Silence in 1992 saw Rollins Band kiss the sun. This is an album that turned heads unlike his previous “solo” releases. The End of Silence is akin to a wide opened, gaping wound being repeatedly bumped into the corner of a wall. It’s raw and when poked . . . it hurts. It’s bursting with emotional intensity both as a personal introspection as well as a social commentary. Heartfelt and passionately intense, this is the album that struck that open nerve and made me pay attention, and subsequently became my guiding light through the haze of adolescent confusion. It’s an album that made me dive deeper into the milieu of my being to figure things out and return a stronger, more focused being.

It’s not just the lyrical content that I’ve found amazing about this album. The End of Silence is jam packed with music that shreds any preconceived notion of what hardcore punk is all about. And, that’s probably because this is anything but a hardcore punk rock album! This album is hopped up rock n’ roll turned up to eleven, just so the notes are that much more distorted and that much more intense. Take “Grip,” for instance, and revel in the musicianship, all workman –like, wreaking havoc on the aural senses. The tune opens with the entire band groovin’ on a heavily distorted blues line before Rollins himself chimes in with a hint of melodic vocals. Underlying the riff, listen to individual musicians. Bassist Andrew Weiss provides a bass line that adds more funk than punk, yet . . . still heavy as all hell. In fact, throughout the song, the bass work is all over the place. Dipping and diving, adding the necessary low end to give the proper amount of weight for Rollins’ rage filled vocals. Now, take that “funky” groove and add the drum work of Sim Cain, which would fit well with any prog-rock outfit, and you have the makings of a truly unique rhythm section. Loose flowing bass with a precise and calculated drum attack . . . soul meets science. This is a tune that you can lose yourself in and is rich in sonic pleasure.
“You Didn’t Need” shows Henry Rollins at his lyrical best. It’s as if he stripped the skin from his body, exposing every nerve ending within his being and let the world throw salt on him. The perfect combination of word with expression shows us the emotional torture that this man has been put through, or puts himself through. Sometimes it’s unclear if Rollins’ pain is caused by external factors or things that he brings on himself, but regardless of that, this song reflects the pain greater than any tune prior or since. Musically, the guitars are waves of distorted quasi-metal, the bass is a heavy, driving force, and the drums execute an excellent sense of timing, double bass flurries and cymbal crashes at exactly the right time to add accent. It’s a classic! 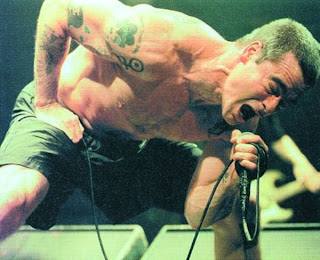 Check out the groove riff from “Almost Real.” Damn it! That’s got balls to it! Guitarist Chris Haskett provides a great feel for the rhythm throughout this tune, gritting out the riff in a tight attack and then holding the notes in a wave of sustained madness as the rhythm section slows things down. The guitar solo over the up tempo rhythms are a treat to the ear, and I’ll always love the change up he provides as the band starts to come out of the funked out jam midway through the tune. This song also shows some unique aspects to the music, including an almost psychedelic musical passage . . . kinda’ like the musical jam portion of Zeppelin’s “Whole Lotta’ Love.” Again, Rollins bares his soul with his vocal diatribe, questioning his own foolishness for trusting the intentions of others. His feel for the music is unprecedented as he expresses his rage, following the groove with a dash of venom and a sprinkle of self loathing and hatred. It’s an incredibly intense tune that will suck you into its maw, chew you up, and vomit your remains in a dingy ally. More please!
“What Do You Do” splits the skull open with its opening bass line run through a distortion pedal of sorts, creating this uber-heavy and vile wall of low end damage. Mid tempo and pounding out the jams, “What Do You Do” is a close up to the frustration that Rollins has with the fragile state of human mentality. Yeah, he’s lumping himself in that group, but he’s showing the weakness of mankind in how they deal with the tough decisions, the decisions that make us stand above our peers. What do you do when your back’s against the wall? Do you roll over and die like all the others? Do face the opposition with steel reserve and fight your way out? Sim Cain does an immaculate job of providing the pummeling beats, holding this sucker steady while adding the occasional flourish of drum fill to show that he’s got chops.
The End of Silence is that album. Yes . . . the one that has the ability to define its listener, so heavy and so real, so passionate and so ugly. Through all of the depression and self hatred, there’s a cautionary tale to the whole thing. Take responsibility for your life, get up and kick life in the tenders, and don’t trust anybody to have your back. Be a machine and learn to feel no pain. It’s a great message when you’re all alone and you’re trying to re-invent yourself, or you’re trying to work through some life crisis. It’s not the greatest message if you’re trying to building a last life with other humans. Personally, I go back to this disc every time the universe decides to fuck with me. You’re gonna’ take away my only source of income and make it that much difficult for me to pay my mortgage? Fine. Give me as second to reach of here for my copy of The End of Silence so I can find the courage to tell the universe where to go . . . and to save me a seat. I’ll be joining you in no time. - Pope JTE

I had the great pleasure of seeing Rollins Band at least half a dozen times during the Lifetime era of 1988/89. One of the most intense live bands, and really LOUD.

I only got to see him a couple of times, but they were performances that will stick with me for the rest of my life.

In fact, the gig that I saw in Tijuana around '90-'91 was brutally intense. Prior to the show, I ate a quesadilla with him and some other chum. I had no idea who he was. I just remember him being a down to earth and cool dude.

This is a great album - heavy, but with great musicianship. This is an incredibly tight band (the bassist and drummer also worked with Greg Ginn's band Gone) capable of many different styles from metal to bluesy jamming and improvisation.

Waverider X! Great to hear from you again!

I totally agree. The musicianship on The End of Silence is so soulful, yet brutally agressive at the same time. I'll have to go back and give Gone a listen. Thanks, as always, for the insight!

How many times back in the day did we listen to that in your truck and drive down Davis Rd?

E - Brother, I have the exact count etched in the bedliner of that rig. At last count, we were looking at 312.

I was just here at work now listening to my ipod - with End Of Silence playing.

It had me so pumped up and thinking once again "fark - this must be one the greatest albums of its type of all time" and so decided to google it -- thats how i found this site.

Mate, your words here are absolutely spot-on. Almost 10 yers on, and this album still sends shivers down my spine. And yes, What Do You Do (Just Like You) are my favs.

I was lucky enough to see the Rollins Band on their End Of Silence tour here in Sydney round 2001 (I think) - they are shows I'm sure I'll never forget!

Jay - thanks for the kind words on the review! This album had a lasting effect on me, and much like you, after I listen to it, I get fired up and want to destroy all that is wrong in the world. The music is so damn real and fileld with rage that if you didn't feel anything, well . . . then you simply must be dead inside.

Hope you find something else within these pages that turns you on as well. Thanks for reading and hope to catch up with you again soon!