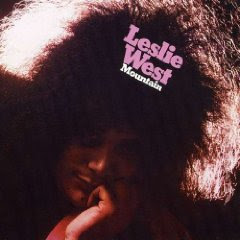 The other day I was playing my 10 month old daughter some Mountain when my old lady walked in and asked “is this new Federale?” Either Mountain was way ahead of their time or Federale were born too late. Probably a little bit of both. This record was released in July, 1969 through CBS subsidiary Windfall, and credited to Leslie West but this is the beginning of the mighty Mountain that we all know and love.

Leslie Weinstein was born on October 22, 1945 and started his musical career in The Vagrants. They were one of many bands that created “the Long Island Sound” in the mid-60’s along with The Rascals and Vanilla Fudge. The Vagrants had a few singles on Atlantic and recorded a version of Otis Redding’s “Respect” that was on its way to being a hit in 1967 until Aretha Franklin came out with her version a few months later and made theirs unnecessary.
Some of the Vagrants material was produced by Felix Pappalardi, who also produced most of Cream’s records. Inspired by Hendrix and Cream, Leslie created this as a solo album with Felix producing and playing bass and occasional keyboards. N.D. Smart plays the drums.
“Blood of the Sun” kicks off the album and the first thing that hits you is the sound. It’s heavy. It’s loud. It’s fat. It’s MOUNTAIN! This is power trio rock at its finest, heavier than Cream and more organized than Blue Cheer. It’s got a groovy acid rock beat to it and Leslie is screaming his enormous ass off. This sets the tone for the entire record and demands that you turn up the stereo. 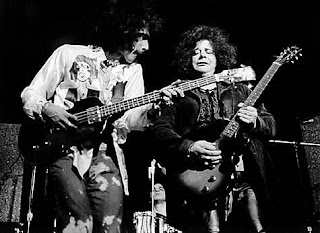 The next song is “Long Red.” You’re expecting another screamer after that opening but this tune isn’t as heavy, featuring some acoustic guitar and roller rink organ under his fiery electric playing. The groove is great. The live version of it from The Road Goes Ever On is a sampler’s delight. It’s been used on songs by Public Enemy, EPMD, Jay Z and Kanye West. Trust me, you’ve heard it. “Better Watch Out” is up next and has a similar feel.
Then it’s blues time! “Blind Man” is heavy 60’s blues rock at its finest. The bass is so distorted and the guitar tone is killer. Leslie West has long been admired for his incredible tone. Everyone from Pete Townshend, Michael Schenker, Randy Rhoads and Clutch have paid tribute to his mighty sound. He used a Gibson Les Paul Junior with a single p-90 pickup in the bridge position and Sunn amps. Rumor has it that Felix would plug him into some ridiculous 600 watt Sunn PA head. Leslie uses the volume and tone controls on his guitar extensively and can get a wide variety of sounds from a one pick up guitar. His vibrato (shaking the strings to create a fluctuation in pitch) is a key part to his sound and makes it impossible to imitate him. B.B. King is the all time master of this technique, but Leslie West and Paul Kossoff are 2 of the best to do it in the rock field.
Anyways, back to the album. “Baby I’m Down” is another heavy blues rocker followed by one of my favorite songs “Dreams of Milk and Honey” which features a killer bass line and Leslie weaving in two different guitar lines around it.
“Story Teller Man” and “Look To The Wind” have a strong Cream feel to them but add some organ and mellotron for a little extra texture. Leslie had no problem with the Cream comparisons but Felix always wanted to avoid it. That’s why later when the band Mountain became official he insisted on adding keyboard player Steve Knight. Leslie has gone on record many times he was against it. 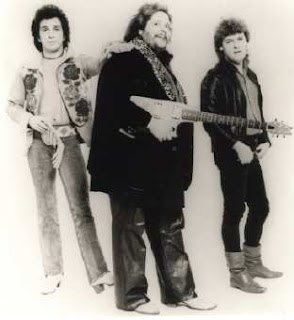 The 2 heaviest songs on the record are “This Wheel’s On Fire” and “Southbound Train.” I had no idea “This Wheel’s On Fire” was a Dylan song until I checked the credits. It sounds like something right off the first Blue Cheer album. “Southbound Train” is by far my favorite song on the whole record. It’s just a killer uptempo blues boogie with great vocals from Leslie. The album finishes up with the acoustic ballad “Because You Are My Friend.”
Not long after the release of this record Leslie and Felix changed the name of the band to Mountain and played one of their first gigs at Woodstock! The only thing that could make this record even better is if Corky Laing played drums on it. If you’ve never seen him play you’re missing a rare treat. He’s a great drummer and an excellent showman. These days Mountain tour from time to time with Richie Scarlett on bass (Felix was murdered by his wife in 1983) and several of these songs are in the set. Leslie unfortunately retired his vintage Gibson Les Paul Junior and Flying V and has been seen using ugly Dean and Steinberger guitars, but hey – the tone is in the hands.
Today’s so called “stoner rock” scene owes a huge debt to Mountain whether they know it or not. The Mountain sound is incredibly heavy, but very different from the way Black Sabbath defined heavy. If you’re new to Mountain, this is a great place to start so pick this up while it’s still in print. And make sure to get Mountain – Climbing and Nantucket Sleighride, too if you don’t already have them.
--Woody
Buy here: Mountain

I like Mountain, I do. But they always seem to be the kind of band you consider more as a holding place for anything else. Perhaps I'm just trying to be nice and not say that they were limited, but that's what it is I guess.

Mountain was not necessarily a one trick pony, though. I love the heavy heavy, but they also were capable of writing some very melodic stuff that I think is overlooked.

For further listening, check out The Leslie West Band (1975).

For further listening, check out The Leslie West Band (1975).

I can see why "The Mad Hatter" is called that! A band considered a holding place for anything else? What kind of semi psycho intellectual babble was that? Maybe I'm just being nice
and saying YOU'RE "LIMITED"! lol And what have you done for the music world lately? But I guess I'm trying
to be nice,cause everybody likes something different!! Rock on.....

Leslie used a Sunn Studio P.A. which averaged at around 75 watts. he's used a bunch in tandem to get that huge sound.