Prong - Power of the Damn MiXXXer 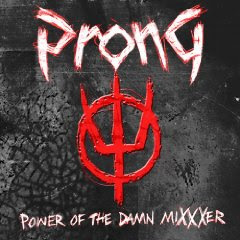 Nine out of ten times when someone tells me that there’s a remix album on its way I run the opposite direction as fast as humanly possible. You see, I generally associate the word remix with the music found in dance clubs or the stuff of a self absorbed DJ looking to imprint his own sound into an existing piece of art. Most of the time, the remixed musical release doesn’t really offer any new dimension to the original version, so really . . . why bother? But then comes along Field General Tommy Victor and a tactical strike force of producers and sound assassins with a remix of 2007’s critically acclaimed Power of the Damager album. My curiosity was peaked and I was prepared to run headlong into the fray, completely oblivious to the incendiary propellants that were headed in my immediate direction. Frankly, Power of the Damn MiXXXer shouldn’t be viewed as a new stand alone album as much as a companion disc to the original Damager. Some fresh ideas, some new takes, and at times, a completely different feel from the original. Yeah . . . this is something that I can get behind.
Right out of the gate, Damn MiXXXer grabs the attention with “Worst of It” remixed by Jon Clayton of Pitchshifter. Heavy, foreboding, and brimming with scalding amounts of tension, this tune is a great transition from the original mix of Damager to this more industrial metal sound. As the bass rambled and rumbled out of the speakers, I voiced a quiet prayer that they hold together for just another hour. My prayers must have been answered because the speakers made it through the entire album, though what they have left in them is still in question. My point? Make sure your sound system can withstand an onslaught of low end for maximum listening pleasure. As the tune grooves through four plus minutes of industrial tinged devastation, I noticed that this interpretation was working my abs into shape. Involuntarily swaying with the rhythm, my abs began protesting against this additional morning workout. Definitely heavy, unquestionably moving, “Worst of It” immediately made me rethink my earlier position on the whole remix thing . . . bring on more of the Damn MiXXXer!
As we make our way through this musical side street, take note how the various producers come in and throw in additional beats in a measure, and with the turn of a studio knob, add textures that create an almost different mood entirely. “Looking for Them,” tackled by Virus from the band Dope, has less of a club vibe than most of the other tracks, but the effects that he pumped into this are frickin’ awesome. The guitars come in beefy and playing a more staccato riff than on the original, played over a haunting synth melody, which gives the tune a completely new vibe. The way Virus managed to create such dynamics through this tune is amazing! The vocals layer upon themselves, the music suddenly stops, then everything explodes into a brilliant ball of sound. “Looking for Them” is one of the highlights on this disc. Is it better than the original? Man, y’all gotta’ be the judge on that. I’m just reporting on what I’m hearing and it’s like I’ve been beamed between the Enterprise and Malcor III on an empty stomach. My mind is spinning through this entire experience as my world has been absolutely rocked. 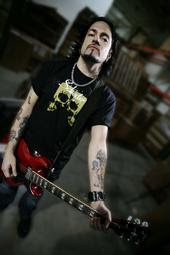 Power of the Damn MiXXXer features two interpretations for “The Banishment,” arguably the most intense song that Prong has recorded since “Broken Peace,” and both versions are brutal renditions. Brutal in a good way, folks. The first remixed by Rob Caggiano of Anthrax, barrels out of the speakers with a sound that reminds me of stepping foot in a dance club. Actually, when I hear this mix I get this weird mental image of the movie Xanadu with Olivia Newton-John and Gene Kelly. I start to picture these two characters on roller skates, clapping their hands, snapping their fingers, all smiles and happy until they round the final turn and Tommy’s guitars coming crashing in. That’s when I picture the rival teams of the original Rollerball flick crashing into each other like a wave of bloodied humanity! The tune goes from a straight up 70’s disco vibe to an elbow smash to the bridge of the nose, and then back again. Tommy’s vocals come across a little more clear in this mix and the lyrics weigh heavier than on the Damager mix. High marks here. As for the second version on this collection, it’s provided by Clayton Worbeck of Revolting Cocks and that original dark intensity returns, and may actually be heavier than the original. The tempo on this one is more grinding as the bass pulses in the background of Tommy’s devastating guitar riffage. The dips, weaves, dives, and musical turns that are provided on this mix boggle the mind. How these guys think of tweaking the sound so dramatically is beyond me and deserving of a tip of the hat. These guys are truly artists in their own right.
I’m not going to say I’m a convert to the whole remix album thing, but I certainly will never simply dismiss the format again. The renditions of these songs definitely add a new layer of dimension to the music. The heavy metal intensity is still there and the overall message of the music shines clear, but what’s been added is a new groove, a rhythm that creates a different element to the overall sound, and an accessibility that could lead to hip shaking acceptance from the masses on the dance floor. Also, I found that I had a different attitude while I had the music bursting from my car speakers. The sound practically enveloped me and had me becoming one with the groove. My foot steadily increased its pressure on the gas pedal, I leaned back a bit more suave than usual, and I damn near had a cockiness to the way I weaved in and out of the morning traffic. Listening to Power of the Damn MiXXXer could lead to problems with fellow commuters, but frankly . . . I don’t give a shit. I’ve got the Power . . . Power of the Damager. Er, Damn MiXXXer. Ah . . . whatever. I have both! - Pope JTE

I love Prong. Have since about 1990. I have this and need to get a review done soon.