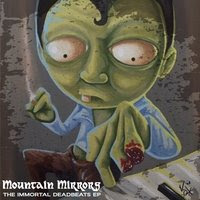 Somewhere deep in the fog enshrouded mountains of Massachusetts, there is a dilapidated cabin that stands like an aged sentry who has watched over the surrounding area for a hundred years. When the ancient hunk of oak that acts as a front door is pulled open, the stench of mildew, mold, and dust waft into the air to join the spores of airborne madness that call this shattered husk home. We’ve seen this cabin before. A couple of years ago, in fact. It was our beacon through the fog on one particularly windswept night as we listened to the haunting sounds of the self titled Mountain Mirrors CD. Little did we know then that this is the home of the sounds, the haven of the creative genius, the warren for the mad creations of music. Within this dank cabin, there is a man. Huddled over a table, a pencil in one hand, a guitar propped against his leg, his skull surgically opened to reveal the inner workings of creative genius or psychotic misanthropy . . . you be the judge. On closer inspection within the fragmented skull, we see an elegant hand scripted note reading, Welcome Guests. Please make yourselves comfortable.

Unnerved yet? You should be, because this whole scenario is basically how I felt when I first played The Immortal Deadbeats EP.
I’ve known Jeff Sanders for awhile and was immediately drawn to his heavy acoustic sounds with that self titled Mountain Mirrors release. But, this isn’t news to those who wander the pages of the Ripple Effect. The follow up, Dreadnaught, took us listeners to a more brilliant and shiny destination yet retained some of those dark elements that drew us to the music in the first place. One might call it natural growth. The Immortal Deadbeats combines the two efforts and then propels us to a land of such psychedelic beauty and psychotic savagery that at times you begin to wonder if you’re listening to the same band. Waveriders, this release is a head trip. And what a glorious trip it is! I highly recommend that you all go out, buy yourselves the best headphones that money can buy, and leave your hallucinogens stored in a safe place. If you try to enhance the listening experience through artificial means, you may not come back as you originally left.
“Owned Again” starts the whole ball rolling by taking us back to some familiar territory. The heavy acoustic guitars ring out in a similar fashion as we heard on the last two discs, and then it happens. Subtle at first, but then it becomes more and more prominent that the acoustics are taking a backseat to some incredible synth work. Is it a mellotron? Could be. Is it a Hammond organ? Again . . . could be. Who cares about the gear? Immerse yourself in the sound, the rich tones, the intricate composition and interplay of guitars, bass, drum, keys, and vocals. And the vocals! Expressive, expressive, expressive! The guitar solo, pumped through an electric this time out, features some serious warmth and even a little shred. A lot of the sounds have a classic rock, 70’s hard rock vibe going on, and everything just begins to swirl, get hazy, and ultimately lifts the soul. There is true integrity in this music, and what a rarity that seems to be in rock n’ roll!

Our mad scientist changes pace ever so slightly by kicking off “Ascension Vibes” with a down tempo, almost somber guitar and piano intro. Then, like a cat who decides it’s tired of being in that particular room at that particular time, the song bolts across time and space, and drops us in a strawberry field with a girl named Lucy who happens to have diamonds in her eyes. Heavy on the keys throughout and just compelling as all get out, the tones are amazing and create otherworldly textures. The best part of the tune comes with the off time break near the midpoint. This is as proggy and virtuosic as it gets, folks. Bassist, keyboardist, producer extraordinaire, Per Ulfheilm came on board for this project and has added such an incredible flair and textural flavor to the legacy of Mountain Mirrors. There’s so much going on in this music that you can’t help feel like you’re being taken on journey of someone’s demented dreams.
Borrowing from the acoustic guitar riff factory of Days of the New, “Immortal Deadbeats” kicks out a hefty groove while Sanders lays down some haunting vocals conveyed with some great nuance. For the first time, it sounds like Jeff is completely at ease with handling the vocal duties. As mentioned earlier, they’ve become more expressive, they have a greater depth, and there’s a passion to the performance that feels like he’s just cutting loose. Again, Ulfheilm’s keyboard work is spectacular, especially over the bass breakdown towards the end of the song. Great melodies and tones bounce around the eardrums, and by the end of the tune, I feel like I’m experiencing something akin to elation. This is definitely the heaviest tune on the disc, but don’t confuse it with straight up metal. The weight of the tones and the musical undertaking is where the heaviness comes from.
Finally, “Wash Me Away” puts a cap on the whole trip. Featuring the most jarring transitions and most obscure musical influences, this song takes more than one listen to grasp the depth of the whole thing. Distorted and bluesy at one moment, stripped down to a beat, a cello, and bluesy vocals the next moment, riddled with polyrhythmic love provided by the wonderfully talented Magnus “Trummange” Brandell, and then add an odd rattle and a xylophone to complete the madness. The tune goes from somewhat creepy to almost hopeful to completely horrifying in the matter of minutes. The composition of this track will make your head spin and then lift you with its expressiveness and multi-layers of texture.
Four songs long, but these aren’t merely four songs. These are four individual journeys in the deepest, darkest, most foreboding catacombs of a man’s mind. Then again, these aren’t simply journeys into the mind of a mad scientist as they are reflections of a mad world that he lives in. Mountain Mirrors has become a brand that I can trust. With each new release, I’ve heard quantum leaps in musical growth, both in execution as in composition. If you’re a fan of Porcupine Tree’s more out there work, then The Immortal Deadbeats is going to sit like a mint on your pillow in your hotel room. - Pope JTE
buy here: The Immortal Deadbeats EP