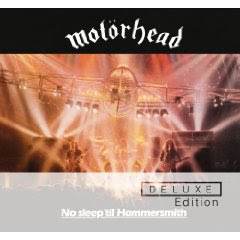 Music’s biggest middle finger is now double fisted and right in your grill. That’s right, the 2CD deluxe version of Motorhead’s No Sleep Til Hammersmith has FINALLY been released in America. This thing came out a few years ago in Europe but was impossible to find anywhere in the US at a reasonable price. All the deluxe reissues of Motorhead’s “golden era” (Overkill, Bomber, Ace of Spades, Iron Fist, Another Perfect Day) are essential purchases, but if you can only afford one, this is the one to get. Why? Because IT RULES! Ask any Motorhead fan to pick their favorite album and this is usually it. It’s faster, ruder, dirtier and LOUDER than any of their other records.


I remember reading a review in Creem magazine when this first came out in 1981. It said something to the effect that when Lemmy says “thank you” in between songs it’s kinda like when a mass murderer says “I’m sorry” after blasting innocent bystanders with a machine gun. I don’t even think I finished reading the rest of it before I was on my Schwinn 10-speed bike in search of this thing. Recorded on the notorious “Ace Up Your Sleeve” ‘81 tour (with Girlschool as support), Motorhead’s popularity in the UK had reached a peak. No Sleep Til Hammersmith entered the British charts at #1. And the band was famously against the release of this thing! I don’t know what they were thinking because this is by far the best live document of Motorhead, no matter what era. Oh yeah, none of the songs were actually recorded at London’s Hammersmith Odeon, but in Leeds and Newcastle in March 1981.


If you’ve never heard this record I feel sorry for you. But I also envy you because you’re about to get your brains turned to oatmeal. Kicking off with “Ace of Spades” (a song they usually put at the end of the set now) you can hear the unruly mob lose their shit. You can practically smell the beer and body odor of the crowd and the band. Anytime I think I’m tired of this song, hearing the live version reminds me that I’m not and it’s time to turn up the volume. “Stay Clean” is next. Is there any other band that always features the same song 2nd in their set list? This has always been one of my favorites and it would be weird for them to put it anywhere else in the set list. The tempo dips just a hair for the awesome “Metropolis.” At some point in the early 80’s they re-released the film Metropolis in theaters. I went to go see it because of this song. The movie’s cool, but the song is way better. Believe me “The Hammer” is gonna bring you down! This violent musical outburst always makes me want to hurt people, preferably with a hammer. 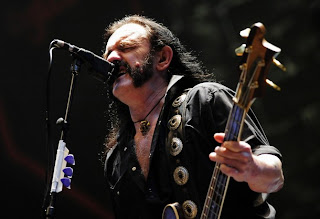 They played “Iron Horse” on the 1981 tour but weren’t happy with the results so they used a version from the 1980 tour. That’s the only song from a different era. Back in the vinyl days “No Class” finished off side one in complete raucous fashion. These days, Motorhead ends their show with “Overkill” but back then it was in the middle of the set. The studio version is great, but the live version is a headbangers delight. Phil Taylor’s double bass drumming is totally pummeling. Fast Eddie’s guitar tone is rude and Lemmy’s bass gives posers an instant headache. This song could go on for half an hour and it still wouldn’t be enough.

Only a band that featured a former roadie (Lemmy worked for Jimi Hendrix and The Nice) could write a song called “(We Are) The Road Crew.” True tales from the road are shouted over a descending blues riff and everyone lifts their beer can to shout along on the chorus. Anyone who’s ever moved an amplifier loves this song. “Capricorn” is the slow one “so’s you can get mellowed out” says Lemmy. This is the closest Motorhead ever gets to Hawkwind territory as Lemmy testifies to the powers of his astrological sign. This song gives you a breather before the double whammy of “Bomber” and “Motorhead” force your brains through your nose. 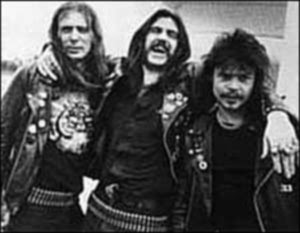 That’s the main course. Here’s what you get for desert on this muther. “Over The Top” was the b-side on the live “Motorhead” single from No Sleep. This has been on most of the CD reissues. There’s nothing you can say about “Over the Top” except that it’s over the top. A frenzied Nugent style boogie blast that makes you want to throw chairs against the wall. Disc 1 wraps up with SIX bonus tracks recorded at the same shows but not on the original album – “Shoot You In the Back,” “Jailbait,” “Leaving Here,” “Fire Fire,” “Too Late Too Late” and “Bite The Bullet/The Chase Is Better Than the Catch.” If you’re a Motorhead fan just reading those song titles should make you wet your pants if you haven’t already from drinking too much Carlsberg Special Brew. (Fast Eddie says Special Brew helped take the edge off all the speed they were taking. I still order it whenever I can find it).


Disc 2 is basically all the songs on the original album from other shows on the tour. Are the duplicates an improvement on the master takes – not at all. Is it really necessary – HELL YES! It’s Motorhead on the 1981 tour! And it kicks fucking ass!!! The only song that’s missing is their version of “Train Kept A Rollin” that was on a 7” flexidisc given away with Flexipop Magazine in 1981. I have a couple of copies of it, but it would have been nice to finally have it on CD with all these other gems.

This 2CD version of No Sleep Til Hammersmith is the 5th time I’ve bought this damn thing. First was the US LP. Then I had to buy the UK pressing because it had the inner sleeve photos in color and the US one was in black and white. I bought it on CD as soon as it came out. Then bought it again on CD when it was reissued with The Golden Years EP on it. Now this, but I don’t care. I’ll buy it again if it comes out with something else on it. So should you. Don’t download it or burn a copy from your friend. Don’t play it through crappy little computer speakers. Treat it as the gem that it is and do it right. Play it really fucking loud on your home or car stereo or don’t bother at all.

Buy here: No Sleep 'Til Hammersmith

Hehe... i bought this cd about 20 years ago, one of my first cd and indeed it blows your brain. However I am not going to pay it again...I just hate rereleases/remasters/reissues and everything that companies trying to do to get some extra chip (especialy when they trying to do it with bands that they don't belong to their roster any more)

I love these guys! Its about time they released it here.

the first reissue in 96 (1CD) contained "Train Kept A Rollin'"! why on earth they didn't included this track on this deluxe edition is beyond me!

If ever had to choose one Motorhead album, this is it. 18 friggin classics all in a row. The band is exceptional tight and faster and heavier than the originals.

I have this album and it has all of my favorite songs from Motorhead on one CD which is perfect to listen to while driving.

Wow this has been my Top favorite album of all times. It was not so long after this went out when I first heard it, borrowed from a high school friend that went to UK during summer 1981 and brought it (yes, the inner sleeve color photos version)to Mexico, where rock (long before talking metal) was kind of banned or under-rated by the media, so nobody, and I mean NOBODY knew about Motörhead.
Judas Priest, Black Sabbath and early Iron Maiden, etc. were the titans of heavy rock in (our) underground, so I became fan instantly, and begin my humble collection. I had to buy the US version (in US) since the UK one was like impossible to get. Then the CD with Golden years, the recent picture disc vynil and lately this 2CD version...never thought that MH would last this long and happy that Lemmy is now a heavy metal/rock'n'roll icon. Long Live Lemmy.