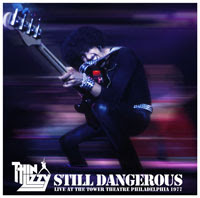 Are you ready to hit the floor?

Everyone knows that Thin Lizzy’s Live and Dangerous is one of the greatest live albums of all time, even if there are tons of overdubs. Who cares when the end result rocks so hard? Besides, there are plenty of Thin Lizzy bootlegs out there showing what a kick ass band they were. Everyone involved in this CD is going out of their way to say NO OVERDUBS.

Here to set the record straight for all the non-believers is this new live album from Thin Lizzy’s 1977 tour. This show was originally recorded and broadcast for the King Biscuit Flower Hour radio show and captures the band at their absolute peak. Brian Robertson was back in the band after being exiled for bad behavior. Some of these tracks were supposedly used for Live and Dangerous but I doubt we’ll ever get the real story. Anyway, this record kicks ass. If you’re a fan you need to get this. Sure, 7 of the 10 songs are duplicated from L&D but this is Thin Lizzy, not the Grateful Dead.

The show kicks off with “Soldier of Fortune” (one of the songs not on L&D) and the band sounds great on this gem. Phil’s in great voice, the twin guitars of Brian Robertson and Scott Gorham shine and the rhythm section of Phil and Brian Downey is in the pocket. I’m surprised the band used this as a set opener since it’s not a total barn burner but a slower paced song, but it sets up the next one perfectly – “Jailbreak.” You can really hear the crowd come alive when they kick into it. 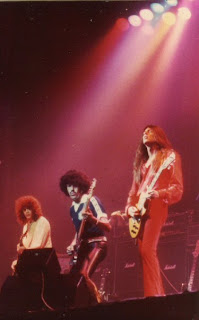 “Cowboy Song,” “Boys Are Back In Town,” “Dancing in the Moonlight” and “Massacre” follow and are very similar to the live versions that we all know and love.

“Opium Trail” is the highlight of the record for me. It’s a favorite from the Bad Reputation album and I don’t have any other live versions of it. “Don’t Believe a Word” is up next and follows the L&D template. Phil gets the crowd singing along loud and proud on “Baby Drives Me Crazy” and the disc finishes off with “Me and the Boys.” This song was never on any of the studio albums and was only available as a b-side. Great boogie tune with lots of guitar solos traded back and forth between Scott and Robbo.

Overall this is a great release. The sound is fantastic. It was mixed by legendary engineer Glyn Johns (The Who, Led Zeppelin, Rolling Stones, etc) with Scott Gorham and really makes you feel like you’re at the show. However, it is a little frustrating knowing that this is not the complete show. Semi-official versions of this show have been floating around for years with 6 more songs (for the record, the missing songs are “Johnny,” “Warriors,” “Still In Love With You,” “Emerald,” “Bad Reputation,” and “Are You Ready”). You can hear that version at Wolfgang’s Vault.