A Sunday Conversation with Hypno5e

Camped out on the red leather couch, the members of Hypno5e sit, enveloped in an aura of flashing film clips and surreal ambient noise. Join us as the band works to distance themselves from the rest of the music world, their creation of a sight and sound relationship, and the burgeoning music scene in France.

Hypno5e is truly a unique band. You incorporate numerous elements from various metal genres to create your sound, but maybe just as important is that you utilize a vast amount of visual aid as well. How did this visual creative medium come about?

Emmanuel Jessua (vocals, guitar, piano, programming): According to me picture and sound go together. I discovered music through cinema, music generates images, a music note suggests an emotion becoming a picture in your head. The visual aspect is thus taking part in the birth of our music. Furthermore it is underlined by some films’ samples. The big picture has always been very appealing to me, as well as pictures in a broader sense, having video in our project is thus logical.

I’m in charge of the video: I use my own archives plus some movies’ extracts which I warp my own way, just like music samples. A bit like Godard did in “Histoire du cinema”. I’ve been working on it for a long time, it is one of the basis of this project, the second album will be built the same way. We try to make a movie that generates your own interpretation of it, music notes are turned into graphic concepts, thanks to colour changing and effects, so the result is more than just music. 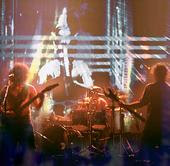 France is not usually on the tip of everyone’s mind when talking about metal, but Hypno5e are in the midst of one the more exciting movements in metal that I’ve heard or seen in a long time. The metal that’s coming out of France is more experimental than anything else around, and on top of that, the density of the sound can be overwhelming. Do you recognize that you’re part of metal movement of sorts? Has the French underground always been so brutally heavy?

Emmanuel: We don’t really consider ourselves as members of any kind of music, and even less of any Metal movement. We don’t want to be closed in a single music style, because we all have different musical “horizons”. Our goal is not to fusion all those style we love, but to create a real hybrid style that doesn’t obey any code. We follow no school, no academy.


Is there an underlying social/political situation in France that causes bands, such as you, to create such monstrous music? Or, is it more of a process to just create more and more intense music than your peers?

This French Renaissance of metal isn’t limited to one region of the country, for instance, Gojira is from Bayonne, Hacride is from Poitiers, Psykup and End. are from Toulouse, and Hypno5e are from Montpellier. Though stylistically different, it seems that each band still carries that incredible amount of low end in their music, as well as no fear attitude towards pushing the creative envelope. With such a wide spread amount of territory, what do you feel brings each band together so similarly?

Gredin (bass): There is one rule: swipe the table before creating, just keep the best from the past but don’t copy it. French metal is globally underground. Kids don’t have many opportunities to listen to that kind of music on the radio, so I guess everyone does it their own way.

Loudblast were a mid ‘80’s thrash / death metal band from France, were Hypno5e in any way inspired or influenced by their music?

Emmanuel : I am sorry to tell you that I’ve never been listening to Loudblast, so we can’t really be influenced I don’t listen much Metal music as I told you, we try as much as we can to be free of any influences.

Gredin: yeah, and as I told you metal in France has never been much broadcasted.

Emmanuel: I listen to classical and experimental music for the most. Gredin is keen on Xenakis and Reich, the others listen to more electronic music. So we don’t listen to that much metal or rock. These kinds of music rarely please us.

I know of a mere handful of bands that are a part of the French metal scene, and I’ve named most of them. Who else is out there making waves and creating this fascinating style of music?

Emmanuel: We don’t listen to much metal, but we enjoy Gojira and Psykup, they make good music and are great people.

As you and most of the Waveriders know, I found your album Des Deux L’une Est L’autre to be a brilliant piece of sonic art that captures the imagination like very few pieces of music can. I’ve also heard that there is a follow up album in the works. How do you produce an album better than perfection? In other words, how do you follow up such an amazing and groundbreaking album without coming up short? Do you feel any pressure to make this new album better than the last?

Emmanuel: Now, we are recording, and yes, we have a lot of pressure to make this new album. For our first album, we’ve waited something like 3 years before recording, and we recorded the album 3 times, because we always wanted to do better than it was. I can’t really explain how we compose our music. It’s a very abstract process. Usually, we like to exile to a no man’s land, and stay there for weeks, trying to release a very interior music. 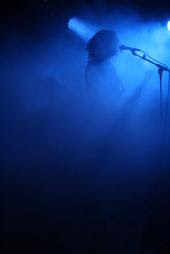 Emmanuel: We want our project to be totally artistic, including music, video, and visuals. So, the visual aspect is within the music when we create it. After the composition, when we are to perform on tour, we create a film that is going to be projected during the shows. Our first tour was with an experimental film that I’ve made, mostly based on rhythm and contrast with the music. For our next album’s tour, the movie will be more present, we are now working on a new movie that will be a real fiction, and this fiction has to be already included in the base of music, that’s why this new album is harder to compose than the first one.

Where do you find your creative energy? Do you simply sit down, hammer out a riff and then figure out ways to make it more dynamic, or is it more of an organic process?

Emmanuel: As I told, composing is more of an organic process. We want our music to translate and to be the expression of a backward glance on ourselves or on our imagination. It can also be related to images we see or imagine. Because I’ve travelled a lot, my imagination is always refilled by new sensations, pictures or emotions, and I try to translate this travelling effect of transforming images of reality to mental images in our music, I think that’s why our music is nostalgic and very broken. I don’t know if I am very clear, sorry.

When we make our way out to Montpellier, where would you recommend we stop to find the best underground or best selection of music (stores and clubs)?

Gredin: I own a bar called “Le Méchantes bêtes” ( http://lemechantesbetes.over-blog.com/ ) where we only play experimental and noise music, international bands come here and play sounds never heard before, I haven’t had the occasion to see a place like this in the States, you should come and hear what’s new! The only American artist I’ve received is Mary-Clare Brtzwa from NYC.

Emmanuel: If it’s still alive, just go the Rockstore, and to the Secret Place, those are great clubs!
Thanks for taking the time to rap with us! Best of luck on the remaining dates of your U.S. tour! Hopefully, we'll catch you on the next trip through!
Des Deux L'une Est L'aurte experimental free podcast French metal Hypno5e Hypnose interview The ripple Effect visual music