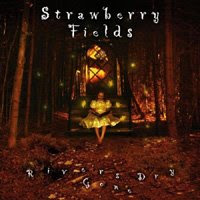 Somewhere, from the depths of Wojteck Szadowski's mind came the fascinating hybrid mix of sounds and styles that is Strawberry Fields. Their debut album, Rivers Gone Dry, challenges and delights all along, proving the that there is little that cannot be combined and twisted and mixed together in today’s musical world.

It is the echoing opening notes of “Your Story”, Robin’s voice comes in, deep from the valley of Enya (edited out of the final cut of Lord of the Rings), but then Sarhan starts to layer the sounds: the light twang of the harp is joined by the rhythmic loops and samples, even the thin measured sounds of the electric guitar and the clipped high hat, until the guitar squeals impatiently before the whole band comes on for the chorus. “Fool” follows the same pattern, with Robin’s quiet vocals before the band drops the hammer, and, sadly, the only clunker of a track on the album. But for a guitar overlay that whines along with the chorus, the rest of the track is a gem: some creative mixing and a great solo reside here.

The title track builds us in with a drum pattern that reminds me of “When the Levee Breaks” ala Led Zeppelin, once we’re in the song, we’ve entered the territory long since ceded by the Eurythmics, when Annie Lennox stared us down from "Sweet Dreams" in that suit and the entire world was intimated by her. Frail, all but sane/going deep within/you’re standing here beside/yet still to far to see The chorus has a haunting refrain of Rivers gone dry, the layers of keyboards reiterating the main theme, softening the menace of the Bonham drums. “Open Your Eyes” comes from the same territory, mixing Eurythmics and Enya with an unusual melody that veers from the rock and roll chorus, back to the echoing textural Hendrix style guitar in the distance, and into an Ace Frehley solo. It shouldn’t work at all, honestly, but it does, and its one of the best tracks on the album. High marks also the solo on “Maybe” as well. Excellent technical work, and well produced. 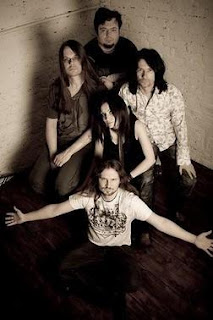 “Close” and “Beautiful” both start in menacing Massive Attack territory, the electronic percussive back rhythm, the keyboard swell, yet Robin’s vocal melody is light and reassuring, and when the Naked Eyes keyboards join in, we’re lifted out of the dark until the chorus sends us home: an army of Robins singing (on “Close”) If I had a minute of my life to go/I would hold you close/If I had a moment of my life to go/i’d rely on the minute and I’m ready for fall. Similarly, “Beautiful” can’t bear not the reassure us on the melody, even when the lyrics tell a different story: one move you make/may turn down your life/in the way you did not expect.

“Moon” takes us way out to a jazzy Portishead break by way of the semi-legendary Austin TX band 9 1/2 Souvenirs. The drummer skittles his way through the light little tune while Sarhan shows us his best semi-hollowbody guitar chops on the solo.

The quiet, sentimental album closer, “Flow”, is a classic side two closer from those of us from the vinyl age, where are we going/who do we follow/ I hope we’ll find out better tomorrow sings Robin, and while the song builds to one final crescendo, what it wants to do is send us out of the concert hall with our lighters in hand, both entertained and uplifted at the same time. The guitar break is almost, given the jazzy influence on “Moon”, slightly Jeff Beck a la Blow by Blow. Again, it may sound like an oddity, but it all works when you simply listen to the music.

You finish up here, I’m working on seeing if there are any cheap flights to Warsaw.