March 09, 2009
Hardcore punk is in the air, and here at the Ripple we're tuned in, turned on, and moshing with flying fist and elbows. Here's three recent discs that passed through the Ripple player. 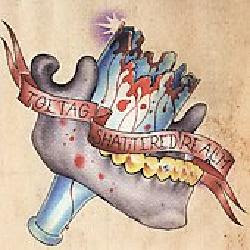 A double dose of fucking ugly, mega-brutal hardcore/death metal hybrid vomitus from Eulogy Records, fine purveyors of music of that kind. Toe Tag and Shattered Realm team up with three songs apiece to blast the fillings out of your teeth with a mondo barrage of hate-filled, violent hardcore noise. Trust me, this is music to melt your mother's hairdo.

Both bands do an admirable job of venting their spleens in offering to their own personal devils. In truth, 3 out of 4 dentists would be hard-pressed to be able to tell the difference between them, both possessing guttural vocals, blasting guitars and flailing drums. But, of the two, I've got to tip my referee's hat to Toe Tag who positively obliterate anything within hearing distance with their three tracks. The boys know how to play with dynamics, slowing down the tempo to bring out the eyeball jellifying riffs. And on a personal level, I like their "singer" better, he gets more liver into his vocals. "Only Yourself to Blame," starts at speed metal velocity, but quickly drops down into a monstrous riff. "Kill or Be Killed," positively tears it up and "The Bottle" is epic in their own brain-mushed kinda way.

But that doesn't mean Shattered Realm are slackers. "Hate for the World," brings in enough time changes to keep it interesting and "Fight to Win," is possessed by a fucking brutal riff. Their one experiment away from traditional sound, "Bring the Violence," brings on a mixed result with spoken, near rapped lyrics, but you gotta respect em for trying.

If sonic blasts fierce enough to register on the Richter scale combined with grown men screaming words of bile with their internal organs in their throats is you kind of thing, you'll find plenty to like here. And the whole shebang is available from Eulogy Recordings for only $5, so what are you waiting for? Destroy! 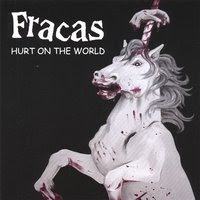 Fracas - Hurt on the World

Another day, another hardcore band. Amongst this deluge, after a while, they can all sorta begin to sound the same. So, the only question that matters is-- is there anything to the music?

Lyrically, that answer is still floating in the wind. Don't go looking here for some great insights into society or the state of the nation or, well, anything. This is pissed off hardcore for no good apparent reason. Or as the boys tell it themselves, "I'm a bitter man/I know it's sad but true." No, rather than insights here you'll find songs about vomiting in the toilet ("Porcelain God"), how neat and truly hardcore they are ("Stitched and Stapled") and how the younger bands are making them feel old ("Times").

Then just when I was about to chock it up as another assault of juvenile, snotty pap, a strange thing happened. I began to like it. Really like it. The entire album rages with a visceral urge that just can't be ignored. If you've got something in your spleen you need to get out, this will do it. Admittedly, not all the songs work, and in fact, it's the songs where they try to make a statement that work the least well. "We Have Control of Your Mind," is just rubbish. "Whip Crack of the Great," and "Hurt the World," follow close behind. But there's no denying the power of the other tracks and when the guys drop into a damn good Motorhead-ized "Burning Trash," and "How?" I had to fight the urge to drive my car straight to the police station and torch the place. With real melodies and strong riffs, my guess is that this represents a maturation of songwriting as the guys are turning into the older turks on the scene. I'm still undecided on their cover versions of CCR's "Born on the Bayou," and Iggy's "Now I Want to Be Your Dog," but the CCR one has grown on me and I give em props for trying something new.

In the end, "Hurt On the World," is a keeper, a strong set of hardcore with a few damning hiccups. But if "How?" represents what these guys are capable of as they mature, I can't wait until they are Viagra-aged geezers. They should be pretty fricking fantastic by then. 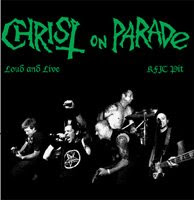 Christ on Parade - Loud and Live

Recorded live on their 2007 West Coast tour at the pit at KFJC radio in , "Live and Loud," finds the punk hardcore cretins in fine form blasting through a ferocious set of their most classic tracks. Blasting off with "Chaos Breeder," the pit is instantly a pummeling zone of flailing humanity. Scathing, acrimonious and unforgiving hardcore noise is the what the boys are about and to that end they deliver in spades. Each song pulverizes at near warp speed, full of buzzsaw guitars and drums so sloppy you'll be certain they actually spilled out onto the mosh pit.

In the Fracas review I mentioned that the music was good, but the boys had nothing worthwhile to say. Not the problem here. Christ on Parade are pissed off and not afraid to let the world know about it. From raging slabs of anger like "Self-Serving," "Thoughts of War," and "Final Solution," all the way to the closer, "Everyone's Crazy," this is a violent belching of boisterous bile, seething with anger, spit and sweat. If there's one draw back, it's the relative similarity of the songs. With almost each one blasting off at the same bullet speed, the songs all blend together, only distinguishable one from the next when the singer takes a moment between tracks to burp into the microphone. While that may work great for getting the audience to dismember each other in the pit, as a listen it can nearly induce brain damage. At times the boys try to break things up with an out of tune guitar solo, a bass breakdown, a great riff like "Riding the Flatlands," or an actual epic song, like the four minute long "Crazy," but too many of the songs suffer from a lack of dynamic. Still, this was a disc made in the pit, for the pit, and to that end, feel free to pound until you bleed.

My only word of warning: not a great disc to listen to while you're driving. You'll hate everyone on the road.