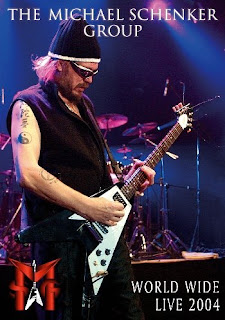 Metal Mind Productions presents a special ltd. swing-case edition of Michel Schenker Group’s first DVD. This German hard rock/heavy metal guitar legend, and long-time Ripple Favorite, was a founding member of Scorpions, and achieved fame as a member of UFO in the middle of the 1970s. Schenker has had a long career that has seen him rise to become one of the most influential and respected rock guitarists of today, producing several classic albums along the way.

“World Wide Live 2004” DVD features a recording of MSG supreme performance at the Metalmania Festival 2004. The new edition includes an additional CD with audio tracks recorded at the show. Track list consists of the highlights of all stages of Schenker's career: from UFO hits, through MSG classic tracks, to his solo compositions!