Little Man - Of Mind and Matter 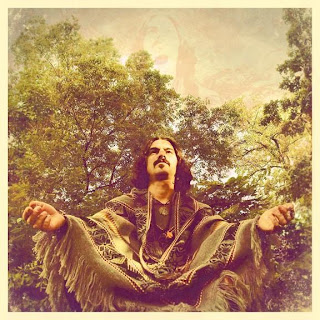 Plenty of bands try to summon the ghosts of the past, vintage microphones, vintage production, digitized pops and crackles to simulate vinyl, but rarely do they manage to channel the essence of the era. Little Man, out of the Twin Cities, captures the feel and production, and, most importantly, the songwriting of a bygone time on their newest album Of Mind and Matter.

“Tarots and Arrows” opens with a retro bang; the clipped T-Rex guitar work by Chris Perricelli, deliciously phased vocals and Dave Cottini’s Keith Moon-eque drum fills nail the era in two minutes and one whole second with nary a bit on vinyl nearby. “Together On The Long Way Around” covers the same ground, mellow keyboards taking the edge off of the guitar, but doing as great a job of channeling Ray Davies as should be legal. With no less authenticity is “Don’t Pray To Fantasy”, as if Ziggy hadn’t burned up on re-entry when he fell back to Earth. The lazy guitar solo and languid beat match the harmonized vocals in a perfect mix.

The songwriting is one of the strongest parts of album, neither sounding too modern nor weak in any one part, as if they had a great Bolan hook but didn’t know where to go with. Lenny Kravitz has for the last couple cds given up writing lyrics and instead simply put together two catchy choruses and called them songs. Little Man suffers no let down here.

It may be the delicate acoustic guitar that drives the rhythm of “Talisman”, but it is the breathy echo-y vocals (and ch-ch-ahhs at the start) and its lyrical concerns Don’t fight the urge/don’t lead them on/I suffer more/standing in line that make this one move. The delicate solo and falsetto scat singing over a mere 8 bars seals the deal. A quiet drone opens “Everyone on the Floor” before the smart chords and agile drumming swings in, background “ooh-oohs” panned way right, and the Brian Jones rhythm guitar chimes for the chorus and break. Smart, simple, catchy songwriting. 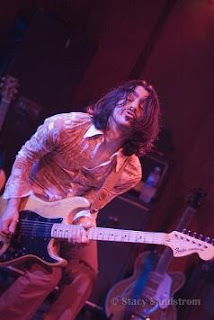 “Did You Know”, “Savers”, and “Get It To Ground” are a trio of mid-tempo numbers that all have wonderful production touches by Ed Tinley (the harmonies on “Ground”, the violin and guitar bridge on “Know”, the steel guitar on “Savers”) although they point out one of my few criticisms of the album. If you’re going to ape the era, there should be enough distance to see the weaknesses of the era as well as the fun stuff. Latter Kinks albums suffer from an over abundance of mid-tempo numbers with somewhat reedy vocals, and grouped to together in the middle of the album, they fail to separate as much as they should. Grouped on my iPod in shuffle, they stand out more. “Savers” in particular channels the relaxed feel of Led Zeppelin III, perhaps a stone’s throw from “Tangarine”.

“Not Quite So High” has the ambient drum sound that so few groups get. Chris is isolated on the right side with his vocals and guitar, and you can imagine the rest of the group leaning into the mike as they come in on the chorus. I doubt that it was recorded live, but it has the feel of a performance as a group, something generally lacking in modern recordings. Coming out of pop-rock heaven to “Love of All Time” we don’t mind kicking the tempo down a notch, blowing on the blues harp, and putting the feet up. The psychedelic waves of T-Rex come to take us away, just a little bit on the choruses. “Lifted Me Like A Curse” takes us even further into hoe-down territory. The would clearly leave the tongue in cheek if they didn’t need it to sing.

If we had any doubts about Little Man sealing the album away, we get “Seal Of Secrecy” which is a great album closer, the electric guitar coming on the chorus, never over whelming the layers of vocals. Chris Perricelli is a great guitarist is the sense that the guitar never overwhelms the songs, but compliments them in all sorts of ways: the full on power chords, the delicate acoustic playing, the subtle fills at the ends of the lyrics. Even on the solos, you never get the sense that he’s showing off but adding to the song. Little Man may not be the easiest to dig up, but the retro fun is well worth the search.