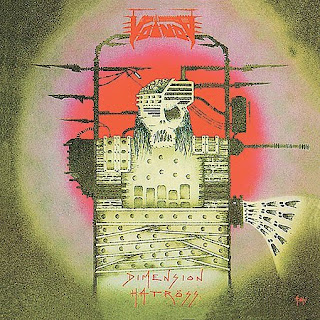 When we last left our hero, the Voivod was surviving nuclear holocaust, technical dissolution, social anarchy, and an all around bad day. Where Killing Technology was a discordant chant of brutality and chaos, Dimension Hatross takes the band’s sound one step closer to realization. Complex time changes and odd chord progressions still rule the day, it’s just that they’re performed with more deliberation, with more technical knowhow and experience. Dimension Hatross was the album where we see Voivod hurtling through the cosmos and entering another dimension of sight and sound. Elaborate and so far ahead of its time, this was the album I bowed to in high school. Where everyone else I knew was passing the collection dish in the church of Metallica, I was up the street and around the corner in a place where a mechanized creature gave sermons that captured the imagination of those in attendance. Ah, the future never looked so bleak and beautiful at one given moment!
Dimension Hatross is an incredible tale of the Voivod character being immersed in a society of totalitarian rule where the citizens are brainwashed and forced to lose all individuality. Hhmmm . . . it doesn’t sound too far from where we’re at with our society now, does it? And this multi-layered story has a soundtrack that goes with it. Musical arrangements filled with tension to the point of bursting, emotions bubbling over, creating a maelstrom of moods, all conflicted with one another. The guitar work on this album is otherworldly. Layer upon layer of effects help Piggy create the cosmos for the Voivod to wander. Snakes vocals add a psychotic tone to the whole tale, lending credence to the mind rape the lead character goes through. The rhythm section of Blacky and Away lay down a low end menace to establish a feeling of dread.
“Experiment” leads off the disc, telling the technical tale of the Voivod smashing atoms and creating a new universe. High energy off time riffs with complex tempo changes set the stage for the entire album, which ultimately leads us to “Tribal Convictions.” The menacing rumble of Blacky and Away builds this beast of a tune and introduces the Voivod to the new dimension. This massive intro gives the tune an epic feel and I’ve often wondered why they didn’t lead the album off with this tune, though in hind sight, I know it wouldn’t convey the story in the same way. It’s an absolutely brilliant tune that questions blind faith and absolute power.
“Chaosmongers” and “Technocratic Manipulators” introduce the warring factions of the new dimension, the Chaosmongers being those opposed to the rules set forth by the ruling government of Technocratic Manipulators. “Chaosmongers” is a high speed thrash fest that features a ton of Piggy’s six string acrobatics while “Technocratic Manipulators” is a flurry of violent time changes that correspond with the angst of the Voivod’s fight against authority. Freaking incredible break at the midway point on this one! 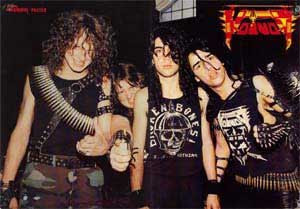 “Macrosolutions to Megaproblems” kicks off the second half of the album as the Chaosmongers revolt against the totalitarian rule. Hostility and war break out. The music is manic, full of sudden stops and starts, rumbling like war machines, bursting explosive fury. This track captures every essence of the band. So, if you ever want to know what these cats were like but didn’t feel like sitting back to listen to their entire catalog, listen to this one to get a snapshot. “Brain Scan” and “Psychic Vacuum” are my two favorite tracks, showing the Voivod being possessed by a psychic entity and breaking control of the mind control that he’s been under. The music is as technically proficient as the band has ever been. The guitars are drenched in delay and chorus effects, which create this amazingly manic and paranoid atmosphere. The off time riffs are electric . . . smell the ozone. Snakes performances on the two tracks capture the paranoia and the drama. The music is so grand and sprawling that I’ve been physically moved to freak out on more than one occasion. And fittingly, these are the tracks that capture the climax of the tale, so it’s no wonder that they’re so epic and vibrant.
The album closes with “Cosmic Drama” and the psychic annihilation of the universe. Opening with an eerie guitar passage and bursting with the cacophony of a world exploding, this song acts as a bridge to the, dare I say, even more advanced opus of Nothingface. Moody and ever so complex, “Cosmic Drama” wraps up the Voivod’s story of being disenchanted with his creation of a new dimension and psychically destroying that which he created. Deep stuff, folks.
After twenty something years of listening to this album, it’s a testimony to the strength of Dimension Hatross. I’ve always known the story behind the concept of the album, but it never struck me as all that deep. The band created a character that was trying to escape the hate filled world he lived in only to find that the utopian society he wanted was just as messed up as the one he just left. Grass is always greener, huh? Voivod also created a wondrous world and filled it with social and politic commentary that reflects the world we live in today. Going back and listening to Dimension Hatross in depth has given me a much greater appreciation for this album, and a greater understanding of the complexities of the story. By God, these guys created warring factions within a universe! That’s pretty awesome! Concept albums used to turn me off, and that’s probably because the stories sucked. Voivod, amazingly, created three concept albums in a row and were able to keep the story moving along and interesting. I don’t think I could ever get tired of this album. There’s inevitably something new for me to pick up every time it goes through its rotation. For me, it’s a truly timeless piece of music. - Pope JTE
Buy here: Dimension Hatröss

Awesome record. The first 5 or 6 Voivod records are essential.

Woody - The first two are a bit tough to listen to, but the next 3 - 4 are freaking incredible. I also really liked the last two they did. Such an unusual band and there have been none that have captured that sound again.

Ha! I hear ya, but I love War & Pain. It's rawness is so charming. Have you heard the demo that they did before the 1st record?

Metal Blade reissued War and Pain in 2004 with a bonus disc with all the demos and live stuff. RAW! There's live covers of "Witching Hour" by Venom and "Chemical Warfare" by Slayer.