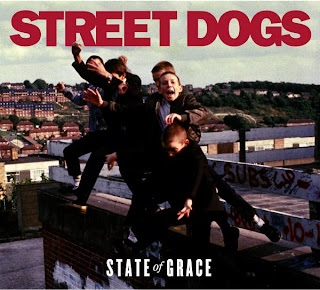 Man, this one caught me off guard.

I'd heard of Boston's Street Dogs before. Seen some discs lying around somewhere, but never had the chance to have my heart ignited by 2,400 lbs of Bostonian raving Irish dynamite before. With my chest wall exploding in 90 different directions, bursting from the Dog's brimming passion, vim and fire, I collapsed completely spent at my desk to write this review. Forgive me if my hands tremble while I type.

The Street Dogs were formed by gravel-throated shouter, Mike McColgan, former lead singer of the street tough, South Boston Irish punk rockers The Dropkick Murphys. After leaving the band following their first album, McColgan, a veteran of the first Gulf War, left music to join the Boston Fire Department, but after the trauma of 9/11, he came raving back, loaded with a belly full of venom and a heavy heart for the fire fighters lost in the tragedy. Adding former members of punkers, The Bruisers, and the former Dropkick drummer, the Street Dogs were born.

Now, seven years later, McColgan's spleen is still just as full of passion and bile. This is a brilliant, old school punk record, completely confident in itself and ready to stand on the pedestal next to old standards like The Clash and Stiff Little Fingers. McColgan carries more energy in his shout/singing than a thousand Green Day pretenders. This man feels his music, every note, every beat, every word. And with that, he only sings about what digs deep in his craw and buries itself six-feet down into his heart; freedom, unity, grace and the fading American dream. It's a fucking riotous, heart-sang-on-his-sleeve approach that is downright exhilarating. 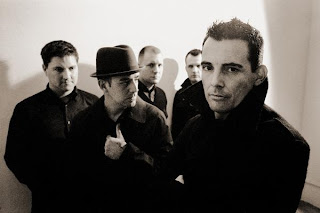 "Mean Fist," starts this rollicking assault with all cylinders firing. Riding a walloping bass line, guitars cut in like machine gun fire, leading to the big Clash-esque chorus and shouted backing vocals. This is a huge, sloganeering, stand-on-a-soapbox-and-shout-it-to-the-world chorus, rousing and energizing. Big chugging guitars ride this baby like a race horse steaming down the tracks. This is a huge punk song, so fucking old school UK punk in it's approach I was floored when I first found out the boys were from Boston and not from across the pond. Think New Model Army, think the Clash. Think whatever you want to, but think that this is fuckin' brilliant.

"Kevin J. O'Toole," is a boys-gathered-at-the-bar, beers-in-fist tribute to fallen colleagues including McColgan's uncle, O'Toole, a former firefighter. This is South Boston in a song, this is the pride of the Irish, the pride of the community, the heart of the neighborhood, wrapped up in swarms of charging guitars and McColgan's most impassioned sing/shouting. "Tonight, tonight, tonight/we toast to you/To give respect to for all that you served through." Man, take a deep breath when this call for remembrance is playing, tell me if you can't see the beer mugs swinging in unison, grown men shedding tears over lost friends--soldiers, firemen, policemen. I bet that beer never tasted sweeter. All the way to the snare drum roll and bag pipe funeral goodbye at the ending, this is song's a real gut-check.

Old school influences are given respect with a massive reworking of the Skids "Into the Valley," pounding out like some lost Clash classic. Big shouting choruses, totally rousing in its approach. This is a closed-fist, punk blast of energy. Adhering to a strict non-violence ethos, "Rebel Song," comes across as more of a call for unity over barbarism than a revolution. But you'd never know if from the tearing guitar, stuttering verses and gangland sing-along chorus. This song is a terrorizing blitzkrieg of pure old school adrenaline, powerful and visceral, damn perfect in its execution. Guitars chiming, bass charging along like a madman escaped from prison and the drums being beaten harder than Mike Tyson's face in his last fight. There's understated eloquence in the lyrics, along with pure spleen-venting anger, strung together with enough melody to make the whole thing go down like a fine single-malt whiskey-smooth but with a nasty bite. Violence in performance not content. How fucking punk is that? 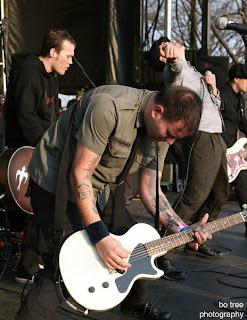 "The General's Boombox," the band's homage to Joe Strummer, rages next, Clash-like in attitude but also very reminiscent of early, early Alarm, back when they were a sloganeering punk band unleashing ravers like "The Stand." Stinging guitars, resounding group background vocals, and another can't-miss melody. McColgan's voice never sounds more Irish than it does here, blasting out like a nasty-spirited Billy Bragg after a gangfight. "Guns," is another standout, a fierce rocker with monstrous bass driving the message of anti-violence right into your pounding heart. Guitars slice through the mix like a lumberjacks chainsaw cutting through a forest. The title track "State of Grace," hammers in a distinct Irish flavor to this future punk masterpiece. "Free," even slows things down enough to bring in an acoustic guitar while McColgan impassions about his search for clarity and some grace in this confusing, muddled up, fucked up world. Another massive rousing song on an album chock full of rousers.

Running wild and tough from the mean streets of South Boston, The Street Dogs have eaten through their restraints and unleashed one snarling, spittle-faced, pitbull of a punk album. This album is so fucking south Boston, so brimming with Irish flavor and pride, you can almost taste the smoke in the South Boston air and see the litter on the streets. These are living, breathing rebel songs, from and for the working class.

Without a doubt, this is one of the best conceived and executed punk ravers to attack me in a long time, thrusting it's ugly, salivating maw around my gut, digging its canines through my thick hide until it struck something vital. Something that I care about.

Fuck the pound, if these dogs are loose, I'm joining the pack.

I had the great good fortune to share a beer with Mike and the boys after a Murphys show at Thurston's in Chicago, 1998. Some of the best people I've ever met. Mike was leaving the band for Boston FD, and there was a twinge of sadness mixed with the after-show carousing and general cheefulness. I didn't keep up with the DMs, and was wondering, today, out-of-the blue, whatever happened to that excellent bunch. I enjoyed hearing all the Al Barr era stuff I had missed out on - all first-rate street punk, actually they transcend that label, and many others. Just amazing songwriting and musicianship all the way around. The real surprise came when I heard Mike's "new" (to me) band, the Street Dogs. It kn ocked my ass OUT, COLD. AHHHHHHHhhhhhhhharg!! This sh*t is unbelievably great!!!! What a titanic talent! Long live the dogs!!!