Tuesday's Zen - The Pigeon Detectives - This is an Emergency 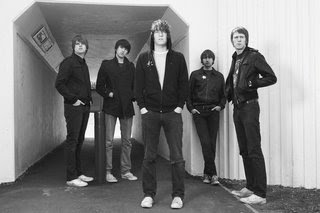 You know how it is with spiky indie-rock punsters, right? You wait around all year for one to start promoting a new album, and when you've just about given up, two of them turn up at once.... tight jeans well faded, mop-top's properly coiffured, waving their arms in the air and holding aloft shiny new vinyl.

A couple of days ago Winston's Zen brought you proof that Glaswegian burlesque boys The Fratellis are up to their old tricks again with Mistress Mabel, the first single taken from their new album Here We Stand. Today, attention shifts a couple of hundred clicks South, to Rothwell, where The Pigeon Detectives have been busy penning the follow up to their slow-burning forest fire of a debut album.

Set to be released on May 26th, two days short of a year after the release of 2007's Wait For Me, new LP Emergency will doubtlessly arrive amid a flurry of publicity, ensuring it's status as a surefire hit. But will the new material offer enough progression to satisfy the ever-so fickle UK indie market?

Well, the first single to be released on May 12th, the (almost) title track, This Is An Emergency hints at a slightly darker, more introspective side to the Yorkshire lads. Inevitably (and probably wisely) the youthful exuberance of Wait For Me is less emphasised, the result, is and encouragingly serious sound, humming with a growing maturity.

See for yourself below - this bird ain't ready for plucking just yet.
Neither the album, nor the single appear ready to pre-order just yet. I'll keep you informed...