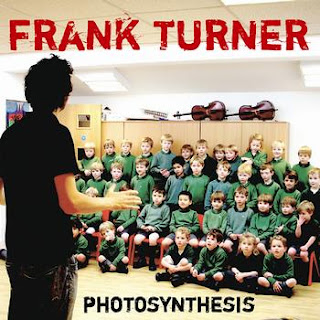 
Critically acclaimed by the likes of Kerrang! they may have been, but Million Dead’s decidedly shouty brand of punk rock was just that bit too noisome for their efforts to ever fully penetrate Winston’s playlists.

After the bands demise in 2005 however, frontman Frank Turner concentrated on solo efforts that had already been earning him rave reviews before the split. Turning his back on the sound that he credits on Back In The Day with saving his life, he restyled himself as a folk rock troubadour, wrestling the genre back from the grip of monochrome careerists with a couple of brilliant EP’s and last years Xfm New Music Award nominated album Sleep Is For The Week.

New single Photosynthesis is the first to be taken from Frank’s second full length solo album, Love, Ire & Song, and paints a pretty clear picture of an artist at the top of the song-writing game. The jaunty jig of a tune, and uplifting chorus

are as life affirming as Turner's lyrics are inspiring. The single's peg line may well serve as a wake up call to many listeners, whilst bring a smug smile to the lips of others

“If all you ever do with your life,
is just photosynthesise,
then you deserve every hour of those sleepless nights,
that you waste wondering when
you’re gonna die"

And if that’s not enough to convince you this track needs to be bought, the video below, filmed with a whole class of schoolchildren as extra's should sway anyone with a heart made of a carbon based material. Press play.

Something akin to a less political (therefore more contemporary and relevant) Billy Bragg, Frank Turner is fast becoming my new hero, and singles as good as this one will do nothing to dissuade me. Frank by name, Frank by nature, this is music with soul and feeling and with a message that might just change your life!

Frank Turner’s new album Love, Song & Ire is out now, and Frank is touring extensively and playing the major (and some not so major) festivals right through the summer. Catch him if you can.

www.winstonszen.com
Posted by The Ripple Effect at 12:42 AM