A Sunday Conversation with Hollow Corp. 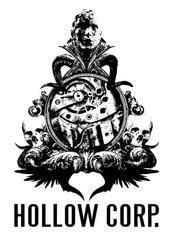 Hollow Corp. have been bowling the metal world over since the release of their latest album, Cloister of Radiance, and now they're bowling over the Ripple offices and laying waste to our beloved couch. Sit back and read how our French super heroes find their never ending inspiration, their approach to pummeling their listeners into submission, and dealing with the stresses of the music industry.
When I was a kid, growing up in a house with Cat Stevens, Neil Diamond,
Johnny Mathis, Perry Como, and Simon & Garfunkle, the first time I ever hear Kiss's
"Detroit Rock City," it was a moment of musical epiphany. It was just so vicious,
aggressive and mean. It changed the way I listened to music. I've had a few minor
epiphany's since then, when you come across a band that just brings something new and revolutionary to your ears.
What have been your musical epiphany moments?

Genre's are so misleading and such a way to pigeonhole bands. Without resorting to labels,
how would you describe your music?

To be honest...we don't know ! It's dirty,we play really bad, it sounds awful, but actually it's
fun ! 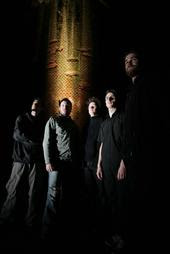 Talk to us about the song-writing process for you. What comes first, the idea? A riff? The lyrics?
How does it all fall into place?

Usually we start with a few ugly riffs brought by one or two of us, then we work the shit
together, spend a huge amount of time in endless and often sterile discussions, but at last
we finally agree on the way of arranging it, then Stef puts some eery growls on it, and that's
it ...
In songwriting, how do you bring the song together? What do you look for in terms of complexity? Simplicity? Time changes?
That's were the war begins ! We often try different ways of building the pieces, see if it
works or not, and when it sounds good to us, we move on to the next one. We are trying
not to get bored or boring ... Sometimes we do prefer simple approaches, sometimes we
experiment weird constructions.

However, we do not look for pure complexity.

Where do you look for continuing inspiration? New ideas, new motivation?
In the deep, dark, dirty and stinking bottom of the toilets, in the morning, after a long and
hard night of booze !
When you write a piece of music, do you consciously write from the mind set of being different
than what's out there now?
It is not a permanent obsession, but yes, we try to do so, though it's sometimes hard not to
sound like the bands we are influenced by. 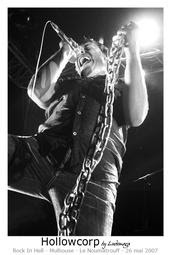 The business of music is a brutal place. Changes in technology have made it easier than ever
for bands to get their music out, but harder than ever to make a living? What are your plans to
move the band forward? How do you stay motivated in this brutal business?
By molesting and killing mongooses ...
Seriously, we will modestly and humbly try to do our best, and we are quite aware we won't
ever be able to make a living with the kind of gloomy and dirty music we play. People
around us (label, booking...) are very helpful and are implied in the project.
Describe to us the ideal (realistic) record label and how you'd work with them, and they with you.
... well, we don't really know ...

A small and independant label, like Dental Records, that's fine for us now.
Maybe a record label with a psychological department specially conceived for mentally
sick people like us ... !!!
We, at The Ripple Effect, are constantly looking for new music. When we come to your town, what's the best record store to visit?
There was a cool shop called Surfer Rosa in Strasbourg, but unfortunately it has definitely
closed...so we currentlty don't know another interesting one... So, if you come in Alsace, as
a consolation, you absolutely have to try choucroute and flamed pies which both are
inescapable gastronomic specialities, not to mention the wine and the Terrible Munster
Cheese , our local bio-weapon !

And, if you wouldn't mind, I have one more question. in a recent email that you sent me, you mentioned that you were entering the studio to begin work on the follow up to Cloister of Radiance (haveI mentioned what a brilliant album that is?) . . . have you set a completion date yet? What
stage is that work in? Any songs in pre-production?
We are planning to begin the recording of the next record in summer '09.
Not before. We are currently working on new stuff. A few songs are already done.

Waveriders, keep your eyes on these pages for upcoming news on Hollow Corp. Once we hear about, you'll hear about it. Racer . . . get the duct tape. We need to fix the couch again.
Posted by The Ripple Effect at 1:42 AM