Somewhere between getting drunk at noon and bumming around with truck drivers and pumping up and getting all blown dried up for the media and becoming a lance Armstrong squeeze, Sheryl Crow visited the sacred Trinity Church in Toronto, home to the seminal Cowboy junkies album The Trinity Sessions. And to paraphrase the great Dave Marsh reviewing Rod Stewart’s Every Picture Tells A Story: was there ever a time that rock music sounded this easy, this natural?


November of 1998, and Sheryl sets up warm up gigs for herself after recording what is my favorite disc of hers, The Globe Sessions. Playing with an acoustic guitar, Tim Smith accompanying her, and some minimal percussion by a gent named Vegas, SC runs through a couple of quick crowd pleasers before mixing some of the new tracks from the just released Globe Sessions. The joy here is threefold: the outstanding recording direct from the soundboard lets you hear both the ausdience and the fingertips in the strings, SC’s self deprecating and genuine between songs chatter, including some messed up intros that would have been edited out of an official live album, and some truly stellar versions of songs that have been, thanks to mid-tempo non-offensive radio, drilled into our heads for the last decade.

Seriously, its been almost 20 years since Tuesday Night Music Club released a hit track about getting drunk in the middle of the day with a bunch of losers, and I still remember the first time that I listened to that pleasing little bit of ear candy and thinking it was an especially subversive bit of pop once you got under the production. A few years later, The Globe Sessions would feature far more of Crow’s pop smarts, but also some honesty about loss and lonliness and the perils of losing touch. Taking these songs on the road was a great idea.

"If It Makes You Happy," is a good opener, and like any chess player, a good opening gambit. She’s warming up, which is fine, I don’t think that the audience is warmed up either. They would be soon. "A Change Would Do You Good," comes along at a good clip, the staccato time kept on her guitar, and at a slightly faster clip than the recorded version, and the interplay between Sheryl and Tim makes for a lighter version of the song. Tim’s breathy vocals compliment Sheryl in the best parts of the chorus, mimicking her delivery while dropping into harmony for the final recitation.

The botched intro to "My Favorite Mistake," makes this bootleg all the warmer. “Hang on, forget that intro, that never happened.” Sheryl tells the audience, as she figures out that she has a short in her setup. And without much ado, she segues into "My Favorite Mistake," of the best of the glove sessions album. With the arpeggiated guitar behind the crystal clear harmony on the chorus, the song is a minor classic, and the audience, most of whom would not have known the song before that moment, could have walked out singing the melody line with little difficulty. “Maybe nothing lasts forever/even when you stay together” a bittersweet line that many a marriage can attest to.

"It Don’t Hurt," is played up tempo as well, a song about all the silly things that you do to get over the boyfriend you just broke up with, sung with a little more passion that the lyrics would make you think. The song winds down with in the same sort of strumming frenzy that you and your friends engaged in while playing with your band in the garage: you didn’t figure out where to stop when you started the song, did you?

The center piece of the concert is the other devastating track off of the Globe Sessions, "Anything But Down," made into a medley with "Is It Like Today," a powerful track in Tim Smith’s hands, from Carl Wallinger’s World Party. With "Anything But Down," Sheryl moves into the Beatles’ songwriting conceit: using a word’s meaning to do double duty (ala "Please Please Me") and she wrings the best of the dual meaning out of the phrase. She sings passionate 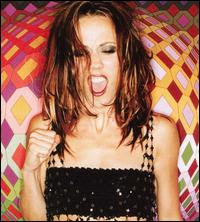 ly about a one sided relationship that is crashing down (and Sheryl may not have the perfectly clear voice of an angel that Sarah Mclachlan has, but she holds her own here live, complimented well by Smith on the harmony.) I know you wish you were strong/you wish you were never wrong/I got some wishes of my own she sings, her voice wringing all the wistfulness out of the last word on that line before segueing into a memorable version of "Is it Like Today." Tim Smith takes the front mike for the only time that night, Sheryl melding her voice to his in harmony instead of the other way around, and it is a beautiful sonic transition from rest of the show.

"Strong Enough," is given a fairly heartfelt run through, given that it may have played more than enough times by 1998 (“An oldie but oldie.” She comments) Lie to me/I’ll believe she intones on the chorus, and anyone who has reached that point in a relationship remembers that moments of lying in the dark, saying the lies that the other wants to hear. ," is a Bob Dylan cast off that is my least favorite song from the Globe Sessions, but here is it a decent enough hoe-down to run through!

"Difficult Kind," is haunting, echoing Timmon’s vocals in the church a decade earlier, and Sheryl’s voice caries the full weight of the song, reducing the delicate picking of the guitar’s interplay almost to an afterthought. More than once I’ve found myself wishing that they’d closed her than with "Everyday Is A Winding Road," but the latter is a singalong crowd pleaser that the quiet "Difficult Kind," will never be.

Usually found with this bootlet are two songs, "When Love is Over," and "Father's Song," that have yet to appear on commercial albums. They sound like the serviceable soundtrack fodder that they might have become. Music to crunch popcorn to as you walk out on the movie’s key grip credit. They have had the the warmth and originality produced out of them as we might squeeze a lemon to get the last bit of juice. You might find yourself listening to them as a curiosity, but you’ll likely be far more tempted to hit play on track one again, to savor the guitar girl that you’re far more than likely to fall in love with over your beer.

I recently came accross your blog and have been reading along. I thought I would leave my first comment. I don't know what to say except that I have enjoyed reading. Nice blog. I will keep visiting this blog very often.