Ripple Theater - The Who At Kilburn 1977 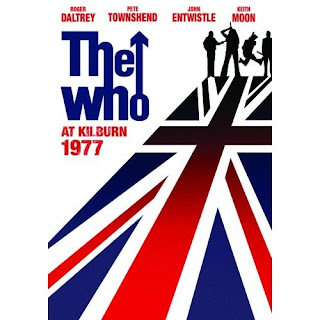 For some reason, we don't seem to get a ton of music DVD's here at the Ripple Office, but when they do come in, Pope and I salivate like Pavolian dogs. Within moments, the popcorn is popping, the lights are dimming and we're sitting back in front of our office theater, feet kicked up and waiting in anticipation.

And on this particular day, we were not disappointed.

Long sought after by archivists and The Who completeists, At Kilborn 1977 finds The Who reunited on stage for the first time after more than a year to film a concert for The Kids Are Alright movie, and man, is it ever a treat. Most of the footage was re-shot for the final version of the film, but what we have here is a holy grail of Who, a fiery, ferocious, tear-em-up affair. After a slightly tentative, mildly sloppy beginning with "Can't Explain," the boys quickly find their groove, simply tearing through one masterpiece after another. Everything you love about The Who is here, from Pete Townshend's windmilling guitar antics, to the raging fingers of the Ox, to the microphone flailing, chest-bearing vocals of Roger Daltrey, and the mind-blowing drum histrionics of Keith Moon. Launching through "Baba O'Reily," or "Substitute," it doesn't matter all the songs that you love are here. 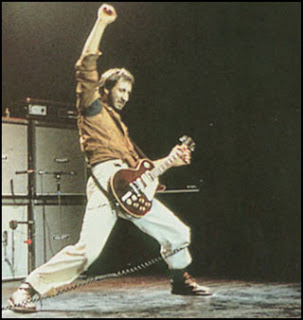 Check out the charging version of "My Wife," with the Ox on vocals, proving to be no second-rate singer, or the beautifully done version of "Behind Blue Eyes." By this time in the show, the boys were all on the same mental frequency, communicating with music telepathy. Keith Moon, in one of his final ever performances still brings a mind-blowing dexterity to his drumming, even as his condition was rapidly fading. But perhaps, the greatest highlight of all is the pre-LP version of "Who Are You," which simply rocks much harder, with a looser feeling than the studio versions.

I'm no Who expert, but I'll tell you, as a fan (and for any fan) this concert is a golden, near-revelatory moment.

But the fun doesn't end there. As a bonus, the two-DVD set includes some beautifully raw archival footage from The Coliseum show in 1969 as The Who was touring Tommy. Despite the grainy, often off-lit video footage, the music is stunning. My son and I dropped out jaws open in amazement as Keith Moon launched drumming into the stratosphere on "Young Man Blues." Throughout, the guitars were fierce, the bass maniacal and Daltrey's voice solid. A definite, can't miss show.

Together, these are two discs that no Who fan, or fan of classic rock for that matter, should be without. A proper and due homage to one of the great bands of all time.

If I wasn't reluctant to put money in the pocket of Pete Townshend (a man who's alibi does not convince me) I'd say this was the DVD for me!

.......
And I've been trying to slip a mention of Pavlov's Dogs into a review for weeks!

Sometimes, the opportunity just presents itself. Next I'll be trying to get Freudian psychoanalysis in there. See if I can tire iron that one in somehow. :)

Great review! I think that Moonie is the focus of this DVD, unintentionally or not. But isn't that always the case with Who related stuff from this period? I just got around to posting my own review at http://isorski.blogspot.com/2009/01/dvd-review-who-at-kilburn-1977.html. Check it out!