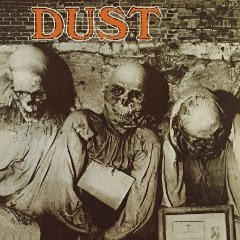 With Marky Ramone being a recent, and very gracious guest on our radio show, there really was very little surprise which band was going to occupy this month's Proto-metal Report. For those of you who want to hear what Marky had to say about his old band, the Ramones, Phil Spector, the great CBGB days, and see why the show was chosen as one of the Best Shows of the Week at blogtalkradio, you can still download the podcast for free at Ripple Radio. But for today, we're going back a little farther in time to this nasty little treat from early in Marky Ramone's discography.

Formed in 1968 by guitarist/vocalist Richie Wise, bassist/guitarist Kenny Aaronson, and a still then teenage, Marky Ramone (then Mark Bell), with lyricist Kenny Kerner, Dust cut a path rarely traveled at the time. While most of the early heavy proto-metal vibe at the time was coming from the U.K. and Europe, Dust tuned in hard and heavy to the darker, psychedelic early metal vibe. Plying their trade in New York, the boys were quickly signed to Kama Sutra records and released this vintage undertaking of ball's out, in your face, pre-metal corruption.

"Stone Woman," starts off nicely enough with a charging guitar riff, but doesn't really tell the story of what awaits you. Appropriate sounding for the day, the blasted to the front of the mix overdubs of slide guitar sound dated today and detract from the real song underneath. Buried down there, Marky Ramone is instantly proving himself a drummer of record, beating out beautifully complex polyrhythmic hard rock runs. We'll consider this song a gentle misstep and move right on to the meat of the album. 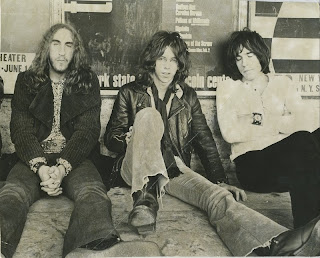 "Chasin' Ladies," the second track is a beauty. Following Marky's drum into, the boys quickly drop right into a funky, slightly southern groove, deeply indebted to Mountain's "Mississippi Queen." Big chords, slashing guitar fills and Marky keeping beat like a wild child freshly released into civilization. Richie Wise's voice, gently distorted, brings an edge of urgency to the track. But what really blows my mind are the fantastic, hugely looping basslines of Kenny Aaronson. Later to go on and play with the Stories and Rick Derringer, Aaronson plays like a freak of nature. Just listen to the stuttering breakdown midway through. He's throwing in more notes per line than should be humanly possible, plucking away like some 8-fingered mutant. Huge basslines, running up and down the neck, Aaronson's bass doesn't anchor the song to the rhythm, rather he unleashes the beast and sets it out to hunt for fresh prey. And when Wise finally takes the handcuffs off and rips out his first solo, it's a beaut. His tone sounding totally original, like his fingers have been laced with electricity. This song's a winner.

"Goin' Easy," finds these three New Yorkers dropping down into the deep Mississippi swamp for a muddy tour through some slower southern-tipped blues. While totally out of sync with the prior song, it still holds together here, tipping a hat towards the wandering muse that probably kept these boys from ever hitting the charts. But listen closely, there's a beautiful melody there as Richie sings "And I love you/and I'll never let you go." Again, a bit too much dubbed slide guitar for my taste, but still a worthy effort. 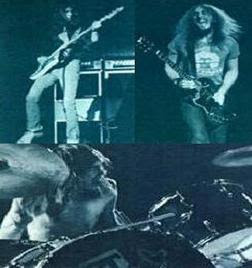 All of which brings us to "Love Me Hard." While many a purist will make a strong argument that the overt Sabbathism of "From a Dry Camel," is the album's centerpiece (a song we'll get to in a moment) this frenetic, charging track is the pinnacle of this Everest of proto-metal for me. The opening guitar riffs chugs out like a blind rhino in heat, blasting right into your face. Aaronson's looping bassline shoot the song off into some nearby linear orbit, and Marky Ramone's drums need to be heard to be believed. And it's not the obvious fills that captivate me so much. It's the stuttering, missed-beat, rummaging pounding he lays down underneath the main riff that drops my jaw. After a mid-song breakdown that probably goes on for one or two bars too long, the drums come pounding back, mutating right back into the opening charging riff. Wise's voice is at it's finest, adding a real sense of ferocity and passion to the singing that even allow us to overlook the occasional lyrical misstep like "Now I'm standing here alone/Alone and by myself." (as opposed to be alone with all those other people, I assume.) But even then, the song is shoved down your throat with such conviction, Wise sells it completely. No doubt about it, this blast should rightfully take it's place up there with the best of the early American proto-metal.

Now, I've already alluded to the 9:53 minute ode to B-school horror film, gloom and doom that is "From a Dry Camel," and without a doubt this song deserves the praise that gets heaped upon it. This is full on, massively mentally distorted Sabbath at its frightening best. Deep, impossibly heavy, trudgingly slow riffs blast out like the world's worst acid trip. This is without a doubt the most menacing sound coming in 1971 from some place other than Birmingham, England. Plowing forward at this corpse pace for nearly four minutes, the steam picks up midway, acoustic guitar flailing over the lobbing bass, gathering momentum, picking up speed straight to the acid-fried guitar breakdown. A pure on assault of Sabbath-fired doom metal that probably scared the shit out of some kids at the time.

"Often Shadows Felt," is a a mostly acoustic come down from the mangling your soul just took with "Camel," featuring a gorgeous melody, some nice strumming and some more astonishing Aaronson basslines. Finally, "Loose Goose," ends the affair with a jaunty, boogie woogie, instrumental, bluesy blowout. Written by Aaronson, you won't be surprised that the bass struts all over this song like a coked up pimp hunting for his ladies. Fine stuff, indeed. 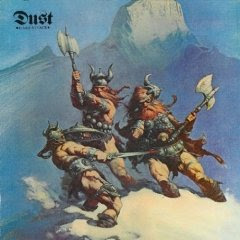 Dust went on to record another solid album, 1972's Hard Attack (which we'll get to someday) before disbanding. Mark Bell's path is well chronicled, joining the Voidoids before adopting his famous last name and blasting punk to an unsuspecting generation. Aaronson's musical career was no less satisfying, remaining an in demand bass player, and Wise and Kerner went on to form a production team, responsible for such gems as The Stories and the first two Kiss albums. But this album isn't about what heights the former members of the band climbed to, it's about the birth of heavy metal. That freakish scientific experiment when gentle psychedelia and blues was transmogrified into something altogether terrifying, the snarl nosed, saliva toothed monster we all know and love.

I recently acquired both Dust albums after years of wondering what they sounded like. Hard Attack used to be in every NYC record store in the 80's for something like $35.

I wonder if Dust and Sir Lord Baltimore ever played together.

It would've been a helluva show! Next time I talk to Marky I'll try to remember to ask him. My gut tells me, they did.

Can't wait til your proto-metal report on Grand Funk tears these pages apart later this month.

Just noticed that "Chasin Ladies" does owe a big debt to "Mississippi Queen."

Ask Marky why no cowbell?