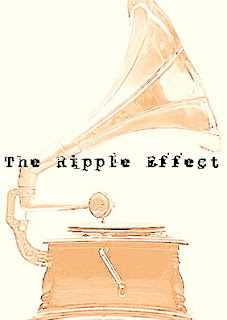 The Ripple offices got slammed a few months back with a pile of music that took us in practically every imaginable direction. I focused on the extreme metal stuff coz’ that’s what I do best. Racer tackled the stoner metal and garage rock . . . again, coz’ that’s what he does best. So, that left a bunch of stuff that didn’t fit into our normal genres, but stuff that left us with our heads spinning in its utter brilliance. The bands that we’re highlighting here feature that delectable flavor of doing something just to the left of what everybody else is doing, and that’s what really captured our imaginations and tugged our ears closer to the speakers. As for the music being truly indescribable goes against everything that we are. I will break out every thesaurus that I can just to fit the proper words in their place. I do it for you, Waveriders.

The added bonus . . . I get to broaden that already amazing vocabulary that I possess! 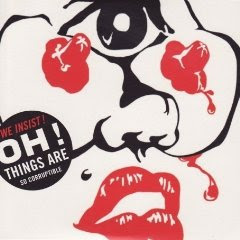 We Insist! – Oh!Things Are So Corruptible

The moment I put this album on my breath was sucked out of my lungs. A heavy ass acoustic guitar riff assails the senses followed by a somewhat monotone vocal performance. Within a minute, the subtle electric guitar flourishes give way to the utter chaos of the bands alt rock sounds. The music ebbs and flows, one moment bursting with all the angst in the world, the next moment it all settles for a moment of calmness. “An Architect” is one of those great attention getting tunes, simply demanding that the listener drop everything to pay close attention to what is going on. If you’re not paying attention, you’ll undoubtedly miss the intricacies and nuances hidden within the music.

“Imperial Catechism” is another volcanic eruption of sound and, at times, reminds me of some of those melodically bizarre moments from Mr. Bungle. The frantic drumming broken up by those eerily monotone vocals and accompanied by swirling guitar patterns, it’s avant garde moments like this that compel me to tune a more critical ear to what I’m hearing. It’s so unusual in comparison to the music that we typically hear over the airwaves or we receive in the Ripple offices that I can’t help but stop and take notice. Definitely marching to their own beat, but dipping a big toe into the frigid lake of accessibility. I’m loving the balance between chaos and order!

Other highlights on Oh! Things Are So Corruptible are “Seclusion” with the delay drenched guitars holding down the rhythm through the opening portion and then simply rockin’ out as the rest of the band drops in. The haunting “The Great Disorder” with that great vocal performance and percolating bass line drumming away in the background. “No Coward” as its rhythms pummel away at the senses. Man . . . this album is filled with these moments of sheer brilliance! I’m not gonna’ lie to you, this is a challenge to listen to because of the odd time signatures breaking up some incredible grooves, but it’s this same hurky jerky motion to the music that draws me closer and closer to it. I welcome this challenge to what I know, or think that I know, about music. By the time you get to the last track, “Early Recollections,” you’ll be left shaking your head in a puddle of your own drool. Yeah . . . it’s that good! 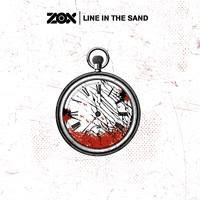 Zox – Line in the Sand

These guys have laid out one funky ass and completely unpredictable album. Line in the Sand was an immediate hit as I bounced up and down in the control room of the Popemobile. I swear I couldn’t stop shaking my ass as I drove from one seemingly important destination to the next. The title track is such a stunner, and in so many ways, we’ve heard it before. Zox have apparently been paying attention to their rock ‘n roll history, gleaning bits and pieces from all of the artists before them. But, don’t go thinking that these guys are a rip off of anyone. They’ve truly developed a sound that is all Zox. Accessible yet laced with danger. Comfortably familiar but spoken in their own voice.

By the time you’ve made it through “When the Rain Comes Down Again,” you’ll know what I mean. At times you’ll think you hear that influence of bands like U2 or The Police, especially the ‘80’s stuff, but what Zox have done is slapped a coat of paint over the house that Bono built and gave it a fresh and vibrant look. Beautiful melodies and urgent performances grace the songs, giving us a glimmer of some great things that will be happening in the music world. Take one listen to acoustically driven “Goodnight” and you’ll hear it. A perfectly compelling song that’s as uplifting as it is somber.

“Towards Los Angeles” is a brilliant tune about “escaping” to the City of Angels. The chorus gets me right there every time I hear it and the words are finely smithed to give us that sense of desperation of dropping everything for a dream. “Another Attack” is a trippy little funky grooved out number. If your rump ain’t bumpin’ through this one then you’ve got no soul. “Don’t Believe in Love” features a cello. I love the cello. It’s such a sad sounding instrument. So, that should give you a sense of this songs subject matter. God . . . it’s never sounded so good to be heartbroken!

Though both Zox and We Insist! are sonically different from one another, they do have one thing in common. Both bands perform with as much soul and integrity as one could muster. One is experimental and pushes the boundaries of alt rock (dare we call this progressive alt?) while the other takes the elements of our past rock ‘n roll heroes and adds a modern feel to it. Two completely different bands going down similar roads to satisfy that yearning to produce the music that gives them purpose. And these guys aren’t all we have up our sleeve over here. The next volume will feature two more bands that are taking these age old sounds and doing their own thing. Until then . . . keep rockin’! - Pope JTE
Buy here: Line in the Sand