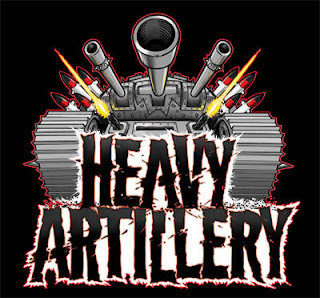 One of the great things that we’ve noticed since Racer and I started this Ripple Effect beast is that there are a bunch of people out there who love music. Not just to the point that they listen to it at work and tap their toes to the rhythm. No . . . I’m talking, really love the stuff to the point that they risk all for the love of it! I’m talking about the guys and gals who pony up the money to record, promote, and distribute some of the finest music that you’re not listening to. Record labels like Indie Recordings, Transubstans, Prosthetic, Small Stone, Pulversized, and now . . . Heavy Artillery. These guys have made that old school metal sound their bread and butter, and having grown up listening to the original waves of the stuff, I can appreciate the stellar effort that these guys have put forth. I mean, hell . . . there are so many times that I sit back and think back to the days when I wore my denim jacket with the Slayer back patch on it. It takes me back to when music was the most important thing in the world. I don’t know how y’all keep finding such great music, but keep doin’ what you’re doin’! 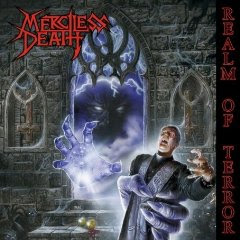 Merciless Death – Realm of Terror
Now, I’m not going to proclaim that all of these albums are the best things you’ll ever wrap your ears around. However, I will say that the energy and passion that Merciless Death put into their music is greater than that which I’ve heard from some of the stalwarts of the industry. These guys come at you with all of the fire and brimstone that the dark and shady places can muster, and all with a slightly under produced vibe. Those rough edges are a good thing. It shows that this band is real and the fun that these young musicians are having shines through the muddied mixes. A slickly produced album wouldn’t come across with the same urgency or intensity, and would be more of a hinderence than a benefit. Realm of Terror captures the classic thrashy doom sounds of bands such as Celtic Frost or Possessed. Heavy and doomy, intensely fast with well timed down shifts, this California based trio bring seem to save their finest moments for the end of the album with tracks like "Tormented Fate" and "Summoning of the Ancient Ones."
"Tormented Fate" is a speed freak with the vocalist channeling his inner Tom G. Warrior (Celtic Frost). For the better part of the tune, we’re being assailed with a up tempo beast. Then suddenly, as if these guys were driving a car and decided to drop the sucker into second gear for more power around a corner, the tempo drops into this mid range thrasher. What should have been a wreck on the other side of the corner turns out be this white knuckle, butt clenching, weaving ride to oblivion. "Summoning the Ancient Ones" will not only get the head bobbing, but the entire body. Opening with a groove riff and then bursting into a massive riff filled speed flurry, the tune captures the lads at, possibly, their finest. After riding the swell of speed, the band returns to the thrashy mid tempo opening riff to close out the tune. Keep an ear tuned into the drums and how they keep tempo through this complex number.
Uncompromising comes to mind when trying to describe this music, at least in attitude alone. Man, this takes me back to the ‘80’s when Morbid Tales, Seven Churches, and Hell Awaits were creating so much underground havoc. I don’t take all the doom and gloom too seriously, but there is something there in that these guys are more than happy to show that things are far from being rosy. Good stuff! 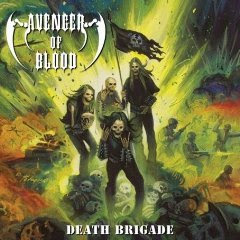 Avenger of Blood – Death Brigade
Avenger of Blood, though hailing from Las Vegas, Nevada, has embraced the distinct German thrash sounds of bands like Kreator and Destruction. Full on speed passages that are broken up by jarring tempo changes, growled out shouts of dissatisfaction with the status quo, and nifty guitar work through the solos set these guys apart from the rest of the bunch. Looking at the album art and liner photos, I can’t help but get the sense that I’ve been here before. This stuff takes me back to my high school days when I weighed all of a buck twenty and I, too, cut the sleeves off of my t-shirts to make sure I had that oh-so-special look. Leather pants, bullet belts, and arm spikes finish the ensemble, and amazingly, I’m buying into this bands look. Why? Because the music is full of real time aggression and attitude. Sure it’s all in fitting in with the scene, but it’s done with the right amount of honesty, integrity, and passion that I just can’t help myself.
"Death Brigade" is an awesome thrash happy track that inevitably will have the kids running amok in counter clockwise fashion. Kicking off like a steam driven freight train, rumbling down the tracks with the massive double bass drums acting as the pistons to this iron horse. Bellowing clouds of darkened death spew from the speakers until we’re pummeled to submission with a great mosh happy riff. I especially like the drum work through the break as the parts aren’t overplayed and add texture to an already multi-layered riff. "Bloodseeker" is more of a mid tempo, palm muted piece, breaking into a full sprint through the choruses. Like all of the songs on Death Brigade, this one features some outstanding guitar work at the solos.
It’s not so much that the riffs on this album are all that complicated, it’s just that they’re well timed in the placement of the songs. Avenger of Blood create a proper amount of tension with the speedy parts that simply explode with fury once the mid tempo riffs drop in. These guys have done a marvelous job of learning the tempo shifting techniques of those who came before them, and have added their own deathly sick sound to the whole thing. I’m encouraged for the future! 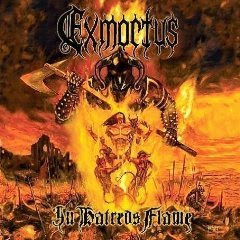 Exmortus – In Hatreds Flames
Rising from the urban sprawl of Whittier, California, Exmortus give us a snapshot of the youthful angst in the metal world. Uber-aggressive death tinged thrash is what you’re gonna’ find on In Hatreds Flames. What sets these guys apart from their Heavy Artillery peers is the somewhat neo-classical approach to guitar solos. Laden down with sweeps and the guitarists hanging on for dear life to their whammy bars, the guitar solos remind me of early Yngwie, just without the pomp. In fact, when The Red Neck Wookie stopped in the Ripple offices, he heard these guys and said, "These guys must like tuning their guitars," in reference to the whammy-rific action going on. Little did he know that Exmortus are made up of supernatural young men who weave a mystical spell over their gear and, therefore, never need to worry about such trivialities.
Though In Hatreds Flames isn’t the most varied metal album in the world, the band does show enough versatility to keep things from getting boring. "War Gods" is a speedy freak out that’s broken up with some serious mid tempo riffing."Valor and Might" opens with a tendon tearing bass riff rather than a full on, in-your-face slugfest. The bass acts as a kind of left jab to the big meaty right hook of the guitars. "Onslaught" is a hyper heavy agro tune that blasts the skin off of your face, but done with the precision of a demolition expert. "Wrath of Vengeance" is a frantic, chaotic wall of dissonance just to show that these guys can be unconditionally brutal.
Metal seemed to crawl back to the underground for a while, and it’s still creeping around down there, it also seems to be growing into some omnipresent cellar dweller. Disenchanted youth are picking up the instruments once again and hammering out their angst in the form of some fine music. Fists in the air, boys . . . you’re doing a mighty fine job and us semi-crippled, ex-moshers salute you! - Pope JTE

I feel so NON-METAL-ish when I read this post. Sigh.


Sorry I had to ditch out in the middle of your show last time, I was at a Starbucks sitting next to a group of hearing impaired/non-verbal people and believe it or not they were making a lot of noise so I had a hard time concentrating on your show.

I like this label a lot. They will be releasing the new At War in a few months.