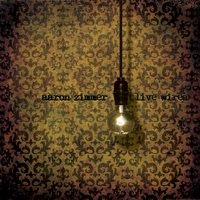 Here at the Ripple, we like to cover all sorts of music, in fact, the only rule the Pope and I have is that we only write about those bands and individuals who catch our ear. All you loyal waveriders out there no doubt know this. Metal, jazz, blues, African, stoner, psychedelic, post punk, hardcore, prog or reggae, no matter. As we say in our bio, all we ask is that you "give us something we can feel, because contrary to popular belief, we want to feel your pain. Or your joy. We want to feel it all."

All of which brings us to this great little ditty from the singer/songwriter, Aaron Zimmer. Originally from Nebraska, Aaron found his life falling apart, so he did what any of us would have done; quit school, moved back home, formed a band and started singing about it. So far so good. But what makes this album so special is the skill with which Aaron brings all this about.

Gorgeously crafted, impeccably produced indy pop, this is melodic rock for the new generation. Each song is brimming with melody and harmony, laden with Aaron's soaring baritone, and loaded with enough hooks to grab you by the ears and pull you into Aaron's world. And by pull you, I mean that literally. As is our policy, I gotta be honest with you waveriders. When I first pulled this baby out of the stack and put it into rotation, I didn't' want to like it. I'd been listening to mountains of stoner metal and had my full-on TCH-tinted goggles on. If it wasn't stoner, it wasn't worth ingesting . . . so to speak.

Imagine my surprise then, when, moments after playing the first track I found myself bopping along, humming in my own unsure way to a song I'd never heard before. And from then, each successive listen wormed this disc farther and farther into my ear, head, and heart. Aaron approaches his craft with sincere earnestness, but he's not overly dramatic. He wears his heart on his sleeve, honestly, forthrightly, and damn if that isn't refreshing. 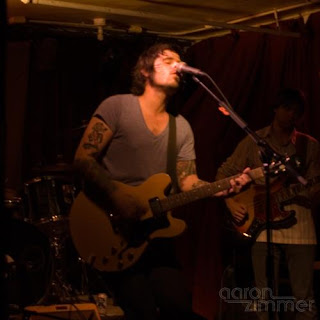 Now those accolades sound great, but in the end they don't add to anything unless the music can back it up. And here it does. Aided and produced by multi-instrumentalist Christian Cassan (David Byrne, Passing Strange) Aaron has put together a solid album of radio-friendly, yet still ballsy-enough to be interesting, indy pop. The entire albums shimmers and glistens with a glossy sparkle. Every thing Aaron does sounds so intimately familiar, yet completely new at the same time. It's as if he's touched into some cosmic zeitgeist of melody and tune and channeled it all back to us, sparkling new and fresh-faced.

"The Middle," starts us off perfectly and sets the tone for the album. Big chords roaring over a mid-tempo beat, breaking down to a dynamite, melodic verse. Aaron's voice instantly strikes you. Standing out from most in the indy set, this is a big voice, a commanding baritone capable of dropping down and still reaching up for the highs. It's twinged with just enough of a Midwestern twang to dig down and convey the emotion that Aaron strives to tell. The song builds to a big, radio-ready chorus placing it comfortably next to other masters of the genre, like Matchbox 20, Switchfoot, or Edwin McCain. After three or four listens to this track, you'll find yourself singing it in the shower while your scrubbing your nether regions, which is a good thing.

"Sink of Swim," flows out next, riding a smooth rhythmic beat, similar in some extents to the best of Joe Jackson from the Night and Day years. And then the tempo picks up, the strumming stronger on the guitar, building until a nice, very jazzy breakdown for the chorus. Slicing through the beat, throughout the whole song, a lone electric guitar wails, almost like the crying of a child, calling out in a show of emotion. No matter which way you slice it, this song's a winner. 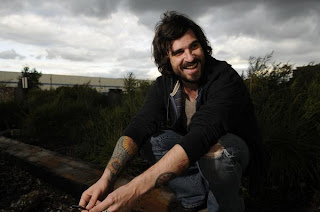 "Therapy," adds a slightly electronic touch to the intro, then quickly simmers down to the verse sung over a beautifully strummed acoustic. Sparkling, Fixx-esque guitars carry the tune while Aaron's voice shines big here, really big. A deep resounding, emotive instrument. A voice that truly belies his age, sounding much older, wiser and experienced than he has any right to sound. There's something about his voice, a haunting quality, that seems so intimately familiar, that you'd swear you've heard it before. But after hours and hours of wracking my brain (ok, I can wrack my whole brain in only one hour) I've come up blank in finding who Aaron can sound like. On this track, the best I can offer is Andy Partridge of XTC, a certain similarity in the tonality, particularly as they hit the high notes or the end of certain syllables. Or perhaps I'm just babbling.

"Change Your Mind," is another stand out track, a sure-fire can't miss, radio-friendly track just dying for it's chance at airplay. Something we plan to rectify on our Ripple Radio Show. Check it out and I guarantee that come the big chorus, with the charging guitars, percolating percussion, and can't-miss melody, you'll be toe-tapping, butt-shaking, head-bobbing or what ever it is that you do. No, you don't have to tell me, it can be your secret.

With all these highlights to mention, it may come as a shock to learn that I haven't even yet mentioned my favorite song, "False Alarm." What starts off as a very gentle, near acoustic, sound-effected vibe, turns at the drop of dime into a beautifully flowing song of redemption and second chances. Riding a perfect mid-tempo beat formed by the union of acoustic guitar, bass and snare, Aaron's voice reaches new heights as the song launches into the chorus, containing one of the best melodies on the album. Here, I sense touches of Blue Nile nasal-inflected vocals, slightly detached, yet intimately engaged, if that makes any sense at all. 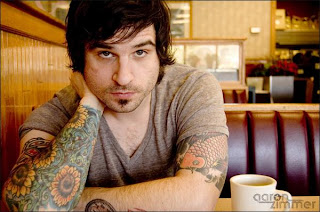 The rest of the album goes on in this vein, deeply emotive, very smooth indy pop, all polished to an impeccable shine. But after calling this stuff indy pop 19 million times now, I must confess, I hate that tag. Indy implies underground, or limited accessibility. That's not the case here. A more apt description would be to think of this as the new sound of smooth, FM radio songs, like the best of Toto, Chicago or Steely Dan. Fuse that sound with a later batch of influences like XTC, Blue Nile, and maybe a touch of Simple Minds, wrap it up with some exceptional musicianship, a touch of a rock and roll bite, and a barge full of melodies and you'll begin to get the picture. This isn't music for the underground, this should be on the tips of all of our tongues. Music to set as the soundtrack to our future days.

But don't take my word for it, simply go find out for yourself. Aaron's having a big blow-out bash, CD release party this coming Saturday. Judging by the greater than 240,000 plays "Therapy," has on Aaron's Myspace page, I'll bet it'll be a show to remember.