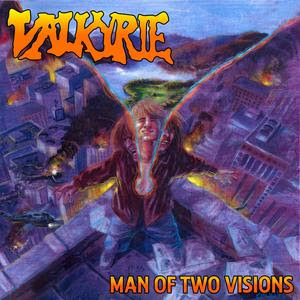 There are days when Racer and I truly feel blessed. Over the course of the past year, we’ve had the honor and privilege to work with some greatly talented writers and personalities within this borderless community known as the blogosphere. All of us add our own quirks to this constantly morphing entity and, from time to time, we at The Ripple Effect get inspired by the words that are smithed across the glowing pages of our PC’s. Such is the case with Valkyrie’s latest disc Man of Two Visions. We were initially turned on to this Virginia based outfit by our good friend Ray from Ray’s Realm. It wasn’t so much the fact that Ray expressed great delight with this band, but how he expressed it! With his words, he practically ran onto the tarmac of his nearest airport, raised a hand to stop the next oncoming jetliner, told the pilot the urgency of which he needed to show us in the Ripple offices his latest find, and spent a “frosty” 60 degree summer night curled up on the Ripple couch for his troubles. I’m tellin’ ya’ . . . wondrous things do happen within the blogosphere . . . just ask Ray.

So, after we packed Ray onto a return flight to his rightful family, we plopped Man of Two Visions into the CD player and let it play. It played from daybreak until night fall and then daybreak once again, thrilling us from its breakneck metallic opening through its Sabbath-y doomy center to its seven minute epic closer. The sounds we heard weren’t new . . . so many times Racer and I looked at each other silently asking where we’ve heard this part before. But, the band approached said riffs and melodies, and worked them into the context of the music in such a way that it had us raising our clenched fists into the smoke filled air to praise what our ears were witnessing.
“Running Out” rocks us in a Motorhead meets Iron Maiden fashion. Dual harmonized guitar licks meander through this raucously distorted and up tempo rocker, and teleports us to a time when a denim vest was worn as a suit of armor. The intro features some virtuosic moments from guitarists Jake and Pete Adams, all kept together by an outstanding rhythm section in Will Barry-Rec on bass and Warren Hawkins on drums. The fuzzed out guitar solo is a thing of beauty as it takes over the tune with some wonderfully timed hammer on’s, sweet full and half note bends, and amazingly expressive scale runs. Yeah . . . you could call this tune a clinic in guitar work. Even during the instrumental break midway through the tune, you’ll hear these great guitar flourishes, started by one guitar and met in mid run by the second. This is one of those songs that the more you listen to it, the more stuff seems to pop out and say, “Hey! Did you hear me do that nifty little thing that I did there?” 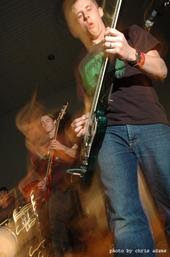 Valkyrie sludge it down a tempo or two with the grinding and doom laden “Dawntide’s Breeze.” Still packed with that guitar virtuosity of the first track, but this tune is filled with a ton more menace. Again, the harmonies are sterling and the guitar solo is off the charts. The first guitar comes in all technically shimmering, firing off notes with the precision of a snipers aim, and then the second guitar takes over and just bulldozes everything in its way with a mighty tone of fuzz. Not to be out done, pay close attention to drummer Hawkins as he adds some nicely timed cymbal crashes towards the end of the verse coming out of the guitar solo. Interestingly enough, as doom filled as the music comes across, the lyrics paint quite a different picture and are damn inspiring in their call to erase the hatred and darkness from our lives and replace the crap with love. Not what I expected, but a message that I can honestly get behind. What did y’all expect from me? I tend my own garden for food on my table. I’m a hippy. Get over it.
“Apocalypse Unsealed” and “False Dreams” are more in line with the gloom and doom, lyrically speaking. Heavy and grinding tunes that convey the message loud and clear, these tunes reflect the Sabbath influences like a full moon on a perfectly still lake. Dark imagery mixes well with soaring harmonized guitar leads, which give us the slight glimmer of hope that we need to keep from packing it in. “The Gorge” is the tune that took us by surprise, filling the offices with its acoustic brilliance, reminiscent of the acoustic driven tunes from Zeppelin III. The tune starts off as a pensive piece, lilting around the country pasture, creating an image of peacefulness and serenity. Eventually, the tune gains more tempo and drive, as the woodland creatures from around the pasture gather together in a midday fling and a short dance under a brilliant sun. Anyway, that’s the way I hear it . . . but there’s also a lot of smoke in the room.
The album comes to a close with the epic title track, “Man of Two Visions.” I absolutely love this song about a guy trying to find his way through life, trying to find that ever elusive happiness, trying to find peace of mind in a world that won’t have any of that nonsense. The verses plod along in all of their doomy splendor, but explode into a colorful display of notes as out new found guitar heroes attack the darkened beast of reality with their six string weapons of mass destruction. Tastefully executed guitar passages bring Iron Maiden to mind, as does the rhythm section for that matter, but there’s none of that virtuosic cockiness. Their approach seems to come more from a place of necessity than of pomp and self gratification.
The title of the album couldn’t describe the music any more precisely. This is music with two visions. One being of a stark and dark reality of government oppression, social slavery, and the world we hate so much coming to a sudden and drastic end. The flip side of the album is a message of hope, love, and making the most of the flawed beings that we are. The band has wrapped all of these feelings into loosely grooving, but precisely executed capsules of sound, that take the imagination on a trip for the ages. Man of Two Visions. Wow. Valkyrie has grabbed our attention (thanks again Ray . . . we’ll flip the drool stained pillow for the next guest.) - Pope JTE
www.myspace.com/valkyrie
www.thevalkyrierides.com
www.raysrealm.blogspot.com

Metal Mark said…
I have heard a couple of Roadsaw's albums. They are decent and somewhat like Fu Manchu and Nebula, but for me they just were not as groove oriented or as interesting as either of those two bands.
December 18, 2008 at 9:47 AM

The Ripple Effect said…
I'd never heard Roadsaw before their last album, so I don't know how they are, but give this one a try. The first two songs alone had more groove than an entire LP pressing factory! And as much as I like Fu Manchu, Roadsaw has better vocals, more soul and gruff to them.