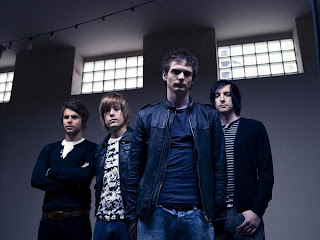 OK. So Air Traffic have been around a while now, but it's still surprising me how few people seem to have heard of them. So just in case you're one of them, here's a look at what you've been missing.

Air Traffic are Chris Wall, David Jordan, Jim Maddock and Tom Pritchard, four lads from Bournemouth who's debut album Fractured Life peaked at number 42 in the album chart and really should have caused much more of a stir than it did. Piano led, guitar driven indie rock, it's a heartfealt and energetic record that demands your attention. Think Coldplay with teeth and you're somewhere close. Expect a full review on my sister blog Winston Reviews soon.
If you still haven't heard them, and want to know what all the fuss is about, click the player below to listen to Shooting Star, a former number 1 on Xfm's music:response.


Air Traffic are on tour in January with shows across the country including a date at the prestigious Koko in London, and I for one hope to be there. If you want to catch the boys in your area check out their myspace for more details. While you're on myspace, take the time to listen to the frankly excellent Charlotte, which was released as a single for the second time in March. It's well worth three minutes of your time.
I was lucky enough to catch an impressively energetic set filmed for Channel 4 in an intimate North London venue a week or two ago, and beleive me, if you can get tickets I doubt you'll be disappointed. I've posted a few links below so you can swot up before the show.