Gojira - The Way of all Flesh 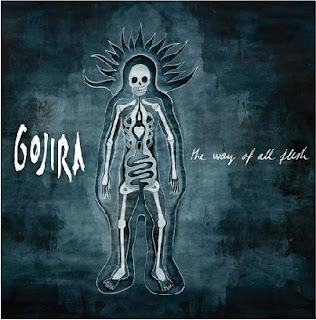 Hello and welcome aboard Ripple Airlines.

Today's destination is to the slightly freaking, incredibly brutal world of Gojira. On the way be sure to notice a satisfying dose of progressive experimentalism and straight ahead riffs and drumming to go along with your scenic landscape of pulverizing death metal.

Sit back, set your headrest, and buckle your seat belt tight and low across your lap as Gojira takes off in a hurry. As soon as the doors close, you'll notice a blasting, rolling guitar riff, more suggestive of their experimental tone than a standard death metal blast, but don't worry, by the second track you'll be heading directly into a maelstrom of brutality. Along the course of our flight, expect intermittent bouts of smooth flying, gentle acoustic strains, mixed with the more abundant passages of extreme turbulence, coming to you in the form of blistering hyperbeats and impenetrable walls of sound. You'll find this flight to be more experimental than a death metal band like Execration, but not as technical as Byzantine. It's a full-on pulverizing attack of the ears.

Our pilot today,Joe Duplantier, leads the Gojira flight through the skies of madness and despondency on guitar and vocals along with his co-pilot and brother, drummer Mario Duplantier. Please pardon our pilot's voice. Although his words are audible and he sings rather than grunts, he gargled with battery acid before the flight, assuring his voice to sound as tortured as possible.

Unexpected turns abound in our flight plan, like the tribal drumming intro to "The Art of Dying," the gangland meets world music vocal chanting of "Vacuity," and "A Sight to Behold," which can only be described as Death Metal Disco Electronica. And that's not a bad a thing. Who said you can't have a little groove in your metal?

Overall, we expect you to arrive safely at your destination, although not necessarily unharmed. Flying to Gojira is quite a trip. Some of the bumps and jolts along the flight path aren't necessarily satisfying, and overall, you may wish for the flight to be shorter, a bit easier on the ears, hoping for it to end long before we actually touch down. But in the end, you will land, satisfied and slightly more disturbed than before you departed.

A worthwhile, exhausting flight to try.