Roadsaw - See You in Hell 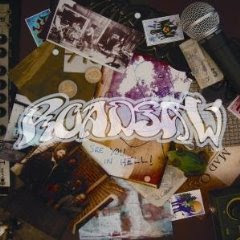 Ever have one of those days when everything just seems to go wrong? Nothing’s running on time, everyone’s getting on your nerves, all your technical equipment breaks, and traffic sucks the life out of you? Yeah, it was one of those days.

Grabbing the latest package from our favorite purveyors of maxed-out seventies-inspired heavy rock, I tore into the envelope with a vengeance. After my day in Hell, I found it quite fitting that the disc I slipped into the Ripple mobile CD player was this aptly titled ditty. And let me tell you right off, it hit the nail right on the fucking head.

See, when I’m pissed, when I got that energy that I just gotta burn off, I just gotta rock. But given a choice, I’ll leave the extreme metal, blast beats and death growls to my brethren the Pope. When I need to rock, I want my metal with big, massive riffs so meaty you could cut them with a steak knife. I want my bass line groovy and rough and rumbling with the ferocity of an 8.6 earthquake. I want my drums clean, with fills and rolls pounding like a defensive lineman attacking a quarterback. In short, I want Roadsaw. And thank all that’s holy, that’s what I got.

I’m going to kill the suspense right away with this one. The Pope and I have been asked by our good buddy rock over at Heavy Metal Addiction to join other music bloggers around the world and publish on Dec 27th our top 10 picks for heavy metal/hard rock albums of 2008. Roadsaw is going to be on that list. 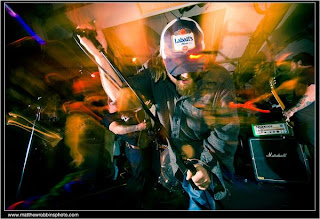 From the first tearing note of that first song “Who Do You Think You Are,” I knew I was in good hands with these guys. That note leads right into a massive single guitar riff, fuzzed up and maxed out to optimal effect. By the time the drum line blasts in with a rolling fill, I was gunning the gas pedal on the Ripple mobile, and when the bass blew in, filling out that monstrous bottom end, I was already pounding my fist against the steering wheel in a cathartic rage. This is huge seventies inspired rock with enough of a debt to Metallica to make them relevant today.

Riggs quickly became one of my favorite vocalists of the year, infusing the song with a soulful voice, rough with texture, deep in tone, yet melodic enough to carry the song throw the inherent melody and still powerful enough to hit the highs when necessary. This is the kind of voice I could get into, pained and real. Don’t give me power metal operatic histrionics when I'm pissed, give me a voice that’s been through the depths of hell and dragged itself back again. That’s what it takes to release my inner demons.

As “Who Do You Think You Are,” snapped to a close, I was on the open road, feeling slightly better, but still retaining the memory of my crappy day like a fungus clinging to my cortex. I needed more. As if to answer the needs of my fired-up reptilian brain, “Look Pretty Lonely,” rumbled out on the back of a surging drum fill before launching into a rumbling riff, charging at me with the force of a herd of wildebeest fleeing a hungry predator. Riggs's voice reached new heights of emotion, wailing over the stuttering guitar, again bringing to life the killer melody that forms the backbone of the song. Following a swirling, fuzzed out guitar bridge, the boys launch right into the chorus, full of angst and dark emotion. Don’t categorize this as stoner rock, it’s way more fierce than that label implies, yet still rooted in it’s seventies heritage. God bless it, if this isn’t as near perfect a heavy track as I’ve heard all year.

“Go it Alone,” brings out some more obvious influences, in all the best ways. A touch of fuzzed-out Fu Manchu, a trace of Aerosmith. A chugging Nugent riff. A melody most bands would die for. Plowing down the interstate with this baby blaring, the cold wind blowing against my long-ago shaved scalp, life slowly began to fall back into perspective, me pounding the shit out of my steering wheel, singing in time to the vocal hook even though I’d never heard it before. Instantly familiar, yet totally new. In a perfect world, this track, and for that matter every track, would be a mainstay of FM radio. 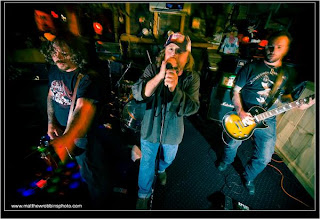 “The Rules,” takes these influences a step further, bringing in a gigantic bluesy, Aerosmith mid-tempo number. Listen for that bellowing bass, mining the depths below the raging dual guitar riffs. Hear it plowing the earth underneath the maximally fuzzed solo. Feel it dig into your skin and suck the venom right out of your veins. Then, just after “Up to You,” treks down a similar trail, “Dead Horse,” gallops out of the corral letting you know these aren’t one trick ponies. Riding a strummed acoustic, the song is steeped in heavy atmospherics underlying the once again killer melody, so steeped in melancholy it carries all the pathos of a Greek tragedy married to the songwriting worthy of a chamber quartet. Echoing guitars shimmer over Riggs, who finds a whole new plateau for his voice, smoothing it out to the point of true beauty.

But don’t worry, the guys haven’t gone soft. While “Dead Horse,” gave me a brief moment to catch my breath, “Leavin’” brings the rock back in the form of a mid-tempo bluesy number before “It’s Your Move,” launches back into the riff pounding hard rock. By this time, I’ve arrived at my destination, sweat dripping down my temples, my fists reddened and bruised from the repeated pounding against the wheel, my left foot sore from keeping time with the bass drum. As the searing guitar lead tore out of my speakers, followed by the final neo-psychedelic calm down of “”Receive,” swirling in my ears, I turned off the engine, thoroughly spent and completely satisfied.

If the goal of music is to impart the emotion of the band onto the listener, sharing a catharsis of band and audience alike, then there’s no way to describe this disc but an out and out success. And the most amazing thing to me is that with all the emotion these guys plow into me, the anger and passion, it’s all tempered with the most God-damned perfectly singable melodies you’ll find in any heavy rock album anywhere. You’d have to be a fucking zombie not to find a visceral connection with at least one track on this disc.

Or as the boys say themselves, “You call me dark. Well, I like the view.” So do I, my brothers, so do I.

Buy here: See You in Hell!

Forgot to tell you that you rippled me on this muther. Got it a few weeks ago. Kicks ass.