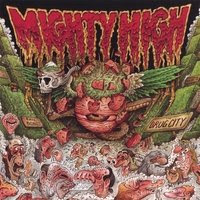 In this time of world-wide chaos, war and general, all-around nastiness, The Pope and I would like to take a moment to wish you and yours a very happy and peaceful Christmas, Hanukah or Kwanza. Perhaps for 2009, calmer heads will prevail and we'll all learn that we're just inhabitants of this one little orbiting rock called earth. A wise man once said, "every problem in this world could be solved instantly if we could only agree." Forget that, I'm just in favor of us allowing each other the privilege to agree to disagree. We don't all need to see the world the same, just peacefully.

So in that spirit of brotherhood, world peace and love, we're offering to you a free gift of a balls out, scuzzy slab of fuzzed-out, punked-up, high-as-a-fucking-kite, stoner rock. Now if that doesn't say brotherhood to all races and religions, I don't know what does.

Mighty High blast out an adrenaline rush of riff-crazed, stoner madness with the elegance of a charging rhino in heat visiting the woman's club. We're talking sleazy burst of gutsy rock like, "Breakin Shit," "Drug City," and "Stone Gett-off." Our main man Woody and his fried companions of chaos, attack their gits, drums and bass like they've had one too many hits of the adrenaline bong, and damn, if that isn't a good thing.

So, in the interest of world peace, we urge you to jump all over this baby. If we all followed the boys philosophy of "I live to Get High," we just might all be a little to lazy to wage war.

Thanks to the Mighty High boys for this X-mas offering and happy holidays to you all.

Anonymous said…
I enjoy drinking Ripple wine while reading this blog. Thanks for your support and stay high in 09.
December 27, 2008 at 7:22 AM