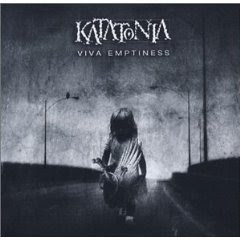 In recent months, I’ve been inundated with new music that, in most cases is pretty damn good, but has kept me from one of the main reasons Racer and I started this mad cap Ripple world in the first place. The main reason we kicked this thing into high gear last year was so that we could tell all who were interested about all this great music that has been grossly underappreciated and overlooked by the mass media. So, at the risk of raising the ire of those who have kept our offices in an almost constant chaotic clutter of shining silver music capsules and so much paper product that we can hear Al Gore crying in the distance, I’ve chosen to go back a few years and tell y’all about an album that’s spent an unprecedented amount of time living in my CD player. That album, as you may have guessed, is Katatonia’s Viva Emptiness.

In 2003, while I was visiting Racer and piggy backing that with a chance to catch Iron Maiden for the one trillionth time, we pulled our usual shenanigans and spent an inordinate amount of time rustling through the bargain bins in a nearby Rasputin’s record store. Earlier in the morning, I had read in one of the metal mags that littered Racer’s abode that Katatonia’s new album was a must have and their masterpiece. Being in the hunt for something fresh I decided, why not? I’ll give this bad boy a try. I remember putting it on somewhere in between Enslaved’s Below the Lights and one of the Kataklysm albums. Truth be told . . . I didn’t remember much about Viva Emptiness. What happened after that, though, is that once I got home and got comfy in the confines of my own lair, the breadth and wonder of Katatonia’s truly epic masterpiece unfolded before my ears.

Expecting something seething in menace and abrasive as 30 grit sandpaper, I was almost shocked at the multi-layered, multi-dimensional musical opus that rattled around in my eardrums. I didn’t get the walls of sonic uber-noise or ab straining riff mongering that is so prevalent in metal. Instead, I got a dark and moody tapestry of melodically rich music that frightened me on a psychological level rather than on a physical one. Clean toned guitars outweigh the distorted variety. Off time drum patterns replace the standard 4/4 time. Tortured vocals that cry for our sympathy cancelled out the guttural utterances of traditional death metal. Viva Emptiness completely broke the mold of the death metal that I was so used to hearing, and Katatonia shattered any preconceived notion that I had of what haunting music is all about.

Like most of the songs on the album, “Ghost of the Sun” features a multitude of guitar textures, ranging from distorted walls of angst to clean arpeggio’s slowly building to create layers of tension to wah pedals being stomped as if a line of ants were making their way across the floor to abscond with the bands picnic basket. Unlike most extreme metal, Katatonia don’t fall into the clichés of the various genres and steer away from the blast beat tempos. Rather, they rely on the drums to keep the beat, though oft times with unorthodox patterns, and add fills to flourish the sound. And, mixed with melodic vocals rather than demonic growls of torment, the sounds swirl and twist, and ultimately create a haunting vibe of melancholy. This sound really steps to the forefront as the last strains of “Ghost of the Sun” fade away and “Sleeper” kicks in. A cleaned toned guitar strums out the rhythm while an eerie synthesizer howls in the background. The vocals drop in, haunting and morose, crooning their way over the chorus laden guitars, building a chilly vibe that will undoubtedly have you reaching for a sweater. Then the clean tones disappear and are immediately replaced with distorted walls of guitars, showing that the band can still rock as hard as they did in the old days. The lyrics paint pictures of sepia toned backgrounds with thin drapes blowing softly in the draft from a cracked window. A man standing just out of sight, hidden by shadow, a soft breath exhaled, the smell of ozone. Fucking creepy, man!
“Criminals” is another amazing piece of mood. The lyrics, again, let the imagination go fucking crazy! One can only imagine that the subject matter is real because it feels so damned honest. Jonas Renske does a superb job of conveying the emotion and the torture in this one. The pained melody is howled over a rolling bass line through the verses and the raucously distorted choruses. In time, you too will be singing along with Jonas because you won’t be able to help yourself. Note the venom in his tone as he spits out the phrase, “That fucker,” in the chorus. That has to be real, folks. No one can ape that much passion. I don’t care if you’re the best actor in the world, it doesn’t get more real than that!

“Burn the Remembrance,” “ One Year From Now,” and “Complicity” all carry strong grooves, creepy and haunting melodies, and off kilter dynamics that make them stand out, but it’s “Evidence” that brings it home every time. Strategically placed towards the end of the album, it’s this tune that acts as the peak of the mountain while the rest of the tunes were the steps getting us there. Opening with guitars run through some heavy effects, the tune begins to groove with the introduction of the rhythm section. Jonas Renske’s voice is spot on perfect with intonation and passion. I can’t tell you what the song is about, but the lyrics are pure poetry, and completely open to interpretation. But what makes this song soar to the heavens is the melody. As the song launches into the chorus, that wall of distorted guitar returns, and the vocal melody creates a counterpoint of beauty that elevates the soul with hope and inspiration.
It was fun going back and listening to this album. I mean, really dissecting it from top to bottom. I’ve listened to Viva Emptiness ad nauseum and love it on a primal level. Going back and trying to justify to myself, and all you Waveriders of course, actually made me appreciate this dark, melodious epic in a whole different way. Before it was just about the melodies and the dark imagery, but now it’s about this nebulous, shape shifting musical entity that takes on a new form with every subsequent listen. The interpretations of the poetic lyrics can change with the mood of the listener. Fascinating! An album that changes every time it’s listened to . . . man, think of the possibilities! In theory, one might never tire of a piece of music again. Yeah . . . it’s a stretch, but I leave y’all to ponder that possibility for awhile. - Pope JTE

Amazing cd. Amazing band. I've been listening to this cd a lot lately myself...along with Last Fair Deal Gone Down and The Great Cold Distance...

Excellent job on this review. I couldn't agree more.

Zen - Thank you so much for the comment. I appreciate you taking the time to read the entire piece. I don't feel that your stand length review can honestly capture the depth of this album, no matter how good a writer on is.

I also agree that LFDGD and TGCD are fabulous albums, and in due time, will get written about in these pages.

Thanks for reminding me how good these guys are>
All I'd listened too was The Great Cold Distance up to now, but this is great stuff too>
Check out a band called Gazpacho I think you'll like what you hear.