Sometimes, you just get surprised.


So it was when I first dropped these two platters onto the Ripple stereo. My jaw dropped open, my cheeks flushed, my eyes may have even watered, I don't know, I wasn't looking. What I do know is that I was blown away. In fact, these discs crushed my cerebellum so hard, I broke our own rules and put both into rotation on the Ripple Radio Show before either of these reviews were actually published. I know, I know, bad boy, but I'll tell you, our waverider listeners were all the happier I did.


If you haven't checked out the Ripple Radio, hit the blogtalkradio link over there to the right. Find the show labeled Crust, and you'll hear both these bands. But be prepared. You too may be blown away. 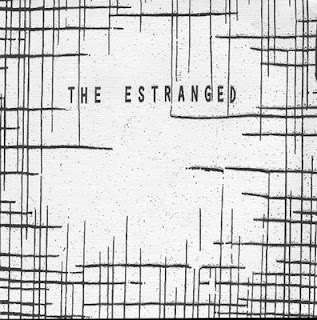 The debut 7” single from a trio of former Remains of the Day, Hellshock and From Ashes Rise and Warcry members, The Estranged is debut is a two-song blast of agitated post-punk. Brimming with energy and dynamics, The Estranged have crafted two songs of mean, aggressive, discordant and utterly captivating choppiness. Comparisons to Joy Division, Mission of Burma and The Wipers will flow over these guys like rain from the critics, but I also hear some of the best of the rockier side of post-punk, like New Model Army, later T.S.O.L. and even a little Gang of Four.

“Fast Train,” starts of with a gripping bass line before the angular guitar cuts in, tearing through the mix like a surgeon’s scalpel heading towards flesh. The vocals are rough and raw, full of texture, working perfectly with the music to add that menacing edge. This isn’t passive, depressive post-punk doom like Joy Division, this is charging, in-your-face angst, and if that kinda thing is your bag, you’ll find this song instantly infectious. You don’t even have to dress in black to like this baby.

“The Masses,” follows plowing a similar bass-thudding, choppy guitar vibe, perhaps holding on to a touch more of the genre’s long-past punk origins. Yes, this is post-punk that rocks. Both tracks are incredibly solid, near pop like in their composition, and instantly made the leap from CD to the active playlist on my ipod. I’ll listen to these puppies over and over dreaming of the day when bands like The Wipers and Wire were new and being thankful that The Estranged remembers those days too. My only criticism is that it’s only two songs, stopping when it should be taking off. But I’ll accept it as an appetizer. Can’t wait to see what they come up with on a full LP. 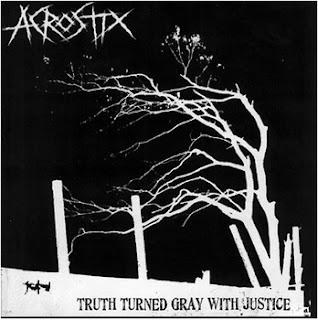 Japanese crustcore freaks, Acrostix come roaring back with a blistering 7” 3-song attack of hardcore Antisect, Deviated Instinct, Crow and Amebix inspired punk frenzy. Having previously released their slabs of anger on Crust War and Whisper in Darkness records, this is their first platter for Black Water Records and it’s an amazing schizophrenic blend of riffs, madness and (?) jazz.

“Thrash Em All,” blasts this disc off with an instrumental punk/thrash attack (ignoring the five our six words screamed at the end.) Now if the thought of a punk instrumental sounds about as much fun as root canal without anesthesia, don’t judge too quickly. These guys pack enough crunching riffs, wailing guitar runs, time changes and drums on lithium to keep this one interesting to the end. “Killing Frost,” roars out next a pummeling assault of tortuous riffs, tempestuous vocals and a team gang-shouted chorus (I ran outta “T’s” there). The whole song moves at warp 9, just a full-on warzone of riffing maniac punk.

Then comes “Iron Bird,” and suddenly, everything goes down the rabbit whole in a swirling funnel of Thorazine and Haldol. Starting off with a beautiful (yes, I said beautiful) jazzy bass and drum intro, mining a mellow, mid-tempo groove, the sax layers in, deep and soulful, followed by the picking of the guitar. Then-- is that a trumpet? Yes, damn, it is, bring in a near flamenco vibe, before all hell breaks loose in a fleeting, pounding millisecond of punk/thrash terror. But, here’s the gig. Even with the guitar riffing like a freaking charging bull, the drums pounding on anything within arms reach of the drummer, the vocals screaming out some distorted rant about something, the horns remain, soaring in the background, elevating the song to the sublime. A trumpet. Some sax. A nasty guitar riff. A trumpet solo? When’s the last time you heard a freakin’ trumpet solo in your crust?

Don’t know if these guys are absolutely brilliant or freaking mentally insane, but I love it either way. A true epic punk/thrash/jazz classic. God bless insanity.