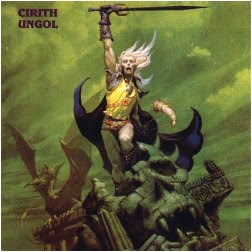 Here at the Ripple, we're open to all sorts of music. In fact sometimes, we welcome the odd, the bizarre, the not quite-operating on all cylinders, because we relish the creativity those twisted geniuses bring to their muse.

Freakishly surreal epic fantasy metal, more indebted to the then raging NWOBHM scene than people give them credit for, Cirith Ungol were an anomaly in the LA metal scene. In 1980 they released this minimally produced spasm of wild, where-are-they-going-next metal on their own label and a cult legend was born. Topped by the guitar work of Jerry Fogle and the out of his skull bass antics of Michael Flint, Cirith Ungol are a missing link between early Rush sword and sorcery metal and the future Doom metal of Celtic Frost. Singer Tim Baker definitely has a love-it-or-hate-it delivery, high pitched and screechy, lyrics spit out in a semi-sing/speak tone, he sounds like a cross between Geddy Lee and a death metal vocalist. Either that or Rob Halford with the world’s worst case of strep throat.

Repeated listens may be necessary to get into the album, but once you get used to, or past the vocals, the bizarre worlds of Cirith Ungol unfolds before you like some epic sci-fi paperback novel. In fact, the album holds up well upon repeated listens, each spin opening the door to their magic cave of madness just a little bit more. To get an idea of where these guys came from, they took their name from Tolkein’s Lord of the Rings, where it means “,” which was high in the mountains above Mordor where the monster Shelob lived. The artwork all came from Elric book covers, and the music came from some hidden area in Hades that few have ever dared to enter. 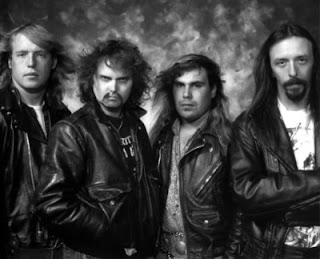 Starting off with “Frost and Fire’s” ascending guitar riff, the boys launch headlong into their musical assault, broadswords and shields at the ready, war axes held high, as they take on whatever crazed mythical beasts, demons and wizards obstruct their path. Searing guitar work and the first hint that Michael Flint had eighteen fingers on his bass at all times propel this swirling maelstrom of God-hungry metal forward. Ever forward, towards the ale and Meade houses of some frozen Asgardian land. “I’m Alive,” hints at the epic doom vibe the boys would mine in their future albums while “A Little Fire,” rocks with the backwards swagger of ‘70’s metal sucked up into some insane tornado and dropped off in the thick of the Forests of Sherwood. Nice guitar work. Really, searing leads throughout the whole album.

“What Does it Takes,” begins with a straight ahead NWOBHM riff before some totally bizarre swirling synthesizer stabs in sounding more out of place than Brittany Spears at a mime convention. Try to ignore that outdated sound, though because the rest of the song brings on some good riffing and bass slapping. “Edge of a Knife,” and “Better off Dead,” pick up the pace, with “Better,” leaping out of the starting gate on the back of some seriously funky bass not readily found on a early eighties metal album. “Maybe That’s Why,” finishes the platter off with a mournful bleeding guitar-based instrumental, like the last warrior falling to his death during the final conquest of an elfin compound.

In the end, there’s no doubt that Cirith Ungol had created a classic underground masterpiece of wacky fantasy metal. Despite 28 years having passed, the album still holds up well today, a forerunner of doom and epic metal, a forefather of Viking metal and a strange, out of left field classic of sci-fi metal.

Metal Mark said…
This is a great album. I am hesitant to say that Cirith Ungol were influenced by the NWOBHM scene. It's more like they shared a lot of the same influences such as Sabbath,Pentagram, Budgie, Rush and Priest. They were doing this sound before some NWOBHM bands and doing it better.
December 10, 2008 at 4:15 AM

Dimaension X said…
The vocals were definitely difficult to get used to, but these guys were way ahead of their time - very talented and unusual, a unique sound.
December 11, 2008 at 2:58 PM

Psalmysteria said…
Excellent album! I 'discovered' Cirith Ungol back in 1982 thru an independent Metal rag that had a review of a live show they did, and there was also a picture of their album cover, which happened to be the same as the cover of one of my favorite books!

So being really into Sword & Sorcery stuff, I naturally HAD to have it. This album showed - and still shows - great potential. But their 2nd album, KING OF THE DEAD... Oh ho! Damn what an album!!! Its impact is truly lasting on those who came in contact with its mighty power!

And ya know what? Tim Baker's vocals mighta been far-fetched back then, but think of them as a little heavier NAZARETH... I hear it, anyway... But NOWADAYS, I would almost say he is like the Godfather of some of this screamo vocal stuff... lol...

The Ripple Effect said…
Psalmysteria, Thanks for the whole-hearted Sword and Sorcery comment. I'm a big Robert Howard fan myself.

I've never heard Cirith's second album, but it sounds great. If you ever feel like writing that up for the Ripple and sharing your love with the waveriders, just let me know!
November 4, 2009 at 9:03 AM