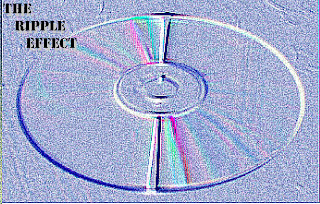 Since year end lists seem to be the thing to do, and since we've been asked by our good buddy over at Heavy Metal Addiction to see what we could come up with, The Pope and I rummaged through all the heaping slabs of steaming metal and hard rock that Postman Sal had slumped through our office doors this year. Now, since we at the Ripple do things a little differently, focusing on the "Best Music You're Not Listening to," our year end list may look a little different than others. You'll find no Metallica, Motorhead or AC/DC on this list, even though those bands put out some fine releases. Truth be told, those guys don't need us propping up their sound anyways. But give us a group of guys (or girls) pounding it out when the odds are stacked against them, bills are due and the basement is leaking, well, that's our kinda band.

With that all in mind, the choosing was still really hard. We were forced to eliminate some definite favorites for lack of room or not fitting in with the genre (like Ernie Halter, Attack! Attack!, Vanessa Kafka or Amy MacDonald), but here it is, without further ado, the Ripple best of heavy metal/hard rock list of 2008. Just click on the band name to read the review. Argue at your will.

East of the Wall - Farmer's Almanac

Roadsaw - See You in Hell

Brain Police - Beyond the wasteland

Ogre - Plague of the Planet


There you have it. The best metal/hard rock you're not listening to. Below, find a list of all the other great sites involved in this fun year end project. Check em all out, agree, disagree, argue and comment. It's all good.

Peace and joy for the New Year!

Lets see I have one in common with the Pope (Byzantine) and three with
Racer (Ogre, Big Elf and Dead Man). Plus Bible of the devil was a definite consideration that just missed out on making my list.

Love it guys! A special thanks to Racer for turning me on to Big Elf and giving me a copy :)

I skipped the Opeth & Byzantine albums and the Bigelf album is sitting in a pile on my desk still wrapped. just like I did at Bob Vinyl's list, i will have to start searching Google for all these albums and hear if i like some.

Pope - there must be a mistake. I don't see POPULATION REDUCTION on your list....

Pooch - As much as I wanted to include Population Reduction in this list, I just couldn't find it in my heart to lead anyone on. Though the album with the babies crying had a toe in . . . just ahead of the kids who recorded themselves retching.

Everyone seems to have Big Elf on their list. It's time for me to check them out.