The Clash - Live at Shea Stadium 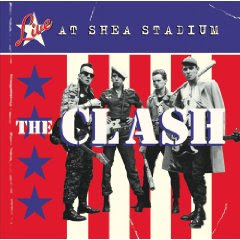 Sometimes, the fans take over and help to create the band. Letters scrawled on a blank wall, word of mouth praise whispered through dirty basement clubs, can bring a band more notoriety than a thousand PR folks could ever pray to create. And every once in a while, one of those fan created slogans becomes legendary.

This brand-spanking new release of the legendary Shea stadium shows the Clash played for two nights in support of the 1982 Who farewell tour, finds the band at their commercial, if not their musical, peak, fresh off the massive across the board success of Combat Rock. For years, rumors had leaked out that these tapes existed, with a few tracks leaking out here and there, but it wasn't until the tapes were unearthed by Strummer during a move that the full power of this live recording came to life. And no matter how you slice it Live at Shea Stadium is a triumph, a fascinating historical and musical document.

Rather than riding high on their new found success, the band was in the midst of falling apart. Drummer Topper Headon had just been kicked out for his descent into heroin addiction, replaced by original drummer Terry Chimes. Within months, the band had reached full implosion, both Chimes and Mick Jones leaving for friendlier pastures. So what does a punk band, more accustomed to playing small theaters and arenas, sound like, on the verge of self-destruction and playing warm-up for one of the all-time classic bands of rock and roll, in front of 72,000 of the Who's screaming fans? 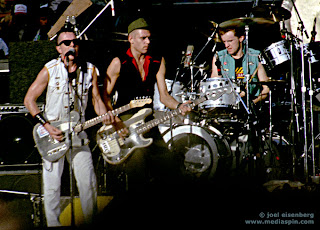 Rather than being intimidated by the setting the Clash seemed to have sublimated that energy, pumping out a performance just bristling with energy and punk attitude. From the first guitar chord of opener "London Calling," to the final resounding echo of "I Fought the Law," Live at Shea Stadium captures a band who were dead determined to blast the shit out of the audience and take no prisoners in the process. Opening for the Who or not, Strummer didn't care. With the band's introduction still fading into the rainy New York night, the mohawked Strummer grabs the mic and barks out "Welcome to the Casbah Club!" his declaration that the fans may have come for the Who, but damn it, they were getting the Clash first. In retrospect, it seems he didn't have to worry about that, as the raving cheers from the audience confirm what the New York Post had reported, that "there were as many Clash fans on those nights as Who fans." Still, the Clash weren't going to take any chances and went on to pound "London Calling," through the sound system with all the passion and raving energy of an invading army, stomping on the Who's sacred ground. Strummer's voice was in fine form as he screamed out for his generation to take up the rebellion.

"Police On my Back," rages out next, met with a sweeping ovation from the crowd. Brimming with pure punk energy and abandon, this is probably the definitive Clash version of the song, fierce, choppy and furiously pounding. And from there, the set never lets up, unleashing a hurricane of energy to combat the pouring rain. Old classics or new songs off the Combat Rock disc are each belted out with passion and fury. "The Guns of Brixton," pounds at a faster clip, sounding more urgent than on the London Calling album and is followed by the full-on punk assault of "Tommy Gun."

High octane permeates the entire disc, most of the songs rocking with a fiercer abandon than heard before, particularly "Rock the Casbah." Stripped of its piano intro, the boys play it as a flat-out raver, raw, infusing it with a punkish energy that's mostly lost on the studio version. The same could be said of the standard, "Train in Vain," sounding somewhat harder edged when blasted through the Shea crowd. All of which leads into my favorite track on the disc, the fully energized version of "Clampdown." Long one of the Clash's best songs, it positively rages here, roaring in protest and anger. If one song could ever be said to best epitomize the Clash sound and message, this is it. And I defy anyone to find fault with this live version. 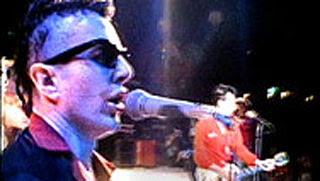 Each performance is tight and strong, from Strummer's raving vocals to Jones's slashing chords and Simonon's throbbing bass. Throughout the show, Terry Chimes does an admirable job of stepping into the drum stool, moving from the punk classics of "Career Opportunities," the pop rock of "Spanish Bombs," or transitioning from the speeded-up funk of "The Magnificent Seven," right into the dub of "Armagideon Time," and back again flawlessly. And through it all, Strummer proves to be a nervy showman, both basking in and needling the 72,000 people in front of him. At one point during a breakdown in "Police on My Back," he admonishes the audience to "Stop talking in the back. It's too loud and putting us off the song now. We're trying to concentrate, so stop yakking!" Later, during the opening of "Guns of Brixton," fully aware that many of the Who's fans may have no idea who these young punk rockers were or what their music was about he barks out, "Mr. Paul Simonon is going to bring you, walking in the "Guns of Brixton." Yeah, ask your neighbor what it's about!"

"I Fought the Law," rocks with all the energy you'd expect, this performance being the one filmed and captured for the song's video, leading right into the furious ender "I Fought the Law." By this time, I can only imagine 72,000 people pogo-ing in unison, Who fans trying desperately to remember who they'd come to see that night.

I don't know what the whole tour was like that year, rumours have it that it teetered on disaster. But for that night, the Clash held it together. A breathless, triumphant performance by a band determined to take the stage that night, ignore the rain and rock the crap out of the place. Opening band or not, no quarter was given. No mercy for the elder statesmen who had to follow and try and match the young punks energy. No, on that night, there's no disputing, the Clash were the only band that mattered.

I reviewed this too.

I LOVE The Clash. Great post. I think I am suppose to get this to review but its not here yet....If so I am linking here, you said it all and said it well.