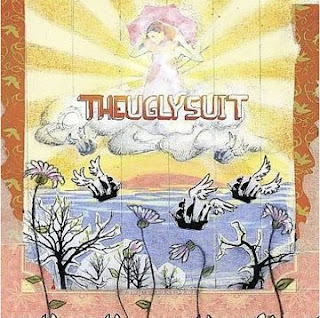 You just can't judge a book by its cover.

Or in this case, you can't judge the beauty of music by the band's name.

Personally, I don't have any idea what an uglysuit is and I really don't want to know (unless these guys are referring to what they see when they peep in on me as I get out of the shower!) but it's been a long time since I've come across a band with such a discord between its name and its sound.

Rather than being ugly, The Uglysuit craft some breathtakingly beautiful, shimmering, sunshine infused indy pop. Coming from the Midwest, these six friends fuse their obvious influences into a swirling brand of near-psychedelia, shoegazing, infectious pop, with enough exploration down mathrock time changes, near ambient passages, extended jams, and discordant noise rock to never be swallowed in feyness. Bringing in the delicate vocal intricacies of the Shins, the instrumentation exploration of the Decemberists with a nod towards My Morning Jacket and even a wayward wink back to the Velvet Underground, their music at time reaches the sublime. Even if their name is all wrong.

The Uglysuit unfolds at a languid, leisurely pace, piano often near the forefront, as the songs meander down the twisting lane of some sunny, yet slightly melancholy place. These guys are in no hurry to get any where, and they're perfectly content to have you wandering along beside them. Earlier, I'd written about music to listen to as the seasons change, a nod towards leaving the carefree days of summer behind and welcoming of the complexities of autumn. The Uglysuit fits there, right next to Shuteye Unison. Music that, despite it's sunny exterior, makes me want to wrap myself up in a thick sweater, go for a walk through the fallen leaves, then grab a steaming cup of joe and plop myself down in front of the fire. It's not that the music is cold. It certainly isn't. In fact The Uglysuit has a deep warmth that emanates through it's constantly changing musical veins. But there is a certain melancholy there, a certain meditative quality in the lush piano and guitar, the gentle vocals, the shimmering production, that just makes me want to hunker down with my dog and wait for winter to come.

"Brownblue's Passing," starts us off on a pastoral journey, high flying through the clouds, floating through the sky, watching the hilltops passing below. Organ and guitar blend effortlessly, while Israel Hindman's breathy vocals invoke the fading of the warm summer days. Shades of Pink Floyd, or some other lost British '70's prog band reverberate. Midway through the song breaks down into a time-change leading to a stuttering, near mantra-like passage, a meditative jam, before changing again to a more complex signature. Time changes like this abound throughout the album, leaving the listener always wondering where the band plans on going next, meandering at times, but never unsettling.

"Chicago," the first single, is a beautiful moment of alt-pop, gorgeous in melody, as the boys play a tale of the Windy City. Following the sparse intro, the soaring chorus raises in a swirling wall of piano and layered guitar, with a near perfect vocal hook and performance. When Israel sings that the "temperature has dropped to a stunning three degrees," you can almost feel the chill in the air. Through the shimmering guitar, even when the song ascends to its most angelic, a hint of melancholy remains. The same melancholy that infuses the whole album. Kind of a sparse, Americana meets the alt-indy world vibe, which is probably reflective of the six band members hometown of Oklahoma City.

"Brad's House," builds on this tone, a spartan, piano-led song that comes at you like a lost memory, a day gone by, a passing moment of the innocence of youth. Near ambient in its composition, with subtle Beatle-esque influences in the breakdowns. This is a haunting track, with a subtle aching pain of days gone by, told in the first half with near-whispered voice and solo piano. ". . . And We Became Sunshine," is one of two extended 7 minute mini-epics (all the songs, save "Chicago" clock in at over 4 minutes). Shimmering guitar lends a soft R.E.M. tone, as the boys explore through different moods and textures, from a blissful drone at times growing to massive walls of distorted noise by the songs end, swooping the listener up like it's one massive cathartic release. Loud, dissonant, but not ugly!

While a few of the diversions turn out to be cul-de-sacs, overall the Uglysuit has created a dreamy yet somber work of delicate beauty and sonic depth. As a debut, given that these guys are all in their young twenties, its a stunner. Give them time to grow and progress, let them hang out and jam together, rummaging through their past, digging into their future, and there's no telling how achingly lovely a disc they'll turn out next. Forget the emo-punk sounding name, The Uglysuit is certainly a band worth watching, now and for the future.

The Ripple Effect said…
Thanks, Clemente. Coming from you, that's high praise for the guys, as you certainly know your way around a melody!

Anonymous said…
Great review of a splendid record. I have really enjoyed checking out their tunes, thanks for the suggestion. It's definitely the kind of music you can get lost in.
October 1, 2008 at 12:58 PM