Ok, waveriders, we've got a new and special treat for you. To expand the musical horizons of what we know and love, and to add a decidedly British flavor to the music we ripple, we're starting a new feature courtesy of British music blogger extraordinarie Winston. Check him out at Winston's Zen to get the full flavor of all that this maniac culls from the U.K. music scene, but each Tuesday, we'll be running a featured Winston's Zen review, bringing you the word on a new, undiscovered, up-and-coming U.K. band that you need to keep your eyes open for. Called Tuesday's Zen, come back and check often to see what the Zenster discovers next.

To start things off from Winston, welcome to Four Dead in Ohio 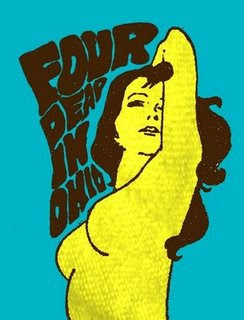 Named after lyrics taken from Neil Young’s Ohio, (a beatnik dirge to four students whose lives ended at the hands of the US National Guard at Kent State University in 1970), the band played it’s very first gig as support to the Ravonettes, and their breath-taking, custom-lit stage show impressed enough to score a repeat performance with the Danish legends as well as bookings alongside the likes of Ladytron and Cage The Elephant.

Based in London, and signed to new indie outfit Yoyo Acapulco, Four Dead In Ohio take the sound of their contemporary influences (see The Verve, Kings Of Leon, and Black Rebel Motorcycle Club) and bathe it in the psychedelic waters of 60’s heroes like Dylan and The Doors to create a deeply reverberating bluesy-rock, that has already attracted attention from Radio 1’s Steve Lamacq when their track Utah found it’s way onto his ‘In New Music We Trust’ slot. I wouldn’t be at all surprised if big things beckon for this lot.

Four Dead In Ohio release their brilliant debut single Jesus Won’t Dance in My High Heels as a digital download and limited edition double A-side with Southern Man on September 1st and the guys are currently playing sets all over the country. Winston’s Zen hopes to catch them at the Dublin Castle, Camden Town on August 26th. Check their MySpace for a date near YOU.

In the meantime check out the video for Slow Train Blues below and let me know what you think.