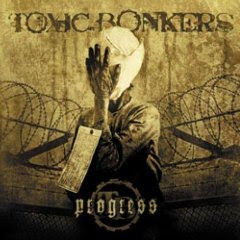 Waveriders. Y’all know my feelings on metal by now, don’t you? If you’ve been following along for the last year, then you should have a pretty good idea that when it comes to metal, the music better grab my attention, be filled with dynamic elements to keep it from being trite, it should be played with heart, soul, and integrity, and it must kick my ass! Simple rules to follow. Poland’s Toxic Bonkers must have a list of my rules in their jam area, coz’ they’ve conveniently met all of my criteria for their latest album, Progress.

Progress is exactly what I needed at exactly the right time. Hard edged and aggressive, dynamic, groove oriented extreme metal. Yeah baby . . . that’s a mouthful, and Toxic Bonkers gives you an earful. Check it out . . . the album kicks off with “Emptiness” an absolute barrage of sound. Every instrument explodes in your face, and then the brilliance hits you as the chaos subsides, and we’re left marveling at one of those wonderfully beautiful chugga-chugga riffs with accents crashing all around it. The band then drop into a tight ass groove that got me doing crunches without realizing it. Okay . . . this got my attention! Between the intensely heavy groove, the seemingly instant time changes, and the vocalists death metal growl to black metal screech, my ears were certainly captivated by a band equally, if not more, fierce that the all mighty Bolt Thrower. Meandering guitar work through the groove adds a nice element of melody and class to such a menacing tune.
Just as you’re catching your breath between tracks, “Evolution” jumps down your throat with fists a swingin’! The tune starts off with some serious hardcore intensity, but the band throw their special blend of metal sensibility throughout the tune. The double bass drums are enough to give the listener a concussion, but mixed with that uber-aggressive cocktail of devastation, there’s this subtle musicianship that keeps me coming back. There are great dynamic shifts of energy on this one! Check the break towards the middle of the tune where the band drops out of the mix, leaving just the bass to carry the groove. Excellent change of pace to keep this track from being a one dimensional beat down.

“Hole in the Head” is a groove fest! There must be three or four different riffs in this tune that get the body moving. The vocals are equal in intensity, shifting from guttural barks to a venom spitting shriek, and help drive this tune to the top of my playlist. One gets the sense that these guys are for real and they’re upset about the world around them. Understandably so. The world has never been all that kind to Poland for some odd reason. The Nazi’s invaded it. The Russians cut them off from the rest of the free world. They’ve been the punch line to many a joke. Wouldn’t you be pissed too? Toxic Bonkers transfers that anger into a fine set of tunes that drip with integrity. The guitars add a great texture both at the solo break and towards the end of the tune. At the end of the tune, they incorporate a bit of ambient texture with some keyboards that suddenly disappear and are replaced with the full on flurry of “Face the Facts,” which may be the most complex tune from a musical standpoint. The tune features some stellar guitar work and drumming that’s out of this world. Keep an ear out for the breakdown where they completely grind this thing into the ground. Fucking fabulous!
The title track shows the band expanding their metal wings a bit as they use some cleaner tones on the guitars and temper the onslaught of rhythm for a spell. The musical transitions and textures provide the kind of dynamics that make “Progress” a keeper. “Anti-Violent” goes from straight forward hardcore beat down to some progressive moments, still jam packed with groove and rhythm. I love the Arabic vocals interlude towards the end of the track, at least . . . I assume they’re Arabic. Nice touch!
As I mentioned, Progress fulfills all of my needs when it comes to metal. Okay. Maybe I could have a used a bit more melody, but I digress. Toxic Bonkers aren’t going for melody or anything sweet. They’re angry young men who are grabbing you by the ear to get their opinions listened to. So, do yourself a favor and just succumb for the half hour or so that they want to give you of their time. I’ve heard them categorized as hardcore. I’ve read someplace else that they’re grind core, while someone else called them death metal. Throw away the name calling, folks. They’re simply an extreme metal band that incorporates all of those mentioned genres, and a bit more. I hadn’t realized that they’ve been around awhile and this is something like they’re fourth album since the mid ‘90’s, but let me tell you. After I’m done writing this bad boy, I’m hoppin’ on eBay to see if I track their earlier stuff down!