A Sunday Conversation with Miggs

Smack dab in the middle of their U.S. tour for the immensly popular album, Unraveled, Miggs lead and hep cat Don Miggs broke away from his band duties and shared a few minutes with us on our comfy couch of questions. Here's what Don has to say about the art on songwriting.

When I was a kid, growing up in a house with Cat Stevens, Neil Diamond, Johnny Mathis, Perry Como, and Simon & Garfunkle, the first time I ever hear Kiss's "Detroit Rock City," it was a moment of musical epiphany. It was just so vicious, aggressive and mean. It changed the way I listened to music. I've had a few minor epiphany's since then, when you come across a band that just brings something new and revolutionary to your ears.

KISS played a part in my development, too! My uncle was a big fan so I naturally found myself there, too. I had several (epiphanies) along the way. There are some CD’s that I put on and couldn’t take off like U2’s Auchtung Baby, and they helped set a direction for my writing. That U2 record taught me about real emotion in songs and the power to set the mood and bring people somewhere. Counting Crows’ August and Everything after for it’s lyrical content. Afghan Whigs’ Gentleman for it’s raw power. It hit me so hard that I was disturbed at first. It had to grow on me. Of course, all the standard answers from The Beatles on up, but I love so much music, it happened again and again, and it’s why I’m so driven to write myself.
Talk to us about the song-writing process for you. What comes first, the idea? A riff? The lyrics? How does it all fall into place?
Ah, if it were easy and so predictable there would be more Beatles, no? I mean, you can definitely refine the process and create songs, but I think the truly timeless ones fall out of the air and into your lap somehow.
When I write, it’s never the same way. One line will come to me and it’ll snowball or not. Or, a riff hits me, or I sit down and it all just comes out. It’s an amazing thing to tap into and I feel lucky that it ever happen to me at all. 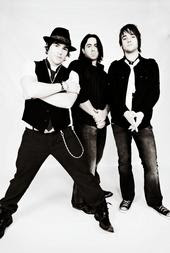 In songwriting, how do you bring the song together? What do you look for in terms of complexity? Simplicity? Time changes?
I try to leave all of that thinking out of it at this point. I spent a good deal of time learning the rules so I could break them. I think you have to know it all so you can not think about it. I love Coheed and Cambria as much as I do R.E.M., and they are opposites regarding complexity / simplicity. The best time changes don’t feel forced. We love doing them, especially in a “pop music” format, but we try to make it subtle.

It’s funny because we had people trying out to be the drummer last year and they didn’t realize all of the little time changes were there and some good drummers couldn’t make the cut because of it. But, I tend to try to say things simply and play them in a way that people don’t feel like you’re showing off.
What makes a great song?
Well, if I really knew this answer I’d have written 1,000 of them, but I think what makes a timeless song is all about the “Big 5.” A great song only needs 3 of the 5, but the really timeless ones have 4 or all 5. And, they are: The head, the heart, the stomach, the crotch, the feet.
What piece of your music are you particularly proud of?
Really, I’m only not proud of about 3 songs we’ve released and several moments on other tracks. Having said that, I have not written my favorite song of mine yet. Almost, but not quite.

When you write a piece of music, do you consciously write from the mind set of being different than what's out there now?
Nope. I just write and let it be what it’s going to be. Maybe after that, I’ll make some changes to have it lean one way or the other, but I gave up trying to write a hit or a “Rocker,” or whatever after our Insomnia album. Now, I write because it’s what I do and I hope other people are attracted to it.
The business of music is a brutal place. Changes in technology have made it easier than ever for bands to get their music out, but harder than ever to make a living? What are your plans to move the band forward? How do you stay motivated in this brutal business?
We’re musicians. It’s what we do. You can’t think about how brutal it is. Being a stock broker is brutal. Getting up at 4 am to drive a garbage truck is brutal. We all do it every day. It’s still better than any other job out there, to me. Thankfully, we are able to make a living at it outside of traditional ways. We are signed to a good label, we have a great team around us, and people come to shows and buy the music. Our plan is to bring music to people and they will decide if we should have a career or not. It’s been working so far. 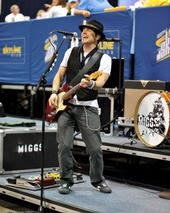 Describe to us the ideal (realistic) record label and how you'd work with them, and they with you.
We’re in a pretty good place right now with Rock Ridge. We license the album to the label and we own it. And, jointly, we promote it. That’s what we like and what we’ll do for the next one, too, with whomever we decide to sign with. We want a partnership. The label doesn’t have all the control any longer for artists like Miggs who can afford to do a lot of the legwork themselves.
Now that you've been on tour for awhile, I'm sure you've had some of those "Spinal Tap" moments. Share with us a couple of your favorite or more humorous moments.
Man, the road is its own animal and it’s so hard to truly relate unless you’re there. It’s like not really being alive for 23 hours and then so alive you’re jumping out of your skin for one hour each day!! LOL

We just played somewhere where most of the crowd was so drunk that it was like watching a movie! It was outdoors and the audience was on dirt/sand. These three people started doing dirt angels – like a snow angel, but in dirt – the two girls had no business being in the skirts they were in, laying on the floor spread eagle. And, probably had no idea they were on the floor! And then, another fine patron started stripping for us. And we got mooned. My first mooning on stage. This was the same woman who took her shorts and bra off inside of 20 minutes before we started. I think she was sweating . . .
We, at The Ripple Effect, are constantly looking for new music. When we come to your town, what's the best record store to visit?
We don’t really have a town!!! LOL! We visit a record store in every city. One, to be sure they have Miggs in stock, and two, because I’m addicted to CD’s. My iPod is just short of 19,000 songs and counting. I can tell you I love a few (stores): In Arizona, I love Rockzone Records, In L.A. or S.F., I love Amoeba, in Florida, I love Vinyl Fever . . . the list goes on!

Don, as always, thanks for your time. Any parting words for the Waveriders?
Be good to yourselves and kind to others, like is too freaking short.
Buy here: Unraveled

Bar L. said…
HECK YEAH! You know I LOVE Don and his band. This is a great review. There is something about them that is so appealing that definitely comes from Don's personality and who he is as a human being. Plus of course the music is so damn good.