Siena Root - Far From the Sun 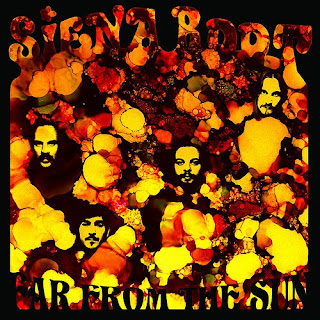 Come with me, oh waverider, into Professor Racer's incredible, stupendous wayback machine. That's it over there, the one shaped like a road-worn blue and white VW bus, but trust me, that's all part of the ambiance of where we're going. Today, we're turning the dials way to the left, scooting right past the eighties all the way to the seventies. And just for the fun of it, let's give it a little extra turn and see where that lands us.

I'll tell you where, smack dab in the middle of the amazing world of Siena Root.

While most rock retro-ists/psych revisionists set their sights on the mid seventies to find inspiration for their muse, Siena Root bypass most of the post-Sabbath inspired proto-metal, turn on their lava lamps with gobs of green bubbling fluid and bring us right back to the dawn of the decade. Shades of the '60's still lingering through their beautiful, at times ferocious, always mesmerizing retro-psych rock.

Formed in 1997 in Sweden (of course, the Pope and Racer's decreed mecca of all great musicality. What is it about that place, is every male child given a guitar at birth?) and signed to the mind-bending Transubstans label, Siena Root lose themselves in the freaked out, heavied out world of modern heavy psych. And few bands can do it any better. Incorporating a hefty leaning towards early Zepplin, blending in a touch of first generation Purple, and not being afraid to lose themselves in the vast hippiness of the Jefferson Airplane or Jethro Tull, Siena Root have created an album of stunning musicianship, mind-expanding jams and fascinating tones and textures. This isn't a fuzzed out stoner take on the seventies, this is fully infused, bong loaded to the spilling point, expansive psychedelia, rooted with the muscular backbone of the best heavy rock of the era. In short, there is no way to describe this album with frequent use of the world groovy. So grab your bell-bottoms, your Birkenstocks, and come jump in the Ripple VW bus, cause we got Siena Root playing at full volume and this ride is about to become one amazing trip. 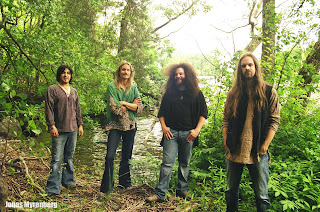 "Dreams of Tomorrow," starts us off, cowbell plunking into the opening hard rocking riff. Within seconds, you know you're in for something special. The riff, as simple as it is, still rocks with passion, and when the band zeroes into the groove, it becomes transcendent. There's just no other way to describe it. This is full-on, groove, heavy retro-rock and roll, so deeply enamored with its influences that you'd half expect to find Far From the Sun sitting comfortably amongst your stack of LP's, a big gatefold cover with large streak of resin in the crease from last nights joint rolling session. And that's about as big a compliment as I can give.

Sartex Faraj's lead vocals are laced with the soulful edge of a young Paul Rogers while KG West's lead fills sear through the disc like a laser show at the planetarium. This song is an immediate head bobber, subtly familiar in all the right places, yet new and fresh and infused with loving enthusiasm. And that's actually what Siena Root is all about. I refuse to call them seventies revisionists. In my mind, they're rock revitalists. Revitalizing the best of the past and adding their own flourishes from the present.

And that is actually something that can be said of the whole disc. When the crew break out the sitar for "Waiting for the Sun," and drop into a massive Jefferson Airplane vibe, you can feel so much joy in their playing that you can almost see them smiling through the speakers. They've got me smiling right now just thinking about it. Rooted with a full production that just breathes warmth into every nook and cranny, the band is clearly in love with what they're doing, finding terrific joy in playing, which makes the album just as joyful to listen to. Just listen for that full-on Purple organ breakdown 2/3's of the way, slashing back to the sitar, breaking down to a solo guitar playing the main riff, then the full band coming back in and locking into their groove. Joy, baby, pure freaking joy.

"Time Will Tell," brings on a more muscular riff, perhaps a lost page from a Free album. Soaring lead guitars tears through the opening before the Purple organ comes crashing back in, adding texture to the riff, filling it out. An acrid smoke billows out of the Ripple VW bus's rear windows as the road veers in and out of view, lost in a haze of powerful psychedelia. As with most tracks, the crew never hesitate to change their timing on a dime, dropping down into slower passages or launching into a new, mightier riff. The entire album has an undeniable free form feeling to it, space created to allow lots of hallucinogenic jamming, but never at the expense of structure. In fact, one of the most amazing things about this disc is that most songs clock in at under six minutes, yet feel as expansive as the universe. You'd swear they were ten minutes each. With all the jamming, all the circular melodies and cosmic explorations, the boys never lose sight of that all important foundation, keeping the songs locked firmly in the here and now without ever becoming self-indulgent or a mockery. Simply beautiful craft. 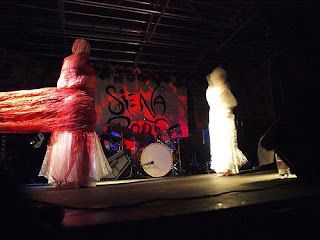 "Almost There," begins with a stuttering riff leading to a full-on rocking bridge before the chorus literally rises from the disc to inhabit some time and space beyond definition. A place of swirling, soaring hippiness, before the whole thing drops on the head of a pin, breaking down into a mid-tempo swinging blues beat. Unexpected twists and turns like this greet you at any moment on this disc, each riff melding perfectly with the next in ways you'd never expect possible, and certainly not capable in the hands of a lesser band. Groovy, baby.

I could go on and on, but I'll spare you. Suffice it to say, Far From the Sun probably spent more time in my CD player before actually getting reviewed than any other disc I can remember. In short, I just didn't want to actually finish listening to this baby, didn't want to write the review and be forced to move the disc from the player back into the Ripple Library. I just didn't want it to end. And I still don't. You can't make me stop listening to this baby, you just can't!

So if you don't hear from me for a while, oh waveriders, look out for me on the freeway somewhere. There you'll find me, behind the wheel of the bus, driving from town to town, grooving out to Far From the Sun, spreading the word on this masterful work of blissed out, rocking, bong shot of psychedelia. Maybe soon, me and the bus will head into your town. And we can listen together. Now that'd be groovy!

Buy here: Far From The Sun