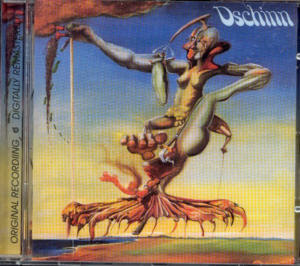 It wasn't just the Brits and the Americans who were waving the flag of change as the heavier vibe of proto-metal began to rear its ugly head in the til-then-glorious-world of psychedelic rock. Never ones to be left out, yet fully determined to do things their own Teutonic way, bands from Germany latched on to the new, heavier, darker vibe, added in their own mix of influences and proceeded to blow several minds apart at the medulla oblongata.

Krautrock, defined by a move away from standard song structure and wild experimentation, all anchored by an immovable motorik 4/4 beat, took the concepts of proto-metal and rocketed it off into outer space, flying on cosmic bouts of jamming and the precocious use of synthesizers with bands like Neu!, Can and Amon Dull II. While the genre of Krautrock is a separate, wholly worthwhile monster to explore, for the sake of the proto-metal report, we're most interested in those German bands that took the psychedelic exploratory vibe of the Krautrock movement and fused it to an immensely heavy Sabbath inspired bottom end.

Which brings us to Dschinn.

Far too straight ahead to comfortably fit with in Krautrock, Dschinn nevertheless explore their deeply heavy groove unlike many other proto-metal bands of the period. Featuring soaring, out of the stratosphere soloing without ever losing the basic metalesque riff, Dschinn crafted one glorious album of groovy German heavy hippy rock before fading away into oblivion. But what an album it is.

Listing to Dschinn, you can certainly get the feeling for where bands like Colour Haze and Dead Man draw their influence. Mining a fertile field most similar to their own countrymen, The Scorpions on their Lonesome Crow disc, Dschinn is a slab of molten Sabbath inspired psychedelic bluesy, neo-folky blistering rock. Peter Lorenz's lead vocals most closely resemble a young Lemmy if he'd only just learned English and gargled daily but forgot to spit, featuring that same warble of trying to wrap his throat around the English words that can be heard in Klause Meine's vocals on the earliest Scorps records. Each track roars or purrs off this disc, streaming off Bernd "Capo" Capito's lead guitar, Silvio Verfürth's rolling, looping bass, and Uli Mund's explosive, Ward-esque drumming.

While Lonesmome Crow is without a doubt the best starting place for the uninitiated to understand these guys, Dschinn is a much more straight ahead rock album than the Scorpions first disc. It also manages to avoid all the fey neo-psychedelic folkiness that can bring down the velocity of Lonesome Crow. "Freedom," probably the closest thing these guys would've had to a single, undulates out on a fantastic swooping bass line, and pounding drum before latching onto the wah'ed out riff. Imagine Colour Haze doing what they do now, but back in 1972 and you'll get the feeling. Not quite as heavy as Sabbath, this song still packs raw power, riding across that amazing warbling vocal. "Fortune" follows suit, but downtuned and heavier, mining that deeper vein in the main riff, before dropping down into quasi- psychedelia. Picking up for the chorus, leads fills fly out fast and furious, the bass picking up steam like an out of control locomotive.

"I'm in Love," one of my favorite tracks, blasts off with an ascending, circular bass riff, Mund going freaking bananas on the drums around, behind and on top of the riff. "Train" roughs up the sound, adding a wailing harmonica over the sludgy doom riff, a la Sabbath's "Wizard." Trust me, this song never loses it's groove, bopping in and out of its doom riff and scorching guitar and harmonica leads. As Lorenz wails out "Let's make tomorrow brighter/if your heart's in the right place/right now," it also illustrates another difference between Dschinn and other proto-metal bands, a definitive lack of the doom-drenched angst that heralded the crash of the sixties. Here the boys are still hippies at heart, just wailing away meaner and harder than any standard AM pop band.

"Let's Get Together," rides this hippy-vibe over a long polyrhythmic intro jumping straight into the hard-edged guitar parts. "Smile of the Devil," is a somber, brooding number, tracking into the album's highlight, "I Wanna Know," featuring Lorenz's vocals warbling away like never before and the boys locking down on a downright mean, funky-ass riff. This song represents all that is classic about proto-metal, fierce in it's intensity, meandering in it's scope. Listening to this and you can definitely see where Colour Haze and Dead Man found part of their muse.

"Are Your Ready," is another straight ahead rocker, leading to a freaked out, proto-metaled out, ballsy remake of the Yardbird's "For Your Love." A definite treat to behold.

Fans of proto-metal will not want to miss this lost classic. And to sweeten the pot even more, the CD reissue by Second Battle (if you can find it) tacks on an additional 8 early Dschinn rockers from before the boys recorded the Dschinn album and 3 outtakes from the Dschinn album itself. A benevloent bevy of blistering batteram rock and roll. Not to be missed.

Thanks for your comments, guys. It's definitely an album worth checking out.