Patrick Droney – The Other Side 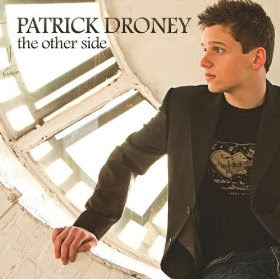 Life just isn’t fair.
When you’re a fifteen year old boy, you’re supposed to be out playing stick ball, sneaking off behind the bleachers with your high school honey, and playing some interactive video game with a kid of similar age in Belgium. When you’re fifteen, you’re not supposed to be releasing your first album of guitar oriented rock tunes. Nor are you supposed to be two years removed from being awarded the Robert Johnson Star Award for being the country’s most promising blues player. Someone forgot to tell Patrick Droney all of this.
In my hot little hands, I hold a copy of The Other Side. Not knowing anything about our young master Droney other than he was some blues protégée, I expected this album to be a straight up blues burner. But what I got was something so much more fascinating. The Other Side fits more comfortably alongside something from 3 Doors Down or label mates, Miggs, than your classic blues artists. However, with that being said, Droney can whip out the blues with the best of them. One part rocker, one part ballad, one part blues, throw in a touch of metal muscle and you have the album that made The Delta Mud Skipper peer over his copy of the Blues Review and take notice. That, my friends, should be enough for you to drop everything and track this sucker down! But please . . . continue reading. My feelings might get hurt if you don’t.
Patrick Droney does a wondrous job of putting together twelve tracks that are packed with melodic intrigue, all nicely wrapped around a variety of musical approaches. The first couple of tracks are attention grabbing rockers, “Need Me Now” being a fairly straight up rocker, while “Everything” is more slowed down with acoustic flourishes. The acoustic guitar rhythms for “Everything” compel me to sneak the occasional glance at my old acoustic. Both tunes just explode with melody at the choruses, making these tunes perfect residents to any rock radio station. And, to make the songs that much more intriguing, wait until your ears latch onto the guitar solos! C’mon . . . we’re talking about a fifteen year old guitar protégée. You didn’t think there’d be guitar solos? Technically sound and emotionally packed solos for both of these tracks, especially “Need Me Now,” which actually made me rewind the first time I heard it. 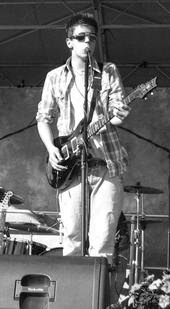 Droney takes the album in bit of a heavier direction with the “Alive,” “Bring You Back,” and “Save Me.” He darn near flirts with heavy metal as the intros to the songs burst with some ballsy distorted guitar work. But, the tunes never go to that dark place like the metal I generally call food. Patrick’s gift is all in the melody. Amazing, uplifting and soaring melodies comprise the choruses throughout the album. Oh . . . and before I go too far, let me make mention of his voice. I remember being fifteen and I couldn’t look my elders in the eye, let alone sing about love found, love lost. Patrick sings with the confidence of a man who’s been there and done that. Aged well beyond his years, our fine master Droney sells the good and bad times through his vocal work. Check out the vocal performance on “Alive” to see where I’m coming from. “Bring You Back” will have you bouncing in your seat with it’s up tempo groove. “Save Me” starts off as if it were meant to be on a Linkin Park disc before breaking down to give us Patrick’s voice suspended over the instruments. Another beautiful chorus on this one, folks.
The title track gives us a glimpse of some his blues-ier work as the tune kind of wisps along rather than bowl us over. “The Other Side” slowly levitates from the ground with a clean guitar laying down the rhythm and an organ subtly humming in the background. His voice chimes in with a soulful timber and that aforementioned age beyond his youth. The chorus erupts into a brilliant melody, all made more vibrant with the use of harmonized background vocals. The song climaxes with an understated, yet perfectly played guitar solo that is teeming with emotion. Watch out, Waveriders . . . there’s a new guitar hero on the horizon. And what he’s doing that’s gonna’ give him longevity is incorporating outstanding guitar work within the context of well written and memorable songs. 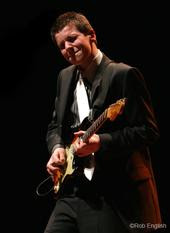 The last four tracks of The Other Side are more of that straight up blues style that I was initially expecting, but let’s face it, Patrick Droney has thrown curve balls this far into the album, what’s to say he’s not going to put his own fingerprint on this stuff as well? Exactly. Nothing. Yeah, the tunes have more of a blues feel, but there’s that undeniable Droney sound (yes . . . it’s official. Patrick Droney has his own sound.) Rather than being content in just playing the blues straight up, he’s mixing his own flavors into the brew and creating an intoxicating new taste. A little tinge of metal here and there, but mixed into a blues groove or rhythm, Droney’s shaking up a style that could use a new voice.
I’ve made a lot about Patrick Droney’s age, but let’s not make this album all about that. It’s really about the music and how damn good it is. What compounds the quality of the music is Mr. Droney’s age and that we’re conditioned in this society to think of art created by adolescents as quaint or novelty. The Other Side is a vibrant, youthfully exuberant disc of blues based rock from the perspective of a guy who, for all intents and purposes, loves to play music. From the soulful vocals, to the impassioned guitar playing, Patrick is on the cusp of doing some great things. Hopefully, he won’t become another rock ‘n roll casualty and get caught up in the nonsense of the business. I’ll be curious to see what the future holds and how he develops this sound further. I mean, c’mon . . . those melody’s are contagious, and the guitar work is out of this world. Leave it to our friends at Rock Ridge Music to land yet another fantastic artist. How do you guys keep doing it? - Pope JTE

Buy here: Other Side

Anonymous said…
I JUST GOT THE ALBUM AND IT'S INCREDIBLE. IF YOU HAVEN'T HAD THE PLEASURE OF HEARING IT, RUN OUT NOW AND GET A COPY. PATRICK'S ONLY 16, BUT THAT'S NOT AN ISSUE WHEN IT COMES TO HIS GENIUS SKILLS AND MAD VOCALS!
November 5, 2008 at 10:27 AM