Ogre - Plague of the Planet 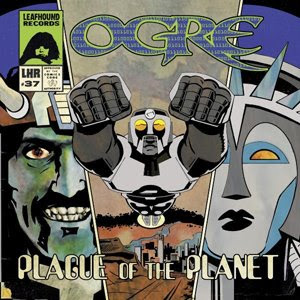 Coming at you with more ferocity than an army of orcs freshly borne from the muddy, stink-filled pits of Modor, Ogre is one mean, nasty beast, breathing the fire of some of the nation's best underground Sabbath-inspired doom metal and is just screaming to be heard.

Now if that sentence seems like a mouthful, let's break it down one step at a time and shine the microscope on this freaking epic undertaking of riff-mongering metal. Ogre, a three piece from Maine, had previously burst onto the scene spewing their twisted brand of fantasy rich, futuristic sci-fi doom metal with such albums as Dawn of the Proto-man, Unleashed from the Northwest, and Seven Hells. Each album found them spawning their own mind-bending mythology of dogmen, the Colossus and the Proto-man. Personally, we think the Ripple Effect should be in there somewhere, but we'll let the boys slide on that one.

Now, don't let any of this sci-fi talk scare you. The story, as timely and provocative as it is, involving oil, war, death, environmental decay and too many other cool sci-fi-isms to mention without signing the band up for a weekly TV show, is only part of the deal. The rest is the music, and that, my friends, is where Ogre really becomes a beast. Ross Markonish, while rarely a shredder proves to a be Merlin at the riff, throwing out shades of Sabbath or Pentagram at a whim, then dropping it down into a bluesy ode or a psychedelic, effect-washed freakout without ever breaking a sweat. Will Broadbent pounds the drums with the ferocity of a battletroll crushing heads with a spiked mace, and Ed Cunningham may be one of the underground's most unheralded vocalists. While some may find a shade of Ozzy in his voice (easy to do in context of the Sabbath-rich tone of the album) in reality he sounds more like Bon Scott after the thorazine has worn off. A dynamite, expressive voice with enough range, angst and shrill to bring Ogre's haunting tale to life and shove that passion right down your gullet. 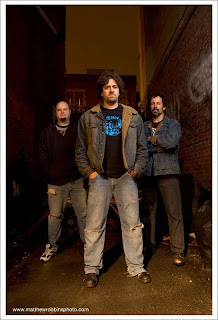 And what a tale it is. Told as one 37 minute doom rock epic, Plague of the Planet, is broken up into 11 parts, building on repeating passages like a classical composer builds on a base of repeating themes. Starting off with the gentle, acoustic "Requiem," Markonish builds a prelude with delicate beauty before the armies of hell are unleashed in a pulverizing, descending monster of a riff. This is an ogre all right, mean and nasty and smelly and just fucking perfect. Cunningham's voice goes through acrobatics of rage and emotion while the riff pounds on, second after second, building like the assembling of an army. Finally, when the song explodes nearly four minutes in, we're left with the charging Sabbath riff of "Drive," blasting across an apocalyptic wasteland. With no pun intended, this is a driving beast of a song, pummeling you with the force of a thousand proto-men, ogres, trolls or whatever warted beast you wish to summon.

"Queen of Gasoline," drops the bottom out, plunging down into a stuttering, near catatonic wreckage of metal. This is Ogre's "War Pigs," and all the better for the comparison, a fierce, spit in your face blitzkrieg of environmental warfare. Forget Ozzy, just listen to Cunningham lose his frontal lobe singing this baby, Broadbent's drums clearing the way of all riff raff as he bashes away like a blacksmith at this anvil. As the psych-doom gets heavier, the Ogre-beast revisits the stunning riff of "End Days," before losing itself into the sci-fi netherlands. Upon touching back to terra firma, the boys drop down into a near-beautiful, Colour Haze moment of gentle psychedelic riffing demonstrating a remarkable moment of subtlety for this rampaging machine. But don't worry, the boys haven't gone soft. As "Battle of Doom Capital," explodes in moments of fury punctuating the quiet.

From that moment on, the album loses itself in a shocking haze of blazing guitars, charging riffs, sci-fi ruminations, Pentagram heaviness and a handful of illegal substances. Finally, as the disc comes to a close, sweat beading your brow from the pummeling work-out you've just witnessed, the boys retreat to the delicacy of the opening "Requiem," acoustics, perhaps showing that beauty can return to a place once so hostile. 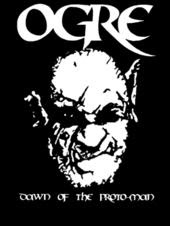 No matter how you slice it, Plague of the Planet, is an awe-inspiring epic of grand ambition and determination. Just check out that awesome Kirby-inspired cover art provided by the multi-talented Broadbent and you'll get a feeling for the golden age of epic comic book/sci-fi storytelling these boys have mastered. As far as Doom metal goes, there is very little that can come close to matching in terms of scope and breadth. And unbelievably, the Ogre-men have got enough chops and muscle to pull it off, convincingly, unabashedly. While mention has to be given time and time again to the inspiration of Sabbath and Pentagram and other heavies who crushed the soil before the Ogre-men, in truth, the album is much more than the sum of it's influences. Like Voivod at its finest, or moments of Rush, Ogre has created an entire universe of its own rock mythology and pulled it off convincingly. And in the process, Ogre transcended all of its influences, finding it's own voice of doom and apocalypse and power.

In the end, Ogre has become a beast. And what a gorgeous beast it is.

Buy here: Plague Of The Planet

Metal Mark said…
I was just writing about the cover of this one at my other blog.

This album is killer, it's like a big swirl of Sabbath, Pentagram, Saint Vitus, AC/DC, Budgie and Cirith Ungol. Just fantastic doom all pulled out and heavy just like it was meant to be. I have an interview out to them so hopefully I'll get that back some time soon so I cn post it.
October 11, 2008 at 4:28 AM

Metal Mark said…
ooops, meant to say I was writing about the cover of their debut although all of their covers are pretty cool and fairly different.
October 11, 2008 at 4:31 AM