Elvin Bishop - The Blues Rolls On 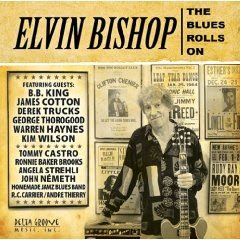 You have to earn your stripes to be called a legend.

After 40 years of bluesing it out in the business, Elvin Bishop has certainly earned the reputation of a legend, easily one of the most respected living white blues guitarist of his generation. From his early days on the mean streets of Chicago, to his genre-bending stint with the Butterfield Blues Band on to his own solo work, Bishop has been there and done it all. Widely recognized as a master of the slide guitar, Bishop's last album, 2005's "Gettin' My Groove Back," touched the blues charts, peaking at number 9.

Now, the master is back, and this time he's packing some heat. Armed with an army of good friends, collaborators and a few newer members to his posse, Bishop jumps back into the studio, unleashing a star-studded blues workout. Stepping aside to take the role of master of ceremonies, Bishop's not afraid to share the spotlight with blues legend and newbie alike. As an older statesman now, The Blues Rolls On is a look back at his roots, his legacy, and a simultaneous passing of the torch to the next generation of blues mongers who'll keep the life of the blues rolling on for years to come.

It's too much to detail every track here, but with a guest list that features, B.B. King, James Cotton, Derek Trucks, George Throrogood, Warren Haynes, Kim Wilson, Tommy Castro, not to mention the dynamite vocals of John Nemeth, you know you're in for a good old-fashioned 12 bar boogie woogie blues treat. And a treat it is. With enthusiastic performances and an obvious affection for the guest of honor and the music, this is a rolling good time. 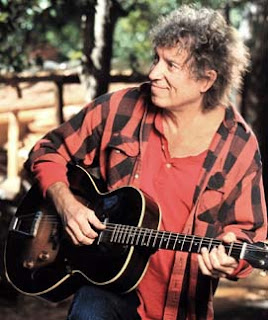 Now we're big blues fans here at the Ripple office, and even got our own full-time blues correspondent, The Delta Mud Skipper, who spends his days doing nothing but wallowing in the blues. I got hooked on the blues when I lived in Houston, Texas, a place where blues bleeds through the walls. I spent many a night, ankle deep in sawdust shooting pool, sweat dripping from my brow on a hot and sticky Houston night, wolfing back some Bar-B-Q and washing it all back with a frosty beer, and I'll tell you, this CD is good, pool playing, brisket eating, hot and steamy blues.

"The Blues Rolls On," rolls out first, Kim Wilson blowing a vicious harmonica over Elvin and Warren Haynes's percolating guitars. Elvin takes lead here, his voice leathered and whiskey and raw and bleeding everything that is the blues. "Yonder Wall," a tune from the Butterfield Blues Band days, eeks out raw and pained, aided by some great Tommy Castro guitar licks, while Elvin pulls out all the stops on the remake of his own'70's hit "Struttin' My Stuff." Updated, rocked up and funked out for the new millennium, Derek Trucks and Warren Haynes dig in deep to play off of Elvin's guitar. Probably the best track here and an absolute toe-tapping, finger-snapping classic.

"Keep a Dollar in Your Pocket," a great duet with B.B. King adding Lucile to the mix is a bit of a revelation. Starting off and finishing up with a brief bit of dialog between the two masters, the obvious affection they have for each other is instantly recognizable. And judging by the tone B.B. digs our of Lucille, he's having just as much fun playing with his good friend as we are listening to it.

"Who's the Fool," featuring a smooth-throated John Nemeth, is a boiling, rolling number, smooth as an aged whiskey and just as strong. Nemeth's tone rolls out like a young Robert Cray, gracing effortlessly between the deeper resonating tone and the higher, emotive notes. Kid Anderson and Mike Schermer add some tasty leads while our master of ceremonies hangs on to his slide.
"Black Gal," is a back porch, acoustic blues burner, R.C. Carrier singing and playing the rub board as if he was hanging out on the patio of his Mississippi home, waiting for the catfish to fry. Andre Thierry's accordion rolls across this number, painting wide washes of sound over Elvin's guitar. 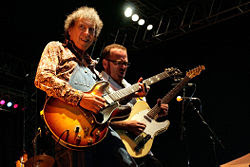 While "Oklahoma," a solo Elvin vocal and rough and raw guitar number will rightfully garner a bit of attention, and the George Thorogood," Send You Back to Georgia," is a rocker, I gotta say, I was blown away by "Come On In this House," with Elvin jamming with the Homemade Jamz Band, a Perry family collaboration of three frickin' precocious kids, standing right next to the big man, belting it out on vocals, guitar, bass and drums. And when I say kids, I mean kids. Take the drummer for instance. I don't know how old she is, but from the photo Taya Perry's got a ways to go before she becomes a teenager, and I swear to God, you'd never know it from listening to her lay down a rhythm. Yes, Elvin, the blues will roll on as this generation takes it with them for the years to come.

While star-studded affairs like this, recorded in different locations, often suffer from a lack of continuity or cohesion, Elvin's warm tone anchors this baby. And with the help of a bunch of immensely talented folk, who obviously jumped at the chance to share their gifts with the legend, The Blues Rolls on is a fitting high-water mark in the blues cannon.

Buy here: The Blues Rolls On

Anonymous said…
You gotta love Elvin Bishop. While we were on vacation in Boston this summer, went to see Buddy Guy and George Thorogood...about halfway through Thorogood's set, we were blown away when Elvin came out and did "Don't Let the Boss Man Get You Down". One of those wonderful little rock & roll surprises.
October 15, 2008 at 9:46 AM

Bar L. said…
Oh my gosh, I would be aging myself big time by telling you this but what the heck....my very first concert of all time was Elvin Bishop. I was in high school...barely. I'll always remember that night because the music captivated me and I thought "I am going to see as many concerts as I can". So far so good :)
October 18, 2008 at 9:01 PM